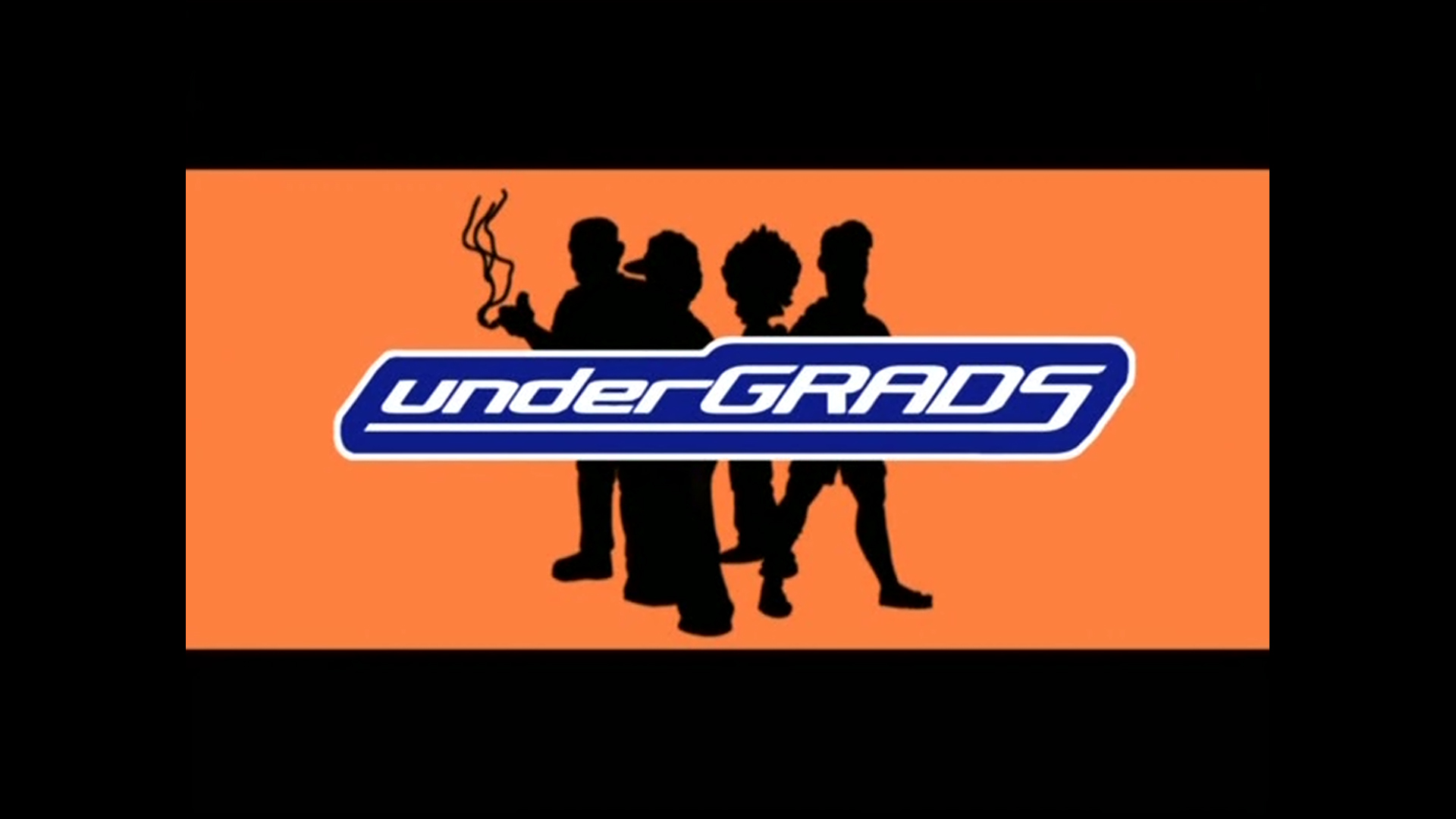 "How many times have I told you guys: Stop telling me to go to Hell!"

As Animation April continues, I wanted to revisit a show that I think many people my age have either seen or heard of. That show is, of course, Undergrads.

Undergrads aired in 2001 on MTV and was created by Pete Williams, who it should be pointed out voices all four of the main characters which we'll get to in a bit.  Undergrads came into existence after Williams himself dropped out of college around 1997 or so. The series was something that Williams was passionate about, and he wanted to tell the story of a group of childhood friends who go off to college and how they try to maintain their friendship.

The four friends are Nitz, Rocko, Cal, and Gimpy. The intro for the show, which you can watch here, establishes that the four friends have known each other since they were infants and have grown up together. They took on the name "The Click," which is also the name of the Good Charlotte song that plays over the intro.

The four have vastly different personalities, Nitz, the main character is the straight everyman who is trying to understand this whole college thing and his trials and tribulations to get noticed by the girl he's had a crush on for years. Rocko is the drunken lout who believes college is like Animal House despite being told repeatedly that it's not. Cal is the not too bright ladies man who despite never seeming to have to put any effort into it, sleeps with nearly every woman he encounters and also ends almost every sentence with "guy" (seriously, if you watch the show, you'll have "hey guy!" stuck in your head for WEEKS). Finally, Gimpy is the highly intelligent nerd who doesn't leave his room, loves Star Wars, and talks about nerd stuff that the average person couldn't care less about.

If I had to choose characters that I sympathize with, it's very obviously Nitz and Gimpy since Nitz covers my fears of socialization, and Gimpy is pretty much my nerd side. Rounding out the cast and not voiced by Pete Williams is Jessie, voiced by Jene Yeo, Kimmy voiced by Susan Quinn, and Gimpy's right-hand man Mump who is played by Robert Tinkler.

I should point out that none of these people have had vast careers in the TV or Movie industry as actors post Undergrads, according to IMDB.  Tinkler has probably had the longest career as he has had credits in several shows, including Bakugan: Battle Planet, and Hatchimals, both of which I somehow have heard of.

As to the story, Undergrads covers the Freshman year of the four friends and the trials and tribulations that come from not being together. The show maintains a somewhat standard "problem of the week," ranging from financial aid to making new friends to college traditions and parties. The episodes primarily revolve around Nitz, but Gimpy and Rocko tend to have secondary stories in the episodes.

I will admit this freely, I feel quite a few episodes of Undergrads. Nitz's fears about social interaction, especially, are something that I have dealt with. Episode two, titled "Traditions," hits close to home, when Nitz refuses to do a campus tradition of running nude through the campus with the other freshman. Nitz thinks the whole thing is stupid as he is self-conscious about his appearance/weight. However, Nitz flashes back to a moment in high school when the rest of the Click is getting ready to go to Prom, and Nitz remarks, "High School traditions like prom are stupid just wait until I get to college when they have actual cool stuff to do!"

That line! That line hits me because I had similar thought processes when I was at the age when Undergrads first aired. Nitz realizes by the end of the episode that he doesn't want to go through life and be afraid of experiencing anything, so he runs nude with the other freshman and has a great time.

Another episode that hits me is Episode 4, "New Friends." When Nitz's birthday is approaching, he thinks that the rest of the Click will help him celebrate it as they always do. However, when his friends are all involved with a competition that Gimpy has with some Star Trek nerds in his college and forget, Nitz is upset, and Jessie (who I'll cover more in a bit) helps him by having him hang out with her and her friends.

It's the first time that Nitz goes outside of the comfort zone of his friends he grew up with, and the entire episode can show that even if people care for each other, you sometimes aren't able to be there for each other.

Nitz also pines after Kimmy, a girl who he's had a crush on since High School. Kimmy is one of the season-long plot threads, as Nitz is constantly trying to figure out a way that he can have a relationship with her. However, in his dreamy obsession with Kimmy, he pretty much ignores Jessie, who is the ultimate chill girl you'd want to hang out with.

She's funny and doesn't let Nitz hide in his shell. In terms of friends, she was close to, if not, the best anyone could have. Jessie also very clearly seems to have some feelings for Nitz, but Undergrads doesn't do the "shot on Jessie's face showing her feelings for Nitz" that a lot of other shows would be tempted to do. By the end of the first (and so far only season), Jessie has pretty much had enough of Nitz's shit, and I damned near cheered when she called Nitz an asshole and said how blind he was for not noticing that she had developed some feelings for him. It's a real moment and something I'd expect from the Jessie character.

The animation for Undergrads is what I would call decent to good. The show doesn't have any animation I was wowed by; it's pretty standard, but all of the characters are unique and memorable. I actually could believe that almost everyone was potentially a real person.

Some things I don't like about Undergrads. I have issues with Cal. Cal, to me, is problematic because while he does have some funny moments in the show, he just gets laid the entire time and says, "Hey guy." Nitz, Gimpy, and Rocko all have their characters grow and change in some way throughout the season, but Cal was always the weakest link to me since he never really has those "moments."

I should also mention Rocko has treated Cal like complete shit their entire lives, and neither Nitz nor Gimpy ever seem to call Rocko on it. The show also dips into a bunch of standard cliches about the college experience which you've seen before. I will even admit that Nitz never seeming to realize that Jessie had a thing for him that will ALWAYS annoy me.

Oh Jessie, you're too awesome for him

Undergrads, as mentioned above, only got one season, and it was a flop. Canceled by MTV, Undergrads gained a cult following in the later years. Pete Williams created a Kickstarter for Undergrads: The Movie in 2018, and it received over $100,000. Williams has said that the movie will serve to close out the Undergrads story, and honestly, I want to see it and hope it gets made. There's even a Facebook page to Bring Back Undergrads, not bad for a show that is almost 20 years old.

Undergrads definitely has some problems; it's not a perfect show, and honestly, many younger people might not get as big a kick out of it as I did. As I said earlier, I identified with Nitz and Gimpy. Honestly, the struggle of trying to keep your group of close-knit friends together as you all start to travel your different paths in life is something I could understand and sympathize with.

The show is also chock full of nerd culture references, which obviously is right up my alley, but I feel the show will connect with you more if you have a more personal connection to one of the four main characters as I did.