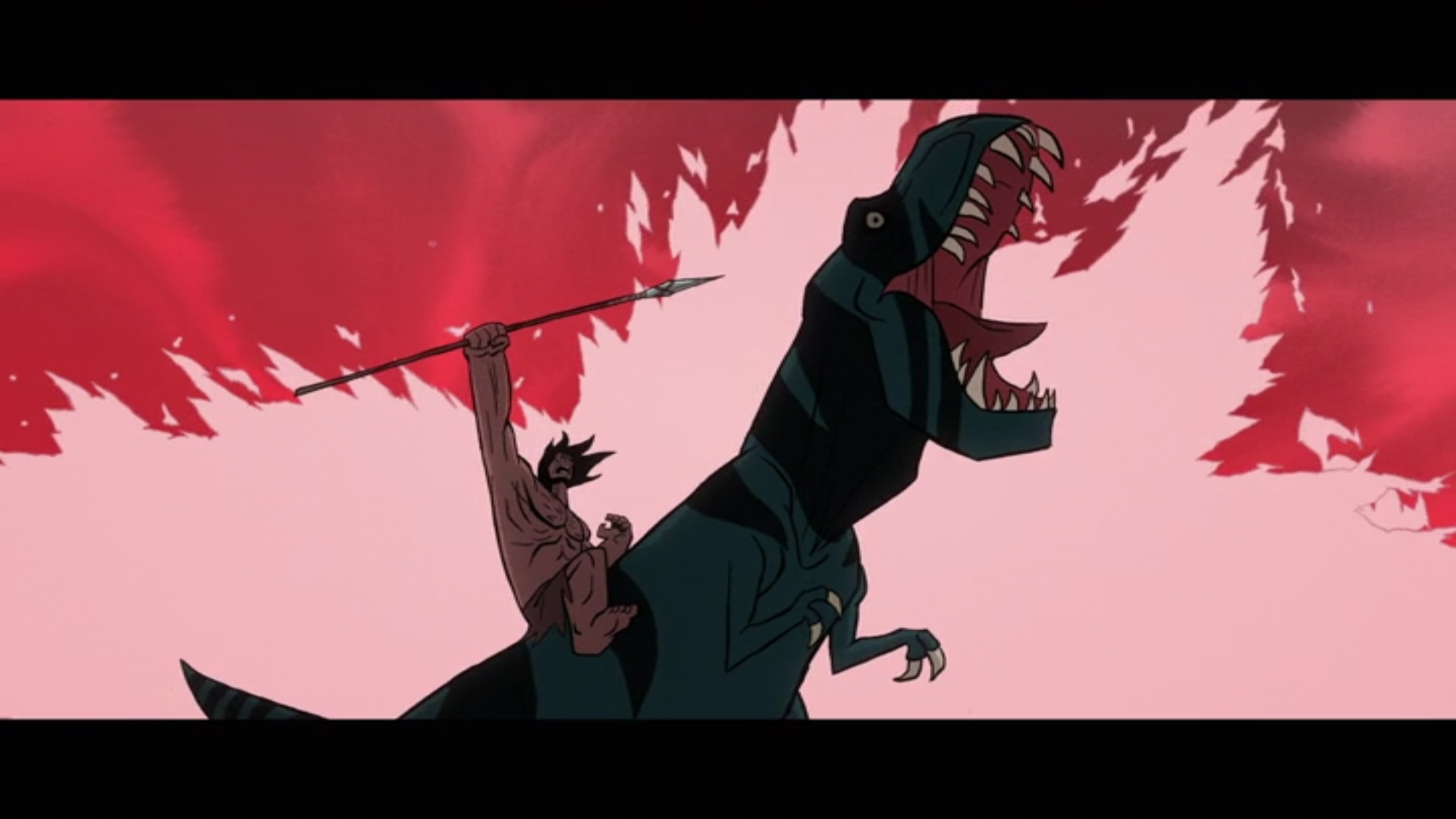 Genndy Tartakovsky has had a massive influence on what I can call my late childhood to early adulthood. For those who may not know who he is, Tartakovsky has created or had his hand in several animated shows that are considered all-time classics. Those include Dexter's Laboratory, The Powerpuff Girls, Star Wars: The Clone Wars (The original animated version), and of course, Samurai Jack.

Tartakovsky found even more mainstream success with the Hotel Transylvania franchise, directing the first three movies and writing the fourth one due in 2021. While I've only watched the first one, I found it to be positively delightful and was glad that Tartakovsky got even more notice than he previously had.

However, he never seemed fully content with going the CGI route of animation, at least not to the degree that others may have. While original animation studios like Disney or Dreamworks have transitioned away from traditionally animated movies or TV shows (yes, there are a handful of exceptions), Tartakovsky is a man who had a vision for what he wanted to do. In 2015 he returned to Cartoon Network's Adult Swim, where he created the final season of Samurai Jack. While that show deserves an article of its own someday, I will say the last season was utterly fantastic in every respect. But Tartakovsky still wasn't done. In May of 2019, it was announced that he was commissioned to work on a new series called Primal.

I had been aware of Primal for some time, being a lover of Tartakovsky's work, and had seen some images here and there, but I saw the trailer, and then? Nothing. It wasn't until late last year that I finally saw that episodes were available for purchase on streaming sites and that I realized the show had finally been released.

Primal takes place in a world that feels like it could have existed but never did—a world where cavemen and dinosaurs exist together and not in any kind of harmony. We are introduced to the main character whose name we never learn (more on that later) who is out fishing, and right away, Primal wants you to know that this isn't your traditionally animated show. The caveman catches a fish and hooks it through the lower mouth, blood spilling from it as it slides down the line to join a host of other caught fish.

The caveman, content with life, takes his catch and starts his trek home, a small wisp of smoke burning in the distance. He hears screaming in the distance before he gets there. Running back at a dead sprint, he witnesses his partner and two children get violently killed and eaten by a trio of Tyrannosaurus Rexes.

As is evident, Primal is not fucking around with its display of violence, and it is something that the show pretty much shows you from the get-go. It genuinely shocked me to see that type of brutal violence, but it is a hallmark of the Primal world; there isn't any comfort to be had here. Enraged at his loved ones' death, the caveman suicidally attacks the three T-Rexes until they get called away by a fourth, much larger rex who I assumed was their mother. What follows is a genuinely fantastic scene where the caveman climbs up a mountain and seems like he is about to commit suicide, and this is where something hit me about the show. 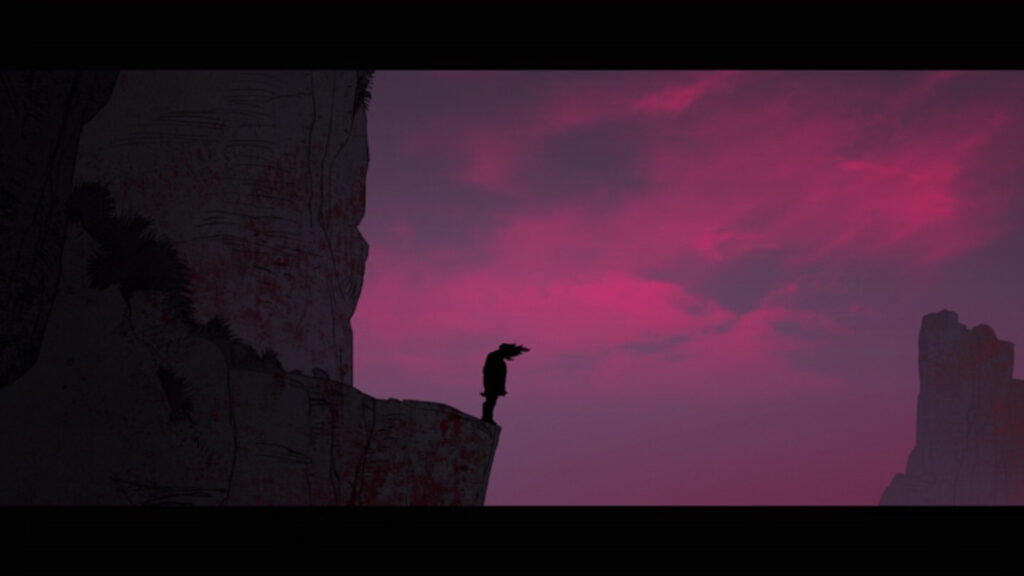 There is no dialogue.

Seriously, for all intents and purposes, Primal is almost a silent TV show, and I mean silent in the sense that there is not a single spoken word in the first 9 of 10 episodes. The only communication is done through screams and grunts; you don't know what the main character is saying, but you understand the meaning. The animation and the music must carry the load of delivering the story to the audience, and I will admit that Primal was utterly unique at this.

The main character's name, Spear, is only told to us by the title of the first episode, never in the episode itself. Spear is both his name and his primary weapon. With not a single remark, I was able to comprehend how utterly devastating the loss of his family was to Spear and how mournful his existence is without them. In the early episodes of Primal, Spear suffers from what can be described as PTSD. Once again, all of this is told to us with sound and animation.

Spear is only one half of the duo that makes up Primal; the other half is met not long after Spear's own tragic back story when Fang, an undersized T-Rex with one oversized tooth, and her young babies are attacked by the same group of Rexes that killed Spear's own family. When her babies get eaten during the fight, both Spear and Fang work together to slay them. Primal's first episode ends with one of the most "Okay, I need to see more" moments ever, a caveman on the back of a Dinosaur. 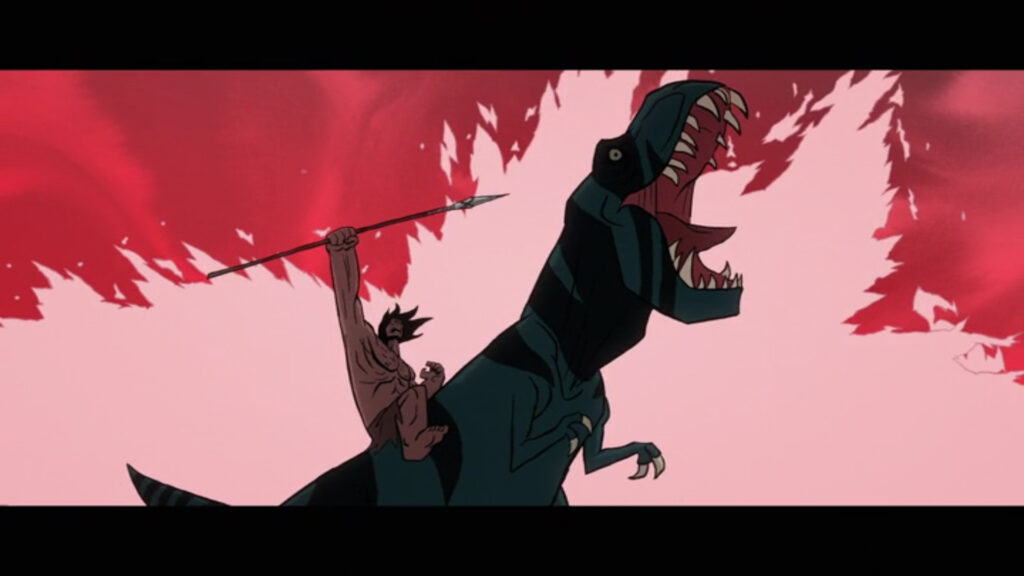 Primal doesn't just have the pair embark on their adventures right away. There is mistrust and anger between the two in the second episode. They fight over food, and it takes another brush with death to finally make the two work together and form more of a bond, and thus, we go full-on into the adventures of Spear and Fang. Pretty much every episode in the first season of Primal centers on their journey through the world. They are simply wandering together with no real overarching story. Now, I'm often against "creature of the week" shows, but Primal does this excellently.

The episodes themselves range from sad and somber—"A Cold Death" to the thrilling and terrifying "The Night Feeder" are two that immediately come to mind. There are two more episodes that I picked out to briefly discuss. The first is episode five, "Rage of the Ape-Men," where Spear and Fang encounter a semi-organized society of apes that attempt to use Fang as a proving ground for their fiercest warriors. The warrior drinks a single drop of a mysterious black liquid that gives him super strength, and he proceeds to completely wreck Fang. However, Spear manages to break free of his bonds and drinks the entire bowl of the black liquid, which causes him to hulk out.

What follows is about a minute and a half of some of the most violent animation I have ever seen; we're talking Heavy Metal levels here. Spear goes completely ham on this society of Ape-men and pretty much annihilates them to the last. The animation is detailed, gory, and impossible to not remember. 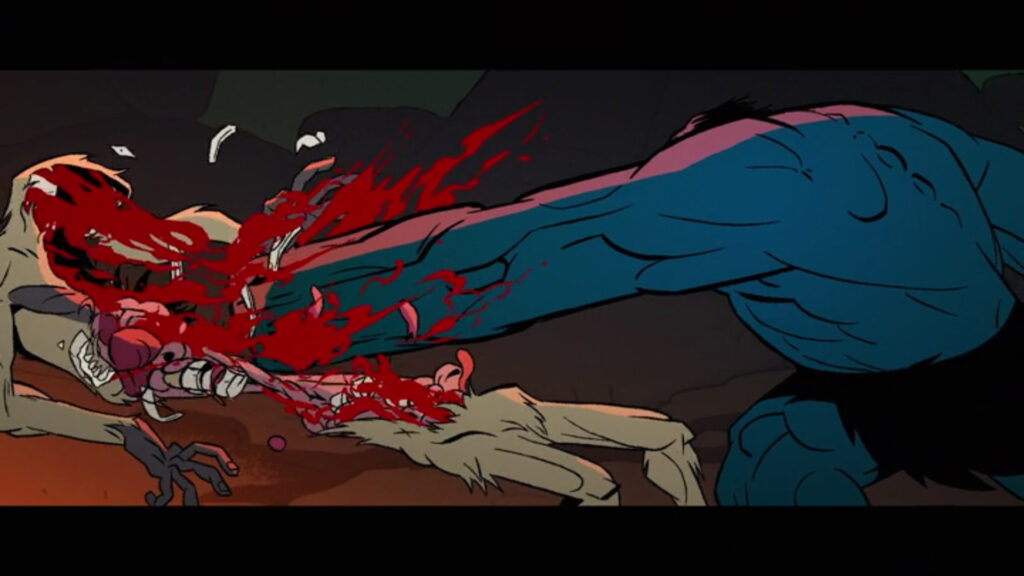 The second episode I wanted to talk about was episode seven, Plague of Madness. I'll say two words, Zombie Dinosaurs. When an Argentinosaurus is bitten by an infected Parasaurolophus, it pretty much becomes the rage zombie from 28 Days Later. However, instead of trying to infect others, it instead opts to annihilate the rest of the herd in a scene that is honestly a little hard to watch. When Spear and Fang come across the carnage, they run because they are damned terrified of this thing. What follows is a mad dash and an attempt to evade this monster. It's an excellent episode and one you won't forget.

Much as I want it to be, I doubt Primal will be some runaway hit. I feel that the people who watch it will love it as much as I have, but it won't have mainstream appeal. Genndy Tartakovsky made a show that is both ugly yet beautiful, both savage and peaceful. Primal will probably fly under many people's radars because it's animated and on Adult Swim, but honestly, it deserves more recognition than it's getting. Thankfully, Primal doesn't end on a cliffhanger the way many great shows have because the show has been renewed for a second season, and I am eagerly excited to see what Tartakovsky shows us with another 10 episodes in his world.

5 out of 5 stars. A true classic that should be seen to be believed.