Give the Man a Ship - Picard Episode Two Review 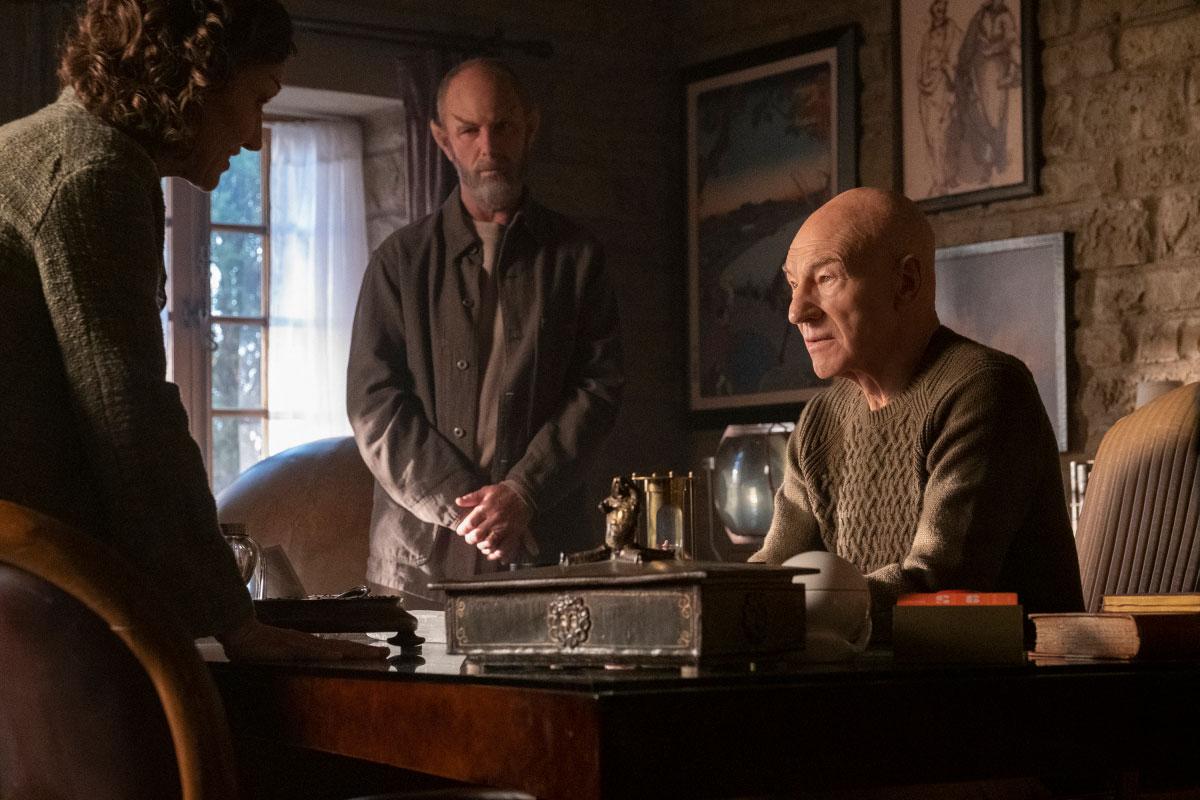 With such a strong opening episode, I guess taking a slight step in the wrong direction with Picard’s second installment should have been expected. Every season of television has an episode or two that just doesn’t click. My hope for “Maps and Legends” was that it would further the story along a bit more swiftly, but instead, we were given a hefty amount of exposition that didn’t seem necessary.

“Maps and Legends” picks up pretty much where we left off in “Remembrance.” Jean-Luc is researching Dahj’s death with Laris, Narek is “infiltrating” Soji by sleeping with her, and things aren’t what they seem within Starfleet. And after the big reveal that the Romulan Reclamation site is a decommissioned Borg Cube, Picard spends a fair amount of this episode showing us just what the Romulans, and Soji, are doing on that cube.

Right out of the gate, I wasn’t thrilled with the opening five minutes of “Maps and Legends,” which shows us the attack on Mars by rogue synthetics in more detail. For an episode that already seemed on the short side, this seemed unnecessary in so many ways, especially if you’ve watched the “Children of Mars” Short Trek and got most of what you needed to know from the premiere episode.

On its own, and had there not been so much exposition in the premiere, the scene works. It’s emotional, it’s disturbing, and does set up the twist that it seems like the synthetics were hacked and did not simply go rogue or rebel like the Cylons do in Battlestar Galactica. Unfortunately, the opening takes away precious moments from our main cast that could have been used to move the story along.

Here is a hot take though: who hacked the synthetics? Was it the Zhat Vash like we’re led to believe? Or was it Starfleet? We already know now from this episode that Starfleet is compromised. The Mars situation ended up being exactly the tragedy the Federation, and Starfleet needed to get out of helping the Romulans.

“Maps and Legends” does have a good opener had the episode started with Jean-Luc, Zhaban, and Laris, who is quickly becoming my favorite character on the show, researching Dahj’s death. We know from the Picard: Countdown comic that Laris and Zhaban are former Tal Shiar, and the fact that they get to turn this on for a good seven minutes or so is really cool. Yes, these are two people who are family to Picard, but they are also former spies, and that is very evident in this scene.

Learning from Laris that there is a deeper layer to the Tal Shiar, in what is already a massive secret society, was a nice twist. It immediately reminded me of the layers of the group Daniel Craig’s James Bond is tracking down in the most recent films. It certainly seems that Laris has some kind of family connection to the Zhat Vash, and it’s all but confirmed that the group has infiltrated Starfleet in a fairly large way.

Sticking with Laris for another moment. There was a beat here that I absolutely loved. When she and Jean-Luc are doing their Dixon Hill thing in Dahj’s apartment, she’s in full Tal Shiar mode. However, the minute Jean-Luc comes up with his plan to get a ship and find Soji and Maddox, she immediately becomes a worried friend for someone she cares deeply for.

Orla Brady or our “Irish Romulan” as our friends over at the Star Trek Discovery Pod like to call her, has been brilliant over these past two episodes. I’m truly hoping both Laris and Zhaban don’t go by the wayside when the show finally heads to space.

Meanwhile, on the Borg Cube, Narek has gotten close enough to Soji that they’re sleeping together. We know that Narek has some plan to activate Soji and her memories, and getting emotionally connected to her, at least for now, seems to be the way he’s going about doing that. Narek is a unique villain in the sense that you know he’s a villain, he acts like a villain, but he also has this calm demeanor about him, which makes him even more mysterious. I wasn’t sure if I was going to like the character at first, but he has immediately grown on me.

Getting to spend some more time on the Cube was fascinating. The fact that the Romulans are reclaiming these Borg, taking them apart, and apparently exploiting the tech for profit, sets up a unique look at just what has become of the Romulan Empire since the supernova.

Of course, having a Borg Cube that has been separated from the Collective sets up more questions than answers. What happened to the Borg? What exactly is Soji’s role in this surgical theater? Initially, I thought these scenes took away from moving the story forward, but the more I think about it, I like the fact that I have these questions.

Back on Earth, Jean-Luc is visited by his Doctor and former shipmate aboard the Stargazer, who lets him know he has a terminal disease. For whatever reason, the show decides to dance around the fact that in all likelihood, Picard has Irumodic Syndrome, something that was foreshadowed in The Next Generation finale, "All Good Things." Just go ahead and say it. Without that, there doesn’t seem to be as big of a sense of urgency.

Picard’s long-awaited arrival at Starfleet Command brings some of my favorite moments from the episode, while also showcasing a scene that seemed completely out of place. Jean-Luc’s immediate arrival in San Fransisco is the type of fan service all series should strive for. The all too familiar notes of the TNG theme playing, the holographic OG Enterprise and Enterprise-D in Starfleet command. Even the uniforms and comm badges somewhat mirror what was shown in “All Good Things.” The icing on the cake is Jean-Luc’s death glare at the desk clerk, having the gall to ask him his name.

Unfortunately, this is also where I find my biggest gripe with the episode. Picard’s complete dressing down by Admiral Clancy to me was completely unbelievable. Whatever may have happened 14 years ago and in one televised interview does not immediately erase decades of service to Starfleet and the Federation in which Picard and his crew saved the galaxy countless times, negotiated numerous peace treaties, and prevented the Borg from assimilating Earth not once, but twice. If this man comes asking for a ship, you give him a damn ship. It can be a piece of junk, but you give him what he asks for.

Even more unbelievable is the fact that Jean-Luc doesn’t have any allies left in Starfleet that he could have gone to instead of an Admiral he even admittedly says he rarely saw eye to eye with. Instead, he gets talked down to like a lowly ensign. And while it sets up an awesome rebuttal from Jean-Luc, the whole exchange left a sour taste in my mouth. My only other thought is that Admiral Clancy has also been compromised, bringing us to the awesome revelation of this episode.

Starfleet is compromised, and from the looks of it, that infiltrations runs deep. This is something I was really hoping would be a focal point of this new series, and it seems I got my wish. We meet Commodore Oh, a Vulcan who is sympathetic to the Zhat Vash cause, who is informed by Admiral Clancy about Picard’s weaseling around. From there, we also meet “Lt. Rizzo” who of course isn’t Lt. Rizzo at all, but Narissa, Narek’s sister and handler, deep undercover at Starfleet Command, and a member of the Zhat Vash.

The minute Narissa, or Rizzo in this case, walks in the room, you just get that, ‘okay, she’s bad’ vibe and I can’t get enough of it. With Starfleet being this deeply compromised, it will certainly be interesting to find out just how long the Romulans have been plotting against them. Does it go all the way back to when Picard was still in uniform? Lastly, I want to know if Commodore Oh is actually a Vulcan, or also a Romulan under deep cover. All questions I love that Star Trek: Picard is making me ask.

To conclude, I wish this episode hadn’t ended as abruptly as it did. How the episode went to the “next time on” screen, it seemed as if another scene was planned before the credits rolled. We only get to meet Raffi, Picard’s former first officer when he was an Admiral, for a minute, although I already love the dynamic between her and Picard. It just felt like the episode may have gone over budget and over time. Jean-Luc’s sit down with Dr. Jurati (Alison Pill) maybe could have been cut down, but it also served up some valuable information about Dahj.

While the scene with Narissa and Narek was very good, revealing that the Zhat Vash are trying to find the rest of Maddox’s synthetics, it’s an awkward way to end because I want to get there. Two episodes of exposition are more than enough. It’s time to get Picard out among the stars again, give our villains some bad guy things to do.