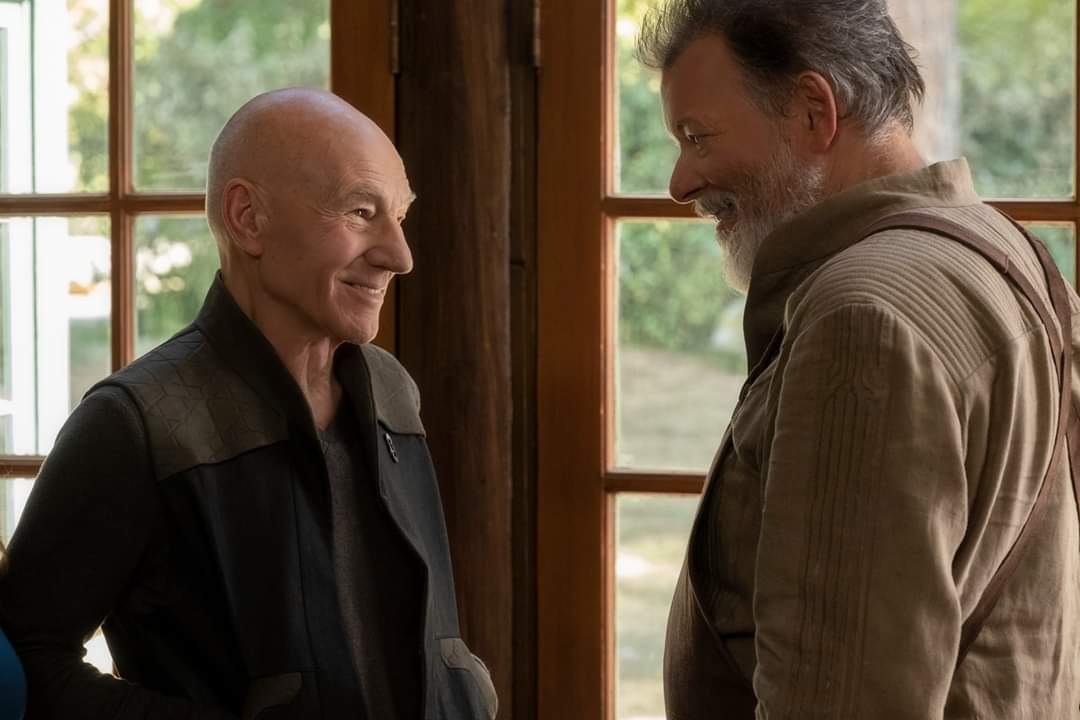 If you could say one thing about Star Trek: Picard, it's that the show has been a tale of two different seasons. While the first five episodes spent entirely too long getting things going, the back half of the season, going into episode eight next week, has served up the show's best events so far. Funny enough, "Nepenthe" is more of a pitstop episode. However, unlike several episodes of the show, it still helps move the plot along, while also giving us some heart-melting character moments.

In need of refuge after escaping the Borg Cube, Picard brings Soji to the planet Nepenthe, where Will Riker and Deanne Troi have made their home with their daughter, Kestra. Meanwhile, on the Artifact, Narissa has found Hugh and Elnor and is very much becoming the villain this show desperately needed. Finally, Rios and crew are being tracked through space by Narek, as the captain for hire begins to question who he can trust.

Once again, "Nepenthe" opens with a flashback, but this time, it's of events we've already seen. Except now we get more of the picture (do we though?), as Commodore Oh pays a visit to Dr. Jurati. While her Rite Aid shades still don't make any sense, the show finally gives us some insight as to what motivated Agnus to be a spy.

The Commodore mind-melds with Jurati and shows her some horrible events, which immediately make Agnus throw up. From what we know of Vulcans and their culture and logic, they can't lie. So, either the Commodore has already witnessed these events, or genuinely believes they are going to happen because of synthetics, leading Jurati, to make a straightforward decision, at least initially.

It adds another layer to her character, as it seems like she's less spy and more someone who believes in everything she just saw, even if those visions come from a less than reliable source.

Of course, Agnus spends most of this episode questioning everything she has done and is perfectly executed and acted by Allison Pill. She clearly hates what she has done and become, and that's very evident when faced with her mortality as the La Sirena attempts to break free from the Borg Cube. At her core, Jurati is just an innocent bystander who has never been off-world until now and just wants to go home.

Instead, she's played people like Rios and Picard, and killed Bruce Maddox, who she was romantic with. It comes as no surprise later in the episode, when she decides to attempt to right her wrongs. Whether her intent was suicide or just kill the tracker inside her, she knew she had done wrong, and Rios did a great job playing to her emotions, basically trapping her into the decision by accusing Raffi of being the spy. The whole trio aboard the ship probably had its best arc to date because of this. Auntie Raffi, am I right?

And I'm just putting this out there. I may not dig the character that much, but Raffi and I share the same reflex to seeing, smelling, and hearing vomit. Girl, I'm right there with you. So much throw up in this episode.

Back aboard the Artifact, this entire arc of the series continues to be the weak point of Picard. Episode six ended with Elnor and Hugh about to take down some Romulans, but when "Nepenthe" opens, Hugh is being interrogated, and Elnor is nowhere to be seen. I was literally asking my wife, "Where is Elnor?" Even Jurati back on the ship was like, "What about Elnor?" And then, poof! There's Elnor!

I understand the need to create a plot point and having a conflict with Narissa and Hugh, but Elnor awkwardly not being captured with him seems like a significant error and/or mistake. That all being said, There were some moments here that I really connected with. Elnor staying on the cube, for example. It seems like a lost cause, right?

Despite being sworn to Picard's cause, the situation between Hugh and the Zhat Vash seems much more dire, and as a Qowat Milat, this is, at least to him, where he is immediately needed. Later, of course, we see that he may be in way over his head.

Then there's Narissa, who is absolutely becoming the villain that this show has desperately needed. She is ruthless, cunning, and has this commanding presence that is almost the exact opposite of her brother Narek. Even when she's clearly pissed off at Hugh for ruining years of her operation, she remains calm, cool, and collected, and I absolutely love that in a villain. In fact, she's probably one of my favorite characters on the show right now. Her showdown with Elnor was epic. Seriously though, did she have to kill Hugh?

"This is not how Zhat Vash fights Qowat Milat. If that's what you are." - Narissa to Elnor (translated from Romulan)

I decided to save the best for last once again, as Jean-Luc's reunion with Will and Deana gave me all the feels. Before we even get to see them, we're introduced to their daughter Kestra, who is absolutely everything in this episode! Played by Lulu Wilson, Kestra came close to being my favorite part of "Nepenthe." Immediately, she is just curious about everything, and like the best curious children, not afraid to ask or say anything. Indeed a "wild girl of the woods" like her dad calls her.

Kestra is also the one person in "Nepenthe" who isn't afraid to speak plainly to Soji. Of course she isn't, because she's just a kid! But this becomes so important to Soji because of her fear and insecurities after what Narek did to her. Kestra becomes the one person that she can talk to and feel safe around, and I loved each scene they shared.

And while Soji's apprehension and lack of trust towards Picard seemed a little forced at times, it also makes perfect sense. She was literally just manipulated, both sexually and mentally by Narek, so believing that Picard was just another game or manipulation from her former abuser isn't far fetched. Whether it was just an acting choice or a spell of bad writing, it didn't play off right coming from her.

On to happier things, though, that first look Deana gives Jean-Luc when he is walking up to the house. As a lifelong Trek fan, I almost started crying, probably for the same reason Deana was. And then Will's reaction when he goes, "Awww, man!" It's just such a beautiful moment, and I especially liked how Frakes was able to go from loving friend to commander with the flick of a switch when he realized Jean-Luc was in trouble.

Jonathan Frakes has gone on record saying he had anxiety coming back to acting for this role because he hadn't performed in so long, but wow, you would never know. Both he and Marina Sirtis coming back into these roles, it was as if they never stopped playing them, even with this natural, organic progression from Starfleet officers to homebodies. Of course, living on this beautiful planet in this beautiful home is built on a bit of tragedy.

I'm torn about whether I like that yet another person from Jean-Luc's past, especially Riker and Troi have gone through trauma with the loss of their son, Thaddeus. On the one hand, can't someone in this continuation just have some happiness? On the other, they do seem happy, and having Thaddeus die of a disease that was silicone-based and usually curable, hits home just how much of an effect the ban on synthetics has had on the galaxy.

I also thought it was a bit strange that more Enterprise crew weren't in Starfleet anymore, but the more the episode played out, the more I realized that this was just more natural progression. They lived that life on "starships" as Deanna put it, and Will stated he was still active reserve, so it certainly seems likes Starfleet, at least in some way, is still part of their lives. Picard even introduces Deanna to Soji as "Commander Deana Troi."

Will and Deanna living in this cabin just felt right, though. Riker was still Riker, but as the family man he always wanted to be, making brick oven pizza and raising an awesome, smart daughter. Deanna having a garden and using tomatoes as psychoanalysis with Soji feels like the perfect next step for her character, even though she's very much still grieving, even many years removed, the death of her son.

Of course, Riker is still Riker, and the scene where he's cooking pizza while Jean-Luc judges his wine selection is brilliant, with Will flicking on the "Number One" switch, and figuring out everything Picard is up to, including the fact that not only is Soji an android, she has Data's "DNA" in there, and didn't miss the "Data head tilt." I'll say it once again, it's like he never stopped playing Will Riker. How about the A+ Will Riker smile he gives Kestra after she secretly texts her captain friend?

Same again can be said for Marina Sirtis, who flips the Counselor Troi switch much the same way when she chews Jean-Luc out in the garden for not understanding what Soji is going through. It was full-on, Picard in his ready room, and Deana following him in to call him out on his bullshit, and it was awesome.

Picard being among his friends and former crewmates does something else for the show and the titular character. For the first time, we really see him become the captain once again, from the tone of his voice to his conversation and calm demeanor at the dinner table. This was an absolute delight to see.

Finally, the moment Will and Jean-Luc share as they walk the property, talk about his new crew and eventually sit together by the lake. I think I'll be correct in assuming there wasn't a dry eye in any living room after watching this. It may have taken a while for it to blossom on The Next Generation, but most of their time together through the years transcended the typical Captain/First Officer dynamic. They truly were and are family.

"Believe me, I know better. That my friend, was always a losing proposition." - Will Riker to Jean-Luc

With Soji and Picard back on board La Sirena with Rios and Raffi, Picard is inching closer and closer to its climax. It certainly looks like we're going to get some more information about the events we saw in Commodore Oh's mindmeld. Then there's Elnor trapped on the Cube, and Seven of Nine coming to his rescue, and it doesn't look like things are going to end well for our favorite Borg. Will we see Narek swear some more in Romulan, or will he find a way to pick the trail back up? Who's on Soji's homeworld? As always, keep those hailing frequencies open. Until next week!