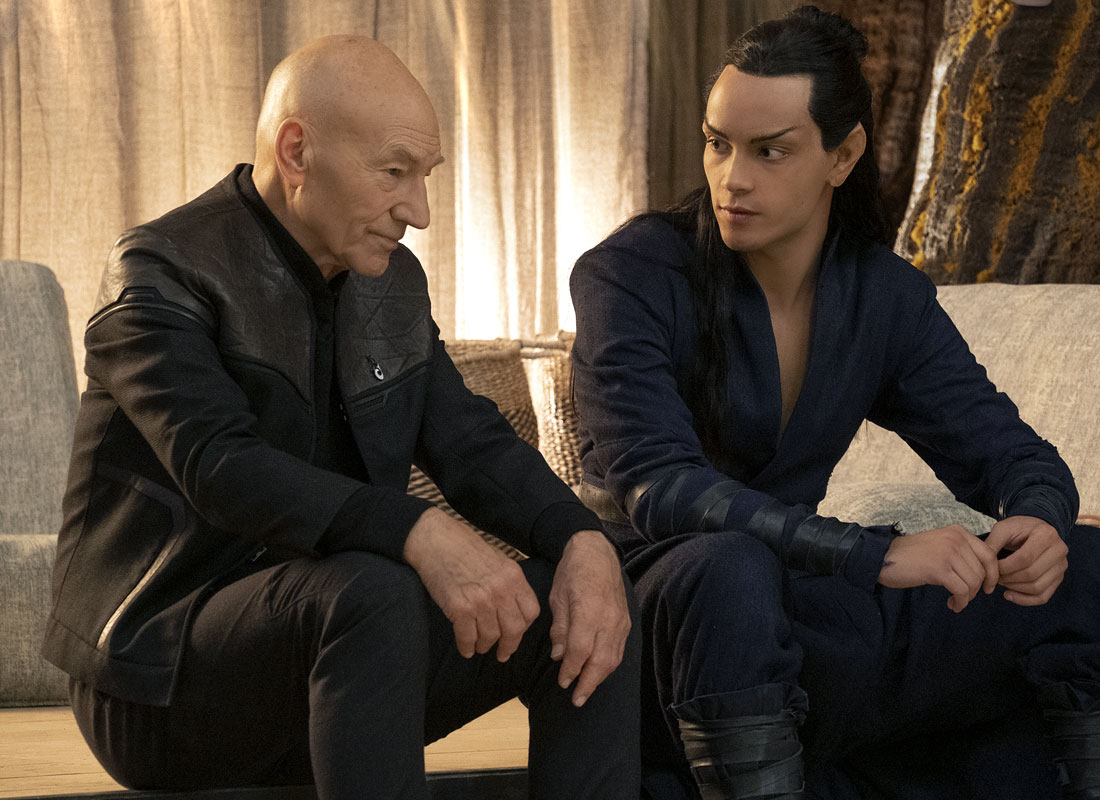 Once upon a time, our favorite resident pain in the ass Q said to Captain Picard, “You’d like me to connect the dots for you, lead you from A to B to C so that your puny mind could comprehend? How boring.” How right Q would end up being. The name of the fourth episode of Star Trek: Picard is “Absolute Candor,” so let’s just say it plainly. Picard has done nothing in its first four episodes.

This isn’t a knock on the quality of the show; Star Trek: Picard is good. The worry here is that in four episodes of a ten-episode series, the show has barely moved forward, and that is what has me at a relatively high yellow alert. If we’re talking about a 12, 15, even 20 episode season, perhaps this is a different conversation. “Absolute Candor” is a fine episode, and has some cool moments, but once again, there is a frustration at the lack of moving forward.

Episode four opens with yet another flashback. ‘Another flashback you say?!’ Yes reader, another flashback. But it was good! Seeing Picard working with the Romulans, specifically a sect of Romulan murder nuns called the Qowat Milat, was a touching moment. These flashbacks of Jean-Luc trying so hard to fulfill the Romulan relocation, as well as his father/son type dynamic with Elnor? I was really on board.

In fact, Picard having feelings for, let alone any kind of interaction with a child is such a deep dive into his overall character development all the way back to TNG. Family is something he has always struggled with, and after his brother and nephew burned to death in a fire, it’s quite clear from Star Trek: Generations on, Jean-Luc has regrets about never starting a family, as he always put Starfleet first.

Back to the flashback, they serve an important purpose, telling us everything that led to the Romulans being distrustful of the Federation again (I guess they never actually ever trusted them), and Picard’s ultimate downfall, but if we’re going to continue with them, the show needs to cut some of the filler to help move this thing along. I’m looking at you awkward Borg electric slide scene.

I also really enjoyed the opening of “Absolute Candor” (if we’re considering the flashbacks as a prologue of sorts). Allison Pill’s Dr. Jurati bugging Rios about his book was simple and fun dialogue, as well as some much-needed character development from people not named Picard or Raffi.

Can we also talk about Rios’ abundance of holograms? Wil Wheaton pointed out on the post-show, The Ready Room, that Santiago Cabrera is channeling his inner Tatiana Maslany from Orphan Black. It comes as no surprise that Cabrera is both familiar with the show and a fan.

The way he is portraying all these different “emergency” holograms is so much fun to watch. “Absolute Candor” introduced my favorite yet, Rios’ emergency tactical officer, who speaks Spanish and seems drunk or hungover at the controls. Can he still shoot phasers? Yes, and he got the job done.

Sticking with our supporting characters, Raffi’s sass with Picard is hilarious. While her dialogue in Episode 3 left a lot to be desired, Raffi’s banter with her former Captain shows a long-standing relationship and someone who has been through the same song and dance with him in Starfleet. There is certainly a friendship, albeit a bit bruised, between the two, but it’s clear that she’s seen this type of behavior from Jean-Luc many times before.

They share a great moment after everyone else leaves his study, and it was very much a first officer voicing concern and reason to her Captain, as I’m sure happened a lot during the Romulan relocation effort. When she reminds him of their old saying, “One impossible thing at a time,” we get to see just a little bit more of their familiarness with each other and hinting more that these two were close. Not romantic, but close.

Back on the Borg Cube, this is where Picard is truly at its worst right now. Soji and Narek were interesting, at least to begin with, but have become boring and flat. For one, did we really need two scenes of Soji studying Rhamda and trying to figure out who she is? This easily could have been one scene, but instead, we get her watching the holos, then staring at some technobabble from her implants that gave the viewer nothing. Also, did they really put a bar in a Borg cube with some string lights? Really?

Knowing that the always amazing Jonathan Frakes directed this episode makes this next scene even more cringeworthy, as I’m sure he was closing his eyes along with us. An electric slide, dance scene, followed by making out on a Borg cube. I mean, there are so many different ways Narek could have planted that seed of doubt in Soji. It just felt so out of place, even in this new, modern era of Trek.

Meanwhile, you have this amazing character in Narissa, Narek’s sister, who is so much more fascinating and mysterious. The sheer brutality of almost choking him out for being slow with his mission, yet how she remains calm has me itching for more, and the moment that is sure to come when she takes over the task of activating Soji can't come soon enough.

"I allowed perfect to be come the enemy of the good." - Jean-Luc Picard

Back on Vashti, Jean-Luc is attempting to get Elnor to bind himself to his cause as his qalankhkai, but Elnor has deep-rooted abandonment issues after Jean-Luc failed to return to Vashti following the attack on Mars. There are some great character moments here not just between Elnor and Jean-Luc, but also with Zani, one of the warriors who helped raise the orphaned Elnor, and has an almost Guinan like relationship with Jean-Luc.

Unlike the many other Romulans on Vashti, Zani, played by Amirah Vann, accepts that Picard did the best he could with what he was given, save for the lack of any form of communication after his dismissal from Starfleet. “Absolute Candor” left me wondering if Jean-Luc ever considered taking Elnor with him. Much like the rest of the Romulan people, and even Raffi, Elnor is left instead feeling abandoned by Picard.

So for the Romulans on Vashti, and to an extreme extent the Tal Shiar, they have a pretty convincing case to be pissed at the former Admiral who ended up making some major empty promises at least through their eyes. Obviously, they don’t know the whole story, but for Jean-Luc to then come into their establishment, damage their sign, and act like he owns the place seemed so out of character, it really took me out of the episode.

Yes, Picard’s actions lead to Elnor binding himself to the cause, and the killing of a former Romulan Senator to boot, who did have a legit beef with the Admiral, but there had to be another way to get us there. You can try and say, 'well Jean-Luc is responsible for there being a colony there in the first place,' but his actions still don't fit.

I will give a point back because we get to see Picard fence again, for like a second.

Luckily, Jonathan Frakes’ masterful directing brought me right back into the episode for the climax, and a true Jean-Luc Picard moment. Immediately upon beaming back aboard La Sirena, Picard gives Elnor an old-fashioned chewing out like we saw many a time in the close confines of the Enterprise-D ready room. It’s one of the few times that the show has shown glimpses of the man Picard used to be, and it was refreshing.

This also comes to play when the ship is under attack and Jean-Luc instinctively starts giving orders. Luckily Rios seems to have a strong respect for the former Enterprise Captain, and lets Jean-Luc have his moments, leading to the big surprise of the episode following the battle with the warbird.

Yes, Seven of Nine has returned! That’s it though. She literally beams aboard, tells Picard he owes her a ship and passes out. From what Santiago Cabrera has said, it seems Seven is here for the long haul though, so that’s exciting.

With six episodes left to go, Picard needs a big fifth episode to get going. At least by the end of “Absolute Candor,” it seems we may finally be getting there with the addition of Seven of Nine. Next week’s episode judging solely off the preview looks like it will have a good mix of comedy and action, and Seven shooting something. My intrigue is still there, but it also has shore leave on the mind.