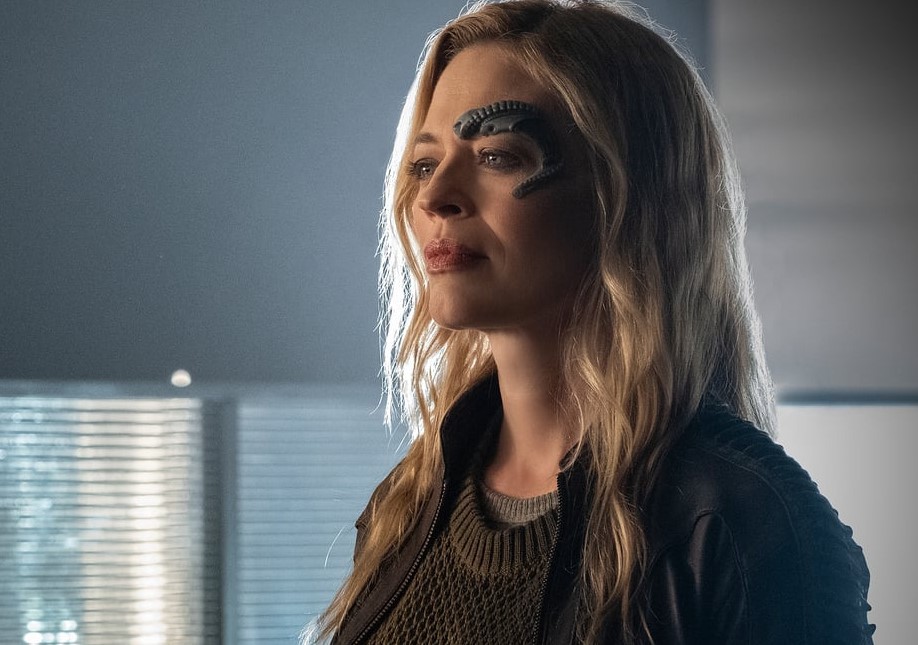 "Somebody out here oughta have a little hope."

Last week, I said that Picard needed to have a big fifth episode to really keep the show from moving into the dreaded realm of, 'we can wait to watch the next episode.' Luckily, "Stardust City Rag" delivered and then some, opening with a gut-wrenching scene that immediately pulls you into the episode, brilliantly written by Kirsten Beyer and directed by Jonathan Frakes.

In what has become the norm of the series, this week's episode of Picard does open with a flashback. This time we're focused on Seven of Nine (Jeri Ryan), who makes her triumphant return to Star Trek, albeit in a very different position than as we last saw her on the Voyager finale.

One year after the Romulan relocation effort is brought to a halt by Starfleet, Seven has joined a group of freedom fighters called the Fenris Rangers. "Stardust" City Rag" opens with Seven attempting to rescue a very familiar face from her time aboard Voyager. Young Icheb, now a Starfleet lieutenant, has been captured by black market scavengers who are kidnapping ex-Borg and harvesting them for parts. Seven is too late though and is forced to mercy kill someone who was the closest thing she had to a son.

Anyone familiar with Voyager has to know who that is on that table the moment you see his facial features and then obviously his Borg eye being extracted. That's what makes this episode pull you right in. There are high stakes, and we've just seen a pretty significant character die ruthlessly. In fact, I'll go as far as to say Seven having to kill Icheb is one of the most powerful moments in all of Trek's history. It helps flesh out the world Picard takes place in now: No neutral zone and no Federation jurisdiction or interference.

"Stardust City Rags" also finally re-introduces us to Bruce Maddox, the former Starfleet scientist who once wanted to tear down data in an attempt to study him and create more androids. It seems like after the synthetic ban, Maddox was forced to leave Starfleet and continue his work by other means, which appears to have led him to the black market and taking loans from our baddie of the week, Bjayzl. We also learn later, is directly responsible for Icheb's death, and betraying Seven and her Fenris Rangers.

To say Bruce had it rough in this episode would be an understatement. First, he's poisoned, then is going to be sold to the Tal Shiar who want see him die a horrible death for his work on synthetics, is then instead fake sold to the Picard Gang, reunited with his Aggie (Dr. Jurati), only to have her turn on him and kill him.

Yes, that's right. The Jurati is a spy theory, whether willingly or via brainwashing, has come to light. I'm glad they didn't sit on this too long. Picard now has four more episodes to really explore that instead of some last-second deep fake late in the season. Perhaps those sketchy Vulcan shades Commodore Oh was wearing are some form of Section 31 brainwashing device? Jurati having these added layers makes me like the character even more, even if her turn was foreshadowed and a tad obvious.

"Every damn day of my life." - Picard and Seven, "Stardust City Rags"

Let's talk about the remarkable chemistry between Jeri Ryan and Sir Patrick. From their scene in his Study where Seven downs a bourbon and calls him out on his righteousness, to Picard turning the tables in the bar on Freecloud, lecturing her on the merits of revenge and murder. The mutual respect they have for each other by the end of the episode, talking about their experience as part of their Borg Collective and gaining back their humanity. It was a beautiful scene played out by two people that acted as if they shared the screen for years rather than days.

My personal take on if Picard knew what Seven was going to do to Bjayzl when she beamed back down? I think he knew. I wouldn't say he was okay with it, but also knew that he couldn't stop her and ultimately let it go. Picard has had his run-ins with revenge and is no stranger to it. What Bjayzl (could they have not picked a better name?) did to former Borg like Icheb was disgusting, and probably hit a sore spot for Picard, having been assimilated himself.

Jeri Ryan and Seven truly get their time to shine in Picard's fifth episode. As we mentioned, her scenes with Jean-Luc are some of the best moments of the show. And though I would have liked even more backstory, we learn that she embraced her human name, Anika, for a time, something she struggled with often on Voyager. This ended upon Bjayzl's betrayal and the death of Icheb.

There was also a great moment where Picard is pretending to verbally abuse her for being a former Borg and calling her all sorts of horrible things to convince Vuc that he's legit, and she gives him this death stare that was all too familiar.

"Seven, the ex-Borg Fenris Ranger from the Delta Quadrant. And I somehow managed to forget Picard was Borg too, must've happily blocked it out." - Captain Rios

Speaking of fun moments, Rios and Raffi talking about Seven and Picard being ex-Borg, and just in awe of everything they've been through was a nice touch. I wouldn't go as far as to say it's hero-worship, but an equal mix of respect, admiration, and just a little bit of fear. Also, Rios' orange pimp hat in this episode is life. Picard as a French Pirate? A close second.

Unfortunately, Raffi's angle this week was the one sore spot in an otherwise fantastic episode. While "Stardust City Rags" thankfully gave us a break from Soji and the Borg Cube this week, it seems like the writers decided that the episode still needed filler, and POP! Raffi has a son. Everything about this scene was off. The fact that there was a fertility clinic, a legit-looking one at that, on a Vegas type planet. And the fact that Raffi had a son at all? I could go on. Unfortunately, Raffi remains Picard's weakest link. Now that this little detour is out of the way, maybe that will change.

Even with "Stardust City Rags" is a pretty linear episode, it did take the time to give us some fun easter eggs and character introductions like the Reptilian Mr. Vup. He may not have had a ton to do, but when the big guy was in a scene, he stole it. Rios had smoked meat for breakfast? Vup knew, and he wanted some. Our big reptilian friend also had the honor of namedropping everyone's favorite DS9 barkeep and resident Ferengi, Quark!

With that, we move into the back half of the first season of Picard, and "Stardust City Rags" certainly moves things right along as we head into episode six. Picard gets his answer from Maddox before his untimely death at the hands of Dr. Jurati. Dahj did have a sister, Soji, and she is aboard the Borg cube. Even more, there is a giant Tal Shiar/Federation conspiracy that the show has been building towards, and is sure to spill over sooner rather than later.

Questions for next week. Was Agnus in control of her actions? Is she being brainwashed? Will we see Seven again? How will Picard and his ragtag crew infiltrate a Borg cube? We'll find out next week. Keep those hailing frequencies open.