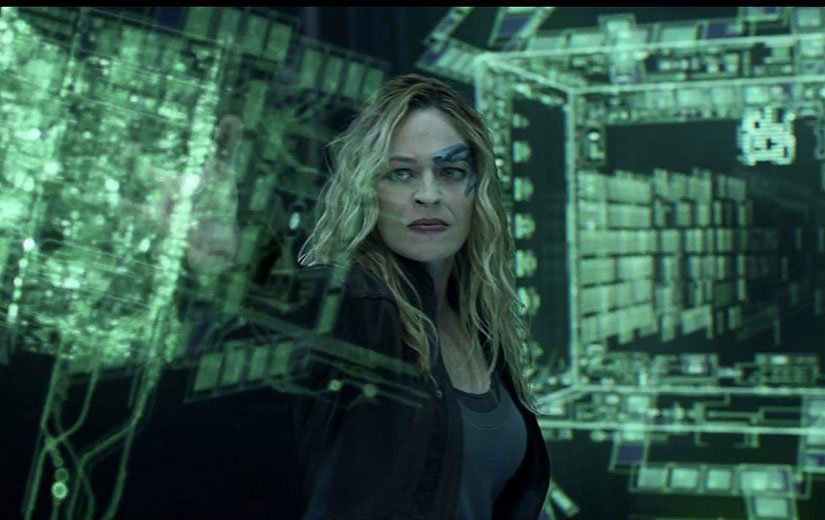 It already seems like ages ago where there was a worry that Picard may not have been the strong show we hoped it would be. Since the midway point, Michael Chabon and crew have churned out great episode after great episode. "Broken Pieces" is no different, and that episode title is almost too perfect for Picard's eighth installment.

While "Broken Pieces" certainly starts with pieces of the puzzles scattered across the floor, by the time the end credits hit, those pieces are that much closer to coming together.

"Broken Pieces" sees Elnor still trapped on the Borg Cube, outnumbered and outgunned, until Seven of Nine comes to his rescue. Back aboard La Sirena, Rios struggles with the return of Picard, with the sight of Soji awakening some dark memories in the Captain. With Rios' sudden isolation, Raffi attempts to put the pieces of the puzzle together that not only connect her friend to Soji but the Romulan's plot to destroy all synthetic life.

As we've come to expect week in and week out, "Broken Pieces" opens with a flashback, with Commodore Oh on a mysterious planet, and the reveal that she is a high ranking Zhat Vash member. Narissa is there as well, along with another familiar face, Ramdha from the Artifact, who happens to be her aunt.

On this planet is a glowing green ring, which is apparently called the admonition? It shows the Zhat Vash the devastation synthetic life caused 200 or so thousand years ago. Some of the Zhat Vash kill themselves, while Narissa and Ramdha are left haunted, but standing, ready to help Oh on her crusade.

It comes as no surprise that Narissa is the strongest among the Zhat Vash. As we witness later, she is a cold (and green) blooded killer and makes an excellent villain. Even with what the Zhat Vash believes, that they are making their world a better place, Oh and Narissa have committed multiple atrocities, and have next to no redeemable qualities.

I was also relieved to finally find out that Oh is half Romulan and half Vulcan. I do wish that we had this reveal a few episodes ago, perhaps when she mind-melded with Jurati. But it's good to have the information we know now; that she infiltrated Starfleet posing a full-blooded Vulcan, but is also able to deceive Starfleet because of her Romulan side.

On the Borg cube, we see Seven of Nine make her return and rescue Elnor, who was in a fight that was starting to look un-winnable. To put it mildly, the Artifact/Cube/exBs arc has been both a blessing and a curse for the series. On one hand, it gives us some really cool moments. On the other, it almost seems like one massive plot device, where characters go to die for no good reason. I don't really know how else to put it. The Artifact could have literally been anything else, and still moved the pot along.

But like I said, there were some really cool moments between Seven, Elnor, and Narissa's attempt to basically quell a rebellion. For example, Elnor taking a flash-bang basically right to the face, and still holding his own was a pure bad-ass moment. Seven reawakening the Cube and activating its regenerative abilities, then seeing the nanites start to rebuild. If you have any knowledge of the Borg, and how scary and lethal they can be, this was a cool moment for you and any Trek fan.

It was also…I wouldn't call it fun, but refreshing to see Seven's more "Borg" side. Less emotion, more matter of fact like when we saw her on Voyager. Of course, that all changes when she is forced to choose between capture or reactivating a local Borg Collective by becoming the Queen of that specific Cube. When she talks about ExBs who may not want to be disconnected from the Collective for a second time and Seven's own reservations about possibly not wanting to let them go once she is the Queen, it's a gripping performance.

"They won't want to be released, and I...I might not want to release them." -Seven to Elnor

Jeri Ryan played these wide ranges of emotions so well, both as Anika and the Queen. When the Borg in stasis begin to activate, and she says as the Collective, "We are Borg." WOW! Only for them to then be sucked out into the cold vacuum of space. And that's where it gets all kinds of pointless.

Hugh gets name-dropped once, and at the end of the day, he only dies to reopen the door for Seven. Then, this really awesome moment of reawakening the Borg ends up being a giant letdown and virtually pointless when they get blown out into space. Good character moments and epic throwbacks? Yes. Good storytelling? Debatable. It'll be interesting to see how the Cube is utilized in these final two episodes now that Seven is in control with Elnor and the ExBs, but this wasn't executed all that well.

Santiago Cabrera (Rios) had a superb episode. While he didn't have a lot of dialogue as Rios, he did come out to play, as each one of his emergency holograms ended up in a room at the same time. Ranging from a life emergency hologram who reminded Raffi that she locked herself out of being able to replicate wine, to a throwback of our favorite Scottish miracle worker with the engineering holo.

It's needless to say, but much like Tatiana Maslany, who I've mentioned before, Cabrera deserves an Emmy or Golden Globe for being able to pull this off. As Rios himself, the nightmare of what happened aboard his old ship was acted through some fantastic body language for most of the episode. And when Raffi finally checks in on him, he's absolutely haunted by Jana, who was identical to Soji, and murdered in cold blood by Rios' father figure and Captain, Alonzo Vandermeer, someone we later find out was very well respected within Starfleet, and by Picard.

Of course, nothing is ever as it seems, and apparently, Starfleet would have murdered the whole crew (ordered by Commodore Oh) of the Ibn Majid had Vandermeer not killed Jana and her counterpart, who as we know, were both synths. And now we understand why Rios is so fucked up! He literally had to cover up the whole thing, including the suicide of his Captain, who could not live with his actions, only to then be dismissed from Starfleet. And Cabrera shines and excels at showing that pain and anguish in arguably his best episode.

As always, Patrick Stewart also turned it on in "Broken Pieces." Right from the get-go, when he ordered Rios to Deep Space 12 and demanded a subspace channel to Starfleet, he was in full "Captain Picard" mode. My one gripe with the episode was his initial hesitation in giving Agnus the benefit of the doubt when it came to having a tracker as well as killing Maddox. But when she finally woke up, and he came to realize the truth, it was a very different side of him, and had the reaction I thought he should have had when Raffi initially gave him the information.

"Admiral Picard, with all due respect, and at long last, shut the fuck up!" - Admiral Clancy to Picard

There does have to be sympathy for Jurati, as she was essentially mind raped by Commodore Oh, and says thinking of suicide is a comfort to her. So therein also lies more questions. Yes, she killed someone, but was she of her own faculties? Especially someone she loved? Should she turn herself in?

I'm not so sure, especially after she meets Soji for the first time and has this child-like fascination. It was a really beautiful moment, considering Oh ordered Jurati to kill her to. Agnus does make it clear that will never ever happen, and It's not hard to believe.

But that initial quasi interrogation from Picard to Agnus was incredibly well done, as Allison Pill continues to put on an acting masterclass.

Patrick Stewart also shared a beautiful scene with Isa Briones (Soji), who we unfortunately haven't gotten to talk about much. The two talk about Data, and if Picard loved him. Soji also asks Jean-Luc if he thought Data loved him, but also, what Data's lasting memory of Picard would have been had their places been switched. It's a powerful moment where Picard recounts all these things that as fans, we've come to love about Data.

But what ended up being the truly special moment was when Soji, with some deep planted memory, told Picard matter of factly that Data did, in fact, love him. Picard's answer is unspoken, but his reaction is written all over his face: joy, pride, sadness, even regret? Patrick Stewart hit it all with one look.

So who was the MVP of "Broken Pieces?" That award goes to none other than Raffi, who I've been hoping would finally be given her time to shine, and that she did. The minute Rios looks at Soji in horror, and Picard dismisses her claims about Agnus, Starfleet Intelligence Raffi takes over and gets the facts.

First, from the EMH about Agnus' actions, and then her quest for the truth about Rios. Each conversation with a different hologram is fun, and we get to see the side of Raffi that had to have impressed Picard enough to choose her as his First Officer years ago.

Michelle Hurd was able to show us that despite Raffi's unceremonious exit from Starfleet, she still has that training ingrained in her. It's not that Raffi is putting these pieces together because she has a hunch. She's doing it because she's smart, resourceful, and it's what she was trained to do. Not to mention that she's sober for the first time since we've seen her on the show.

Her confab in Picard's study near the end of the episode with all of Rios' holograms was great television. We get to see all of their personalities at once, and Raffi uses them to find out exactly who Jana was to Rios, and what happened aboard the Ibn Majid. You really need to watch the scene to understand.

And with that, we're at the penultimate episode of Picard, and it certainly looks like we'll be arriving at Soji's homeworld, thanks to a fancy Borg transwarp conduit. Who will we meet there? How will our band of misfits be welcomed? When will Narek reveal himself? What does a former Borg and a Romulan assassin do with a newly healed Borg Cube? I think it's about time we go to Yellow Alert. Keep those hailing frequencies open!