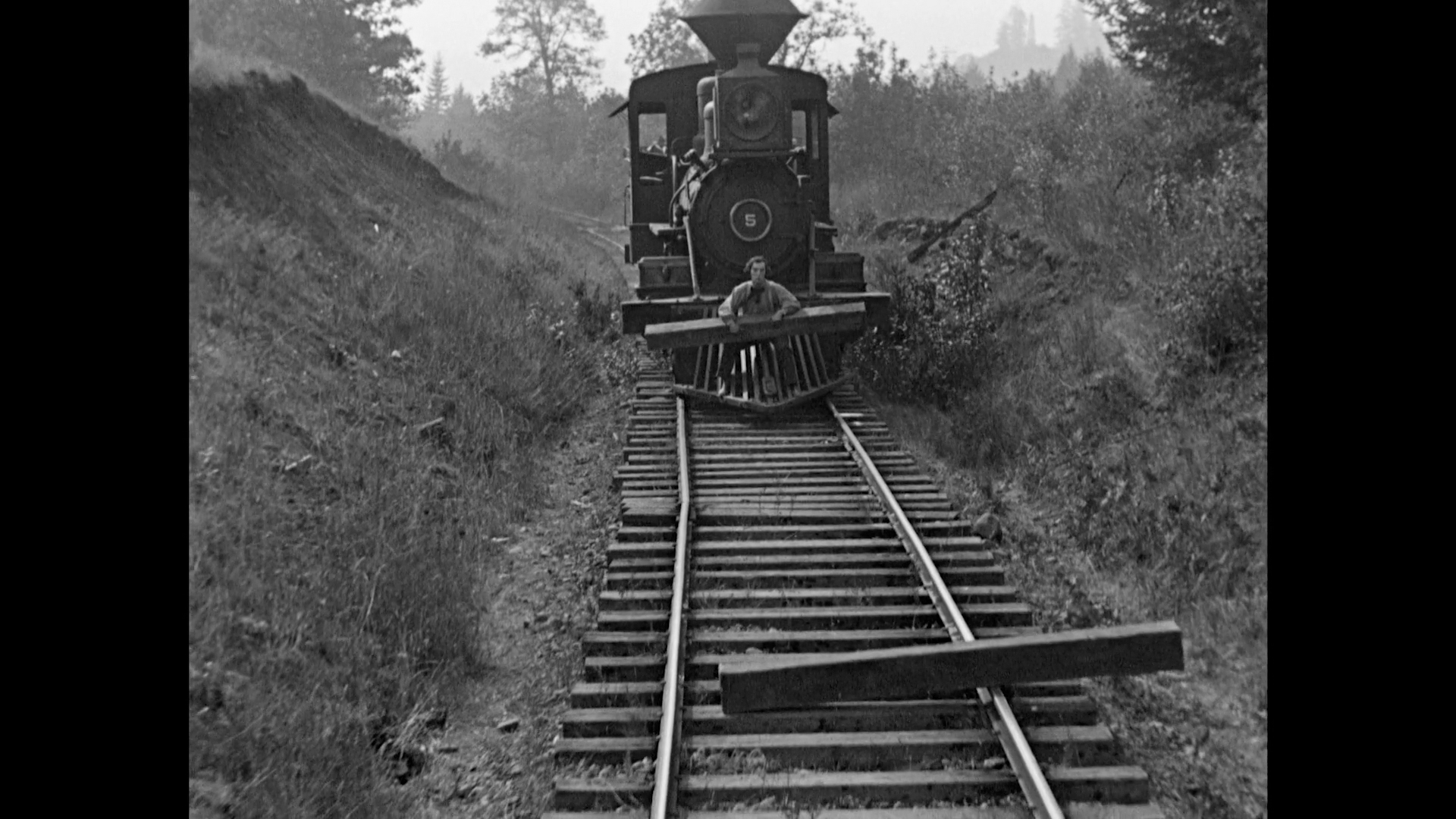 This one hurts guys.

I mentioned in my review of Wings that what started me down the trail of Old School October was seeing the video of Buster Keaton's greatest stunts. So in doing all this, I knew from the beginning that I was going to watch a Buster Keaton movie. But which one? I did some research, and it was between two films, Sherlock Jr. and the eventual winner and subject of today's discussion, The General, which is regarded as Keaton's masterpiece.

Before I start answering the three questions about the movie, I realized some people may or may not know who Buster Keaton is. So, who is Buster Keaton?

Born in 1895 to a vaudeville family, Keaton was already in show business by the time he was three. In 1920 he got his first starring role, and it started a period of filming movies for Keaton that lasted for pretty much the entire 1920s. Keaton was a force known for his comedic prowess and ability to have a deadpan expression in pretty much any situation. Many of Keaton's movies from this period are regarded as classics. Though his career didn't last long term into the "talkies" period of film, he enjoyed a resurgence in the 1950s with roles in films like, Around the World in 80 Days and It's a Mad, Mad, Mad, Mad World. He received an honorary Academy Award in 1960 and died of Lung Cancer in 1966 at the age of 70.

Keaton was a force unto himself for the 1920s, but I wanted to answer whether his supposed masterpiece was worth a watch? So let's get to The General.

The General starts off in April of 1861 in Marietta, Georgia. When news of the Confederacy's attack on Fort Sumter reaches the town, everyone knows that it will be war, and there is a rush to enlist in the Confederate Army for what will become the Civil War. During all of this, Johnnie Gray, played by Buster Keaton, is an engineer for the Western & Atlantic Railroad. He is very good at his job, taking great care of one of his greatest loves, the locomotive, The General. This is obviously where the movie gets its title.

Johnnie is also deeply infatuated with Annabelle Lee, played by Marion Mack, a woman he wants to marry. So when the war breaks out, Annabelle's father and brother say that they will enlist in the military. After both depart the house to do so, Annabelle goes over to Johnnie and asks if he's going to enlist as well because she is a terrible person.

No, I'm serious, guys. Annabelle watches as her father and brother go to enlist in the Army (because war is FUN!) and then pretty much all but demands that Johnnie should do so as well. Johnnie, never one to shirk away from fighting for slavery, runs to the recruiting office beating everyone else there to be at the front of the line. When he says his occupation is an engineer, the recruiting office head determines that he is too valuable to the South in his current job. Of course, they never tell Johnnie this, merely saying they can't use him, so the movie's entire plot is driven by the fact that rather than just TELLING Johnnie why he can't join the military for a legitimate reason. They instead decide to keep him in the dark.

Annabelle's father and brother see Johnnie after he dejectedly leaves the recruiting office and invites him to stand in line with them, but rather than telling them that he was rejected, Johnnie walks away without a word.

Of course, both men view Johnnie as a coward who is unwilling to defend the South and tell Annabelle this. When she asks Johnnie why he didn't join, and when he says they wouldn't take him, Annabelle believes he's lying and says that until he is in uniform to not talk to her again because she is a terrible person. A dejected Johnnie sits on the driving rod of the steam engine as it drives away. 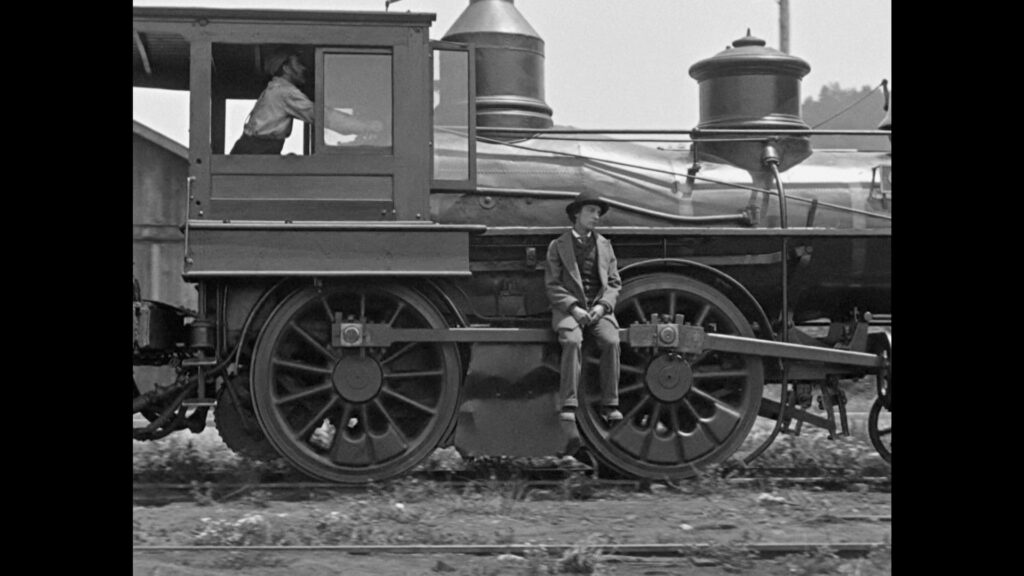 I want to take a moment to say that this stunt is entirely practical (as they all are in this movie), and I was impressed with how Buster Keaton kept his composure as the train drove away with him sitting on the outside of it.

A year later, in 1862, Johnnie is still working on The General, and by happenstance, Annabelle is on the train. Unbeknownst to anyone, however, the Union Army has enacted a plan to steal The General and drive it northward, destroying railroad switches, telegraph lines, and generally causing chaos as they drive the train northward to coincide with a Union army attack. As the passengers disembark for a quick meal, the Union saboteurs strike and steal the train along with Annabelle, who still happens to be on it. Johnnie sees this and gives chase, managing to commandeer another locomotive to follow them.

The Union saboteurs believe that Johnnie is a vastly superior force rather than one guy, so they don't merely stop and fight him. The Union soldiers drop various bits of things in the way of Johnnie, who has to remove them single-handedly. Once again, the actual stunt work of Buster Keaton deserves praise because when you're watching it, you're reminded that this guy is jogging in front of a real moving train, getting caught on the cowcatcher, etc.

Eventually, Johnnie is able to catch up to the saboteurs when they realize that he is, in fact, alone. He manages to hide from them and sneak into the Union Army headquarters, where he overhears their attack plan while also rescuing Annabelle in the process. The two start to make their way back to Confederate controlled territory, but Johnnie is able to steal back his beloved The General from the Union army. 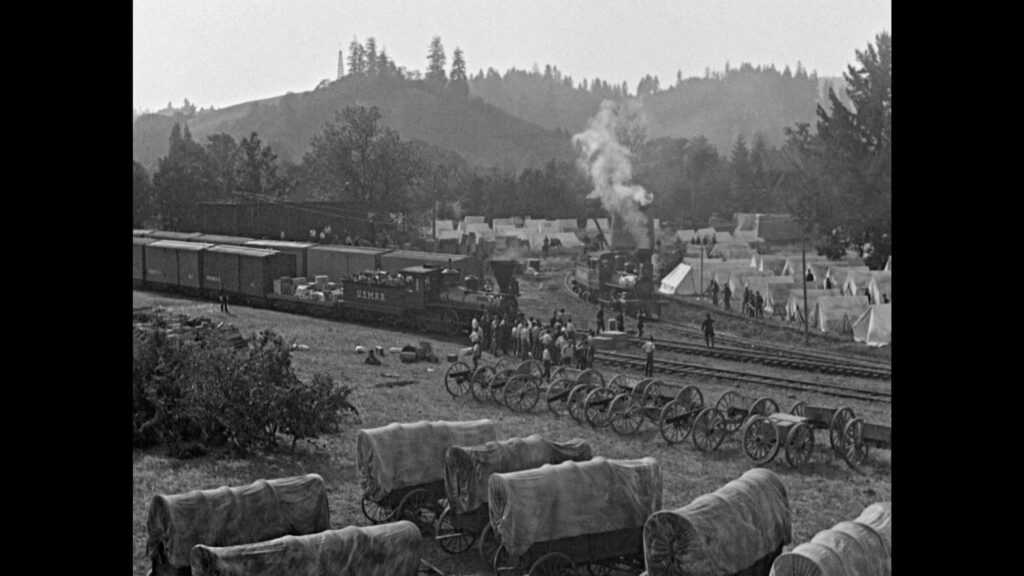 The Union Army?! The HORROR!

The same Union saboteurs pursue them. Only this time, it's Johnnie's turn to try and disrupt their pursuit. They manage to delay the pursuit to the point they are able to start a fire on a railroad bridge that their pursuers will have to go over. The Union commander orders the train to pursue The General, which leads to the most expensive scene ever filmed in silent movie history. As it goes across the weakened bridge, the other train collapses, and once again, this was all done in real life with a real train engine. 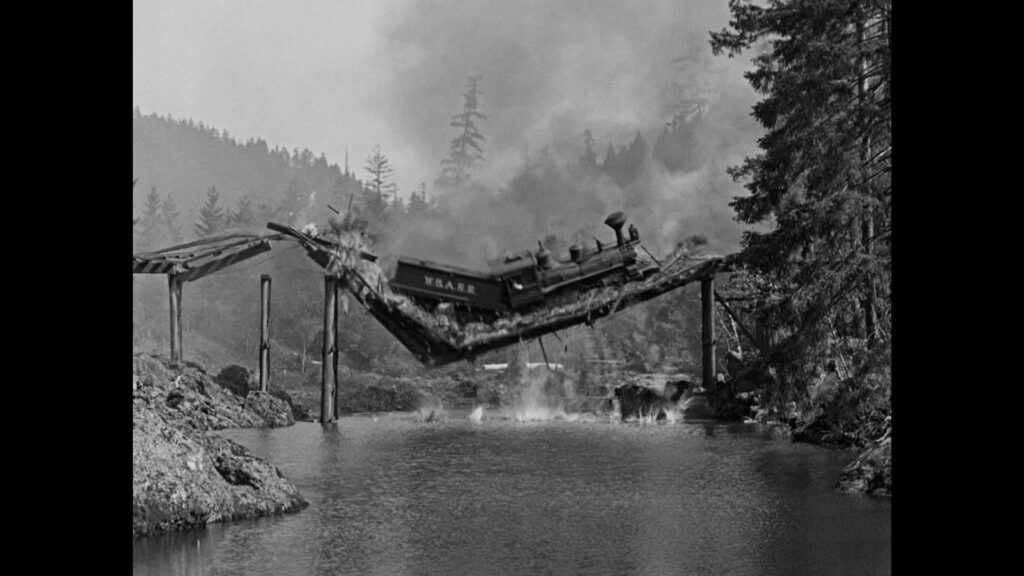 The kid in me loves this scene

The Union Army attempts to fjord the river but is repulsed by the Confederate Army. Johnnie returns home where he is made a Lieutenant, much to his chagrin with all the saluting he has to do to his fellow soldiers as they walk by him. He then kisses Annabelle, who is still a terrible person, I remind you. The End. 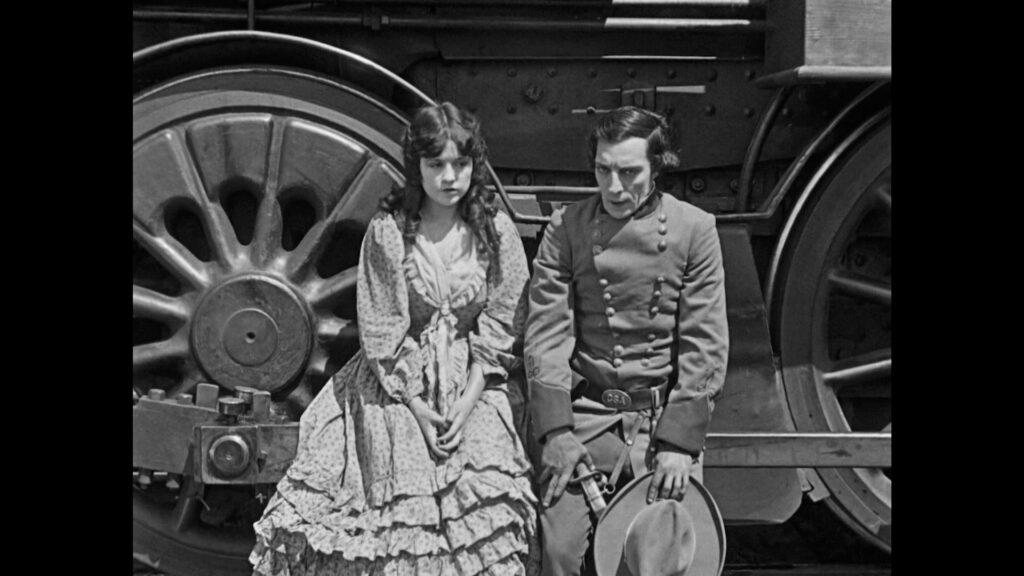 Thanks to you Johnnie this war will drag on for THREE more years!

Is It Worth Watching Today?

Let's go back to me, saying, "this one hurts."  The General is uniquely disappointing to me as it was to many audiences back in 1926, but for different reasons. Audiences in 1926 were disappointed because Buster Keaton was primarily a comedic actor in the vein of Charlie Chaplin, so here comes a movie that, while it does have some comedic elements to it, is mostly played entirely straight. While the shots of Keaton moving back and forth across a moving train are impressive, I was let down by the fact that this man, this god of his own stuntwork...didn't impress me honestly.

I also have to point this out; The General is based on a real event that happened during the Civil War in 1862 with what is called The Great Locomotive Chase.  Much like the real event, the Confederates "won" but ended up executing several of the Union men involved as spies. Furthermore, I have to scratch my head that, during a daring raid behind Confederate lines that resulted in some of the first Congressional Medal of Honors ever to be awarded, Buster Keaton and the movie decide to portray the event from the Confederacy point of view.

I try to view movies as a window into the time they were made, but given the fact that a mere eleven years before The General was released, The Birth of a Nation came out, which glorified the Ku Klux Klan as well as the "Lost Cause" myth of the Confederacy. Given that the KKK was hugely active in the 1920s, it makes one squirm a bit to see things like this. 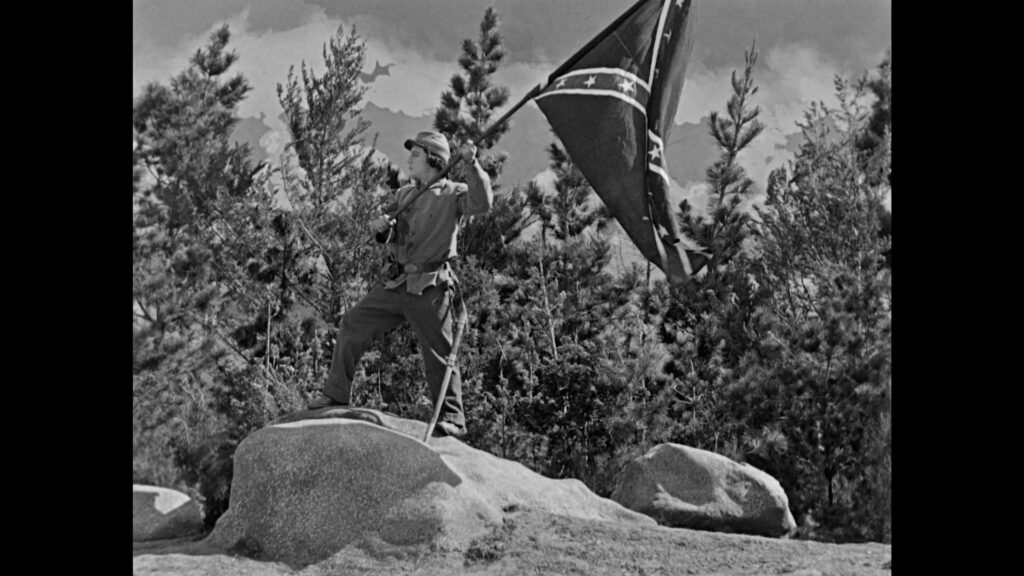 So to answer the question, no, it's not worth watching for most people.  The General is worth watching if you're some a train enthusiast or want to see Buster Keaton doing some cool stuff around a train. It's also impressive for its time with how the film was shot. I'm sure logistically, it was an absolute nightmare to make. It should also be pointed out that The General pretty much ended Buster Keaton's full control over his movies. Never again would he be given a blank check to do what he wanted, and one could argue his career began to slow from the insane pace it had through most of the 1920s after The General.

With the same story? No. Absolutely not. The more I reflect on the General to me, it is like if you made a movie about the Escape from Sobibor and had it centered around a German Guard's experience.

Disney ironically made a movie about the Union Army's side with The Great Locomotive Chase released in 1952. The only way The General could work as a modern movie would be to make it from the Union army's perspective. If you did a modern take on the film, it pretty much would come off as Confederate propaganda. However, if you had a gun to my head and said the only way The General gets made in a modern way is to make it from the perspective of Johnnie Gray and Annabelle Lee, then No, I would say it shouldn't be remade.

All in all, I was disappointed with this movie. I wanted to love it, I really did. But I didn't love it the way I thought I would. Buster Keaton is still a legend, and he had some great moments in this movie, but if this is his best...yikes.