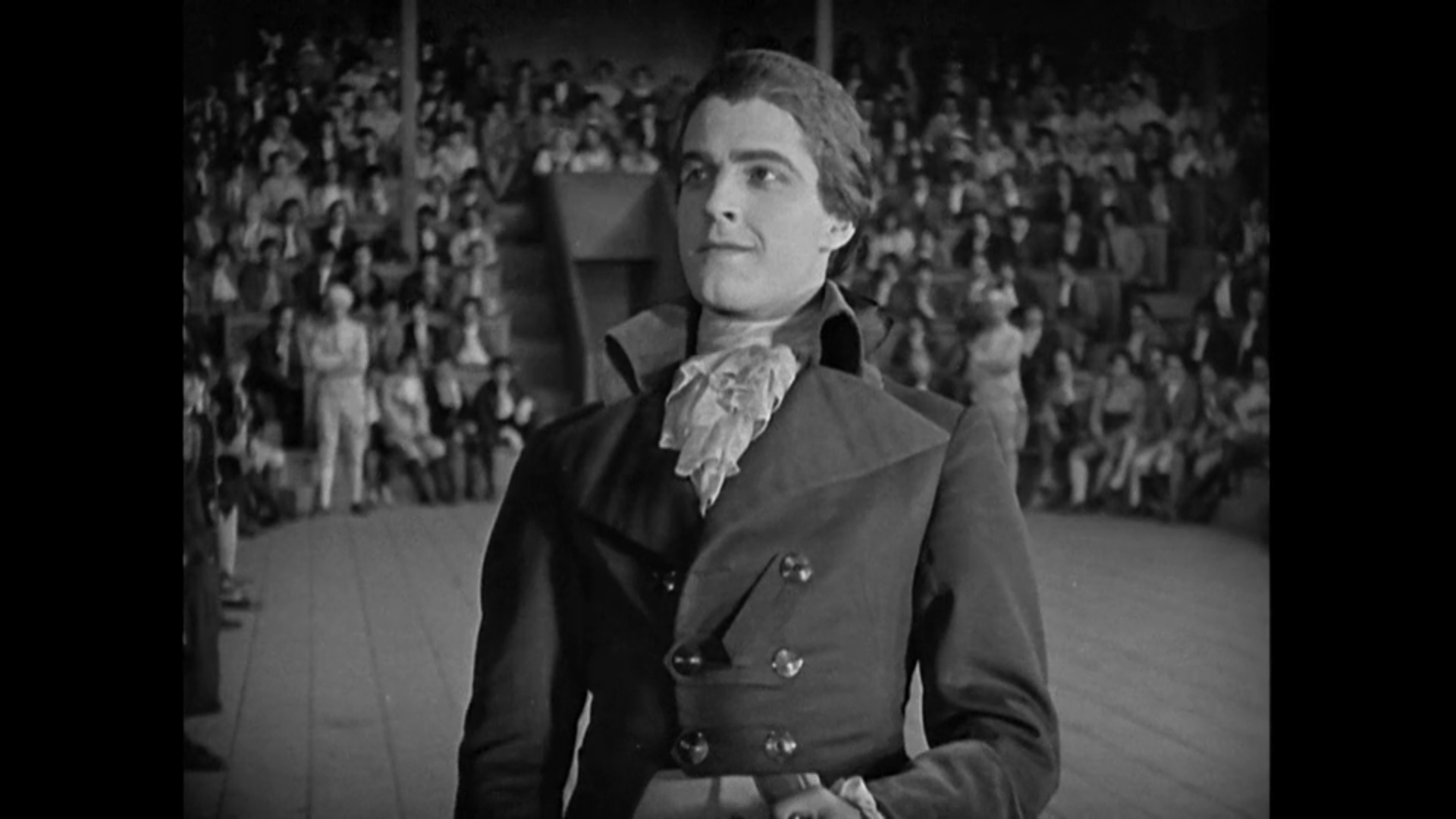 For my third movie, taking a look back at classic silent films, I had heard of both The General and Wings before I started compiling my list, but I had never heard of today's topic, Scaramouche. When I started this project, I promised myself that I would review a movie I had zero knowledge of, and when I was able to get my hands on Scaramouche, it pretty much checked all the boxes. It's not famous in its own right. There are no legendary actors (sort of, we'll touch upon that) to speak of, and it has virtually been forgotten by modern-day audiences. 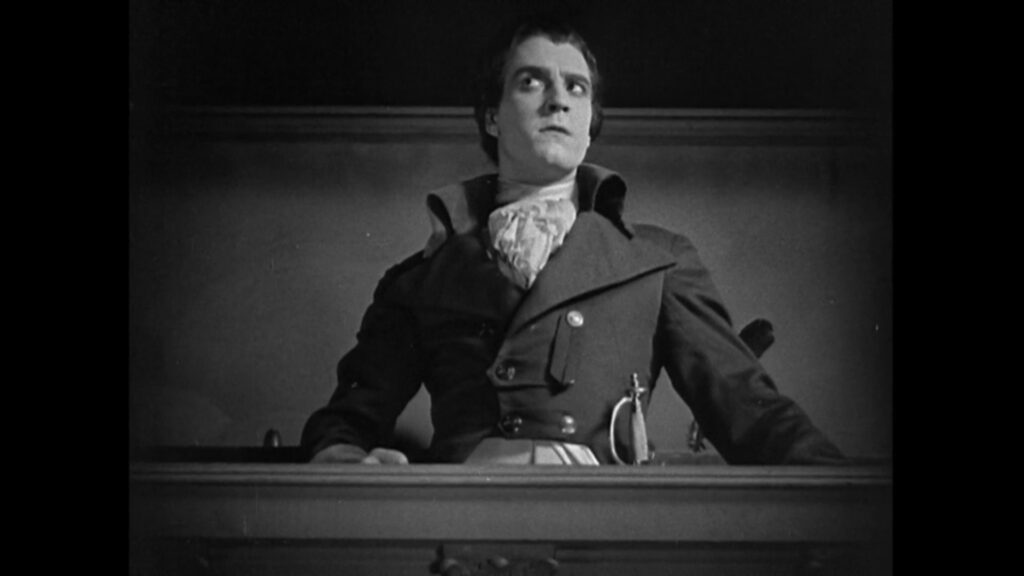 André is here to overthrow the King and chew bubble gum...and he's all out of gum

Scaramouche takes place in an era that hasn't been portrayed in-depth to modern movie audiences, and that is the French Revolution. And before you say, "But wait, Matt! What about Les Misérables?" Les Mis culminates in the June Rebellion, which was in 1832. Released in 1923 and based on a novel of the same name released in 1921, Scaramouche's main actors are Ramon Novarro, Alice Terry, and Lewis Stone. Directed by Rex Ingram, Scaramouche seemed to be a passion project (funny how most of these movies are passion projects for SOMEONE) from what I've been able to find. He acquired the movie rights of the book not long after it's release.

Plagued by delays and cost overruns, the movie was still a financial success when it was released, but I would argue that, other than the classic movie snobs, Scaramouche has been all but forgotten...but should it be?  Let's answer that question and more.

Scaramouche takes place around the beginning of the French Revolution in 1789, starting in the peaceful little village of Gavrillac. There, a young lawyer named André-Louis Moreau (played by Ramon Novarro) and his best friend Philippe de Vilmorin, having just returned to Gavrillac, are met with the sight of a poacher being unceremoniously dumped back in the town. The mortally wounded poacher dies, and the servant of the Lord of Gavrillac, The Marquis de la Tour d'Azyr (who I will simply call the Marquis, played by Lewis Stone) tells the villagers that this is the fate of those who would poach on the Marquis' lands. Both André and Philippe are aware of the upcoming Estates-General of 1789, which was an attempt by King Louis XVI to attempt to gain control over the massive financial issues France was suffering and address the grievances of the French people.

Philippe sees the killing of the poacher as a violation of the Estates-General's decree and says that the Marquis has violated the laws of God, King, and Humanity. As he does this, the Marquis himself walks into the room, and in a fit of anger, Phillippe strikes him. The Marquis challenges the hot-headed Phillippe to a duel, which he readily accepts. Philippe loses the duel to the experienced Marquis, who toys with the young man before killing him with his sword. André is enraged after watching his friend die before him and swears vengeance on the Marquis...so he goes and seeks it from the King's Lieutenant. 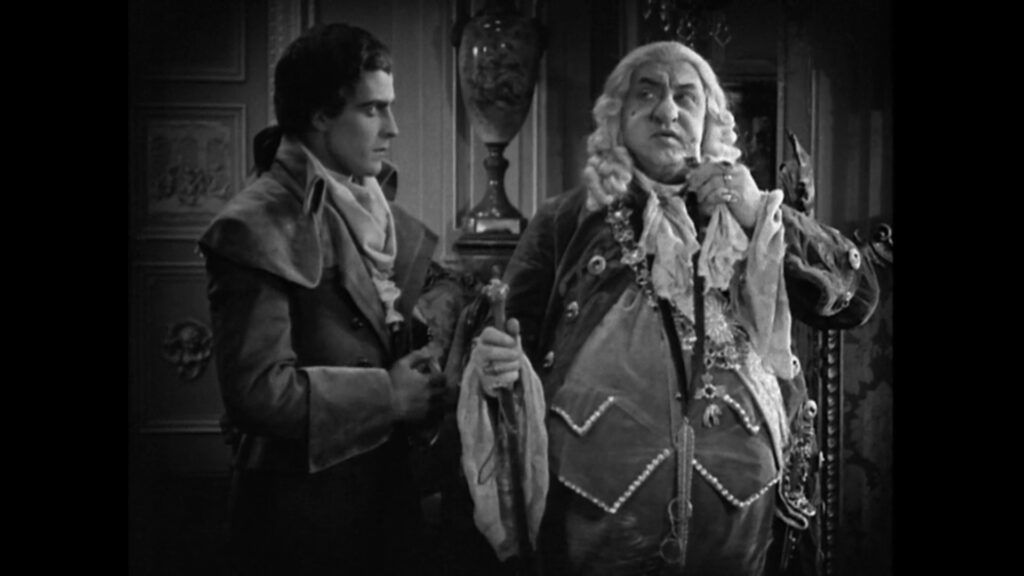 The King's Lieutenant, who at first is all for prosecuting the man who murdered Philippe, finds out that the killer is the Marquis and instead orders his guards to arrest André, who is forced to flee. André takes the place of an assassinated orator outside the Lieutenant's residence and rallies the crowd to the ideas of liberty and justice. To avoid the Lieutenant's troops, he hides out amongst a traveling troop of performers and says he will write their shows for them with the only caveat being that no one must know his name.

André himself performs as Scaramouche, a clown character portrayed as far back as the 1600s. André's talent brings the traveling troop a lot of money, and they begin to perform at more and more grandiose venues. 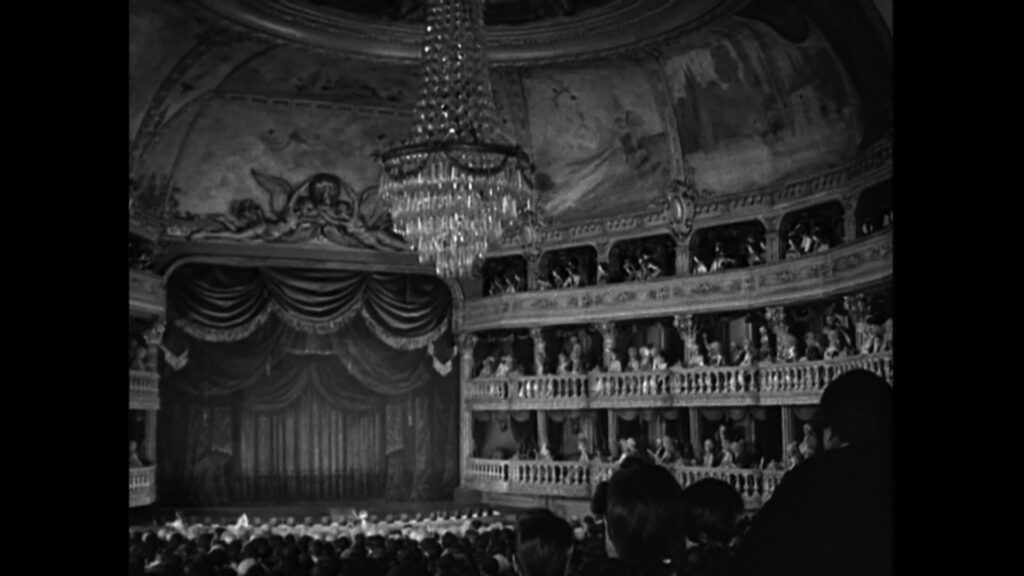 During one of their shows, André sees the Marquis and the love of his life, Aline de Kercadiou (played by Alice Terry). Aline recognizes André and meets with him, telling him that she is betrothed to the much older Marquis and cannot have a relationship with him. André is angry at Aline, saying she has compromised herself by being with the man who murdered Philippe, but Aline says they can't have a relationship anymore.

After she leaves, André, who himself is engaged to another woman named Climène, finds out that she has been having an affair with the Marquis. When he confronts Climène about this, she dismisses André telling him that she would rather have a gentleman than a commoner like him. Aline meanwhile manages to catch a glimpse of the Marquis and Climène together and breaks off their courtship.

Meanwhile, the Estates-General occurs, and the Aristocrats are angry that they can't get the Third Estate to bend to their will. In response, they start challenging their opponents to duels that the trained Aristocrats easily win. Georges Danton, realizing that they need someone to defeat the Aristocrats, goes and seeks out a skilled swordsman to fight on their behalf, and of course, he finds André. André readily agrees, and he starts to kill members of the nobility via duels. He challenges the Marquis himself and defeats him, then allowing him to live in a tense fight.

However, things come to a head with the storming of the Tuileries Palace on August 10, 1789. This fully set in motion the events that would lead to Louis XVI being guillotined and the eventual rise of Napoleon (who is shown in a scene for some reason). 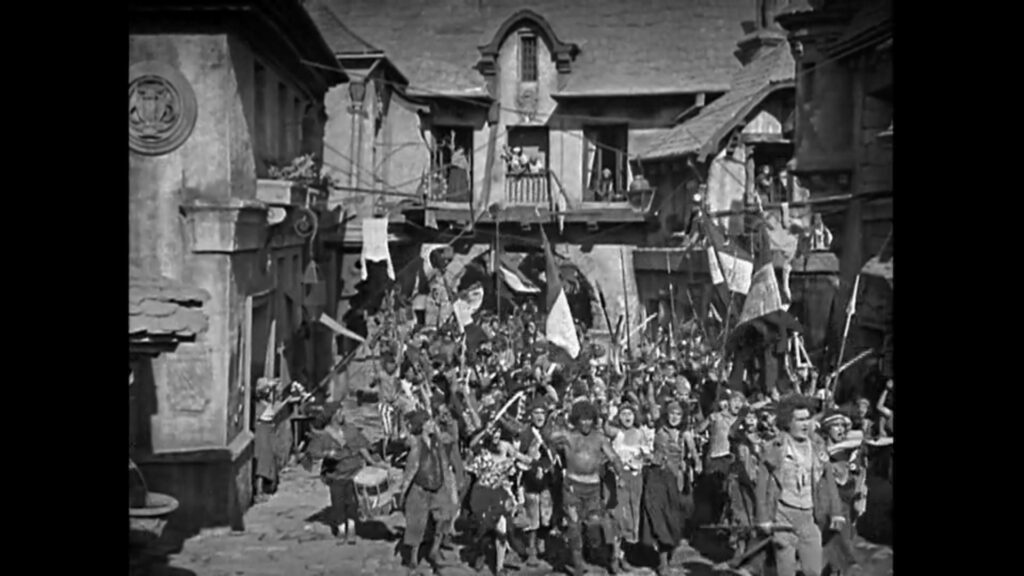 André, who has shown his value to the newly minted Paris Commune, is given a letter by Danton that essentially appoints him as a minister for the Commune. The bottom line is that it lets André do whatever he pleases. He uses this new authority to try and rescue Aline from the Mob running rampant through Paris and killing the nobility. The Marquis, who survived Tuileries' storming, has managed to make his way to her residence and demands a passport to leave Paris from André, who refuses. It is at this moment that André is told that his actual father is the Marquis.

The Marquis says he wants peace between the two, but with the crowd growing closer, the Marquis says he will stay and meet the crowd while everyone else makes their escape. The Marquis meets his end at the hands of the crowd, and André manages to convince them at the gates of Paris to let both Aline and his Aristocrat mother (long story) out of the city rather than having them subjected to the Mob's justice. The end.

Is It Worth Watching Today?

Yes. Absolutely. I was quite surprised by how engaging I found Scaramouche. There is a ton of quality on display here, especially in the costumes and sets. 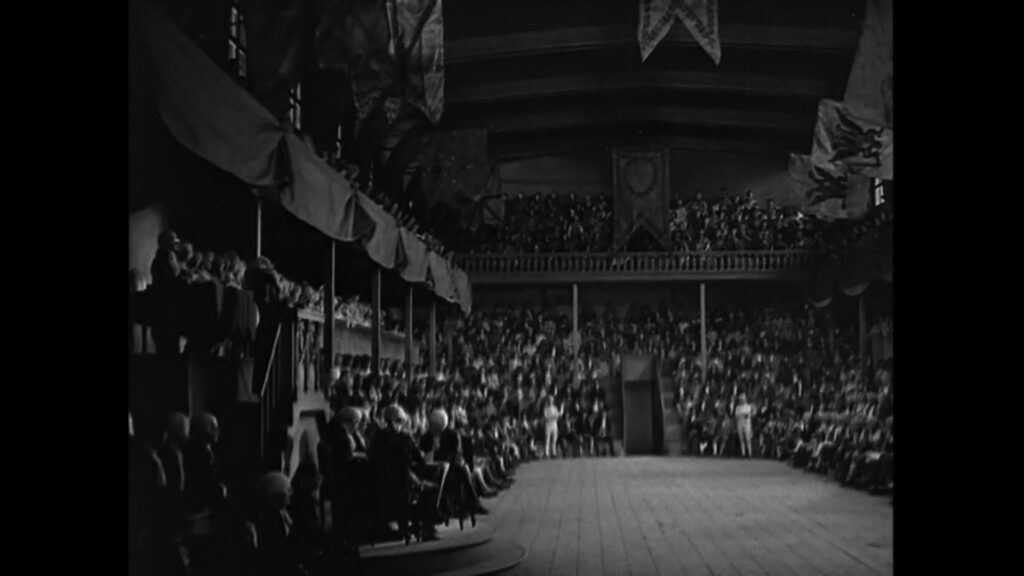 The Aristocrats look overdressed and decadent, the commoners look filthy and dressed in rags, and many of the set locations look great even in picture quality from 1923. The story is pretty timeless, a young man who works to institute justice for people against a corrupt, wealthy elite to whom the law doesn't apply. Seriously, can you honestly tell me that message doesn't hold meaning today? Yes, there are many old movie tropes, but Scaramouche legitimately did many things very well.

I said this movie didn't have any "big" names, and it's partially true, but I should point out that Ramon Novarro was a big star in his day and was widely considered a sex symbol after the untimely death of Rudolph Valentino. I use the term "big star" because Novorro didn't transcend the generations the way Chaplin or Keaton did. But I must give credit to both Novarro and Lewis Stone because I thought both did their roles well, with Stone getting a particular nod for his portrayal of the Marquis.

So, yes, I would say it's worth watching today.

Yes! Hell, it's a shame it hasn't been. The French Revolution isn't an event given a ton of love by modern movie studios, and for a story, you could fit this into a modern audience's wheelhouse without too much re-writing. I would predict a modern take on Scaramouche would immediately win an Oscar for best costumes because just from what I've seen in the 1923 version, it makes me think this movie could probably win the award today. 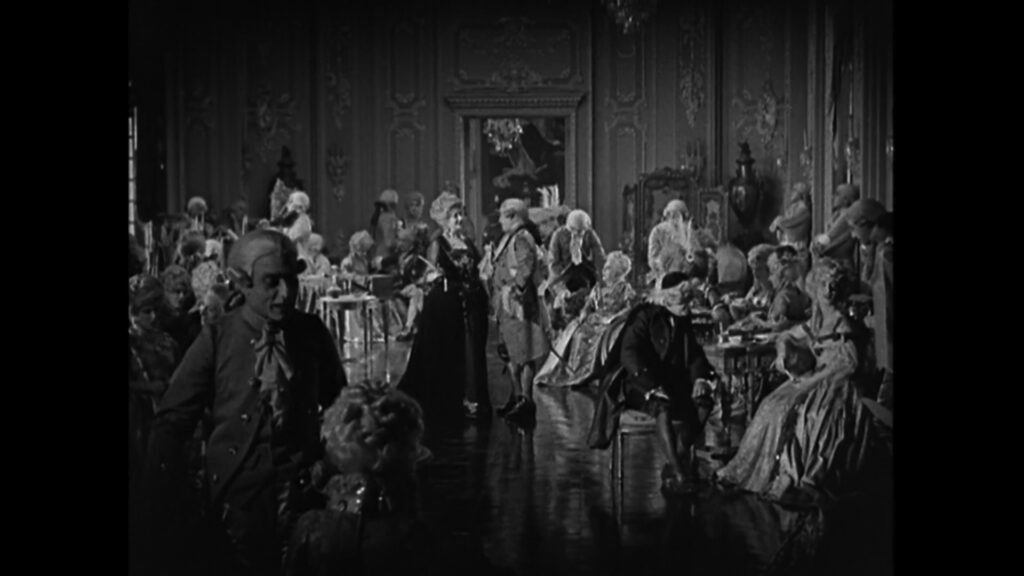 Imagine this scene in 4K folks

I'm not going to pretend that Scaramouche is a perfect movie; it certainly has it's moments that I was like, "wait, what?" But as an overall experience? Worth it. I think that with the right director, a modern take on Scaramouche would be something worth seeing.