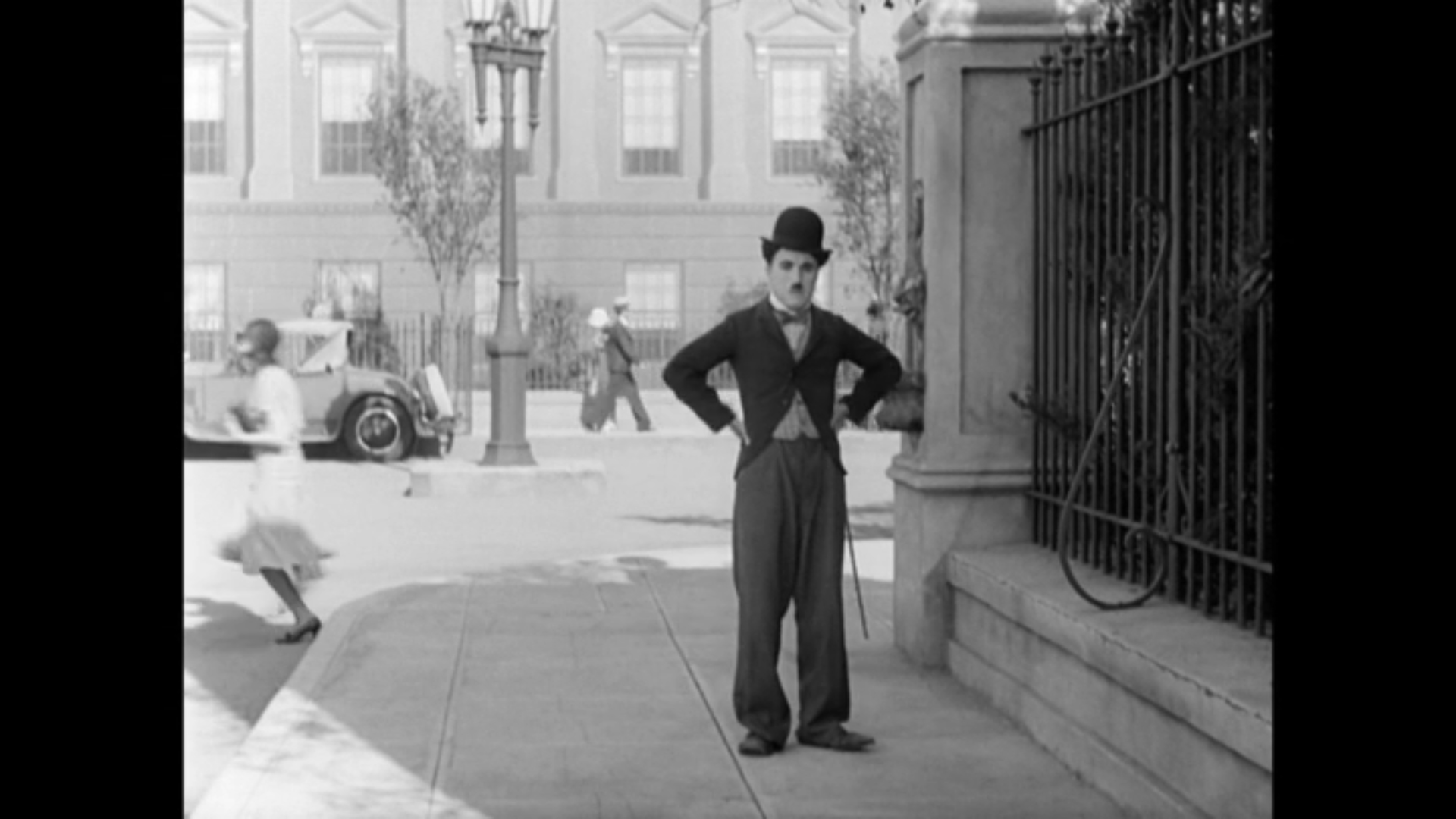 When I started Old School October, which also led to November to Remember, I knew two things from the get-go that I wanted to do. The first was to watch a Buster Keaton movie, which I did with The General and the second was to watch a Charlie Chaplin movie.

Charlie Chaplin is a name known to many, many people. I don't think many people my age have seen any Charlie Chaplin movies; they just know he was kind of a big deal. Most people's experience with Chaplin is the 1992 film of the same name where a 27-year-old Robert Downey Jr. plays Chaplin himself. Here's the trailer for it if you're interested.

But going back to the man himself, Charles Chaplin was born in England in 1889, the son of music hall entertainers. Young Chaplin endured a life of hardship and poverty but had a career as an on-stage performer in vaudeville shows. In 1914 he started working for Keystone Studios in their movies, and his rise began quickly, arguably from the mid-1910s through the 1930s. During this time, Chaplin was a global tour de force. Many of his movies stand as all-time classics like The Kid, The Gold Rush, Modern Times, and of course, The Great Dictator.

However, the film that's widely regarded as one of Chaplin's best and is the subject of this article is, of course, the 1931's City Lights. Chaplin was skeptical of "talkies," even though they were quite prevalent by this point. Chaplin believed that the "talkies" lacked silent films' artistry and didn't make a movie with full speech until 1940. Chaplin was eventually run out of Hollywood and, indeed, the United States as a whole (long story) and settled in Switzerland for his remaining years. He was given an honorary Academy Award in 1972 and passed away in 1977 at 88.  City Lights is regarded as one of his best films. Does it hold up? Let's get into it.

City Lights opens up with a statue's unveiling where we get our first look at Chaplin's legendary persona, the Tramp. The Tramp is probably what you think of when you think of Charlie Chaplin: dumpy clothes, the cane that bends, and of course, the mustache. The Tramp is sleeping on the statue, much to the annoyance of the audience. Chaplin shows off some of his physical comedy in this scene, and I was amazed at how smooth and natural it seems to come to Chaplin. Chased away from the ceremony, Chaplin further demonstrates his comedic timing. There's a scene where The Tramp is admiring the statue through a store window. As he does, a small platform goes up and down without him noticing. 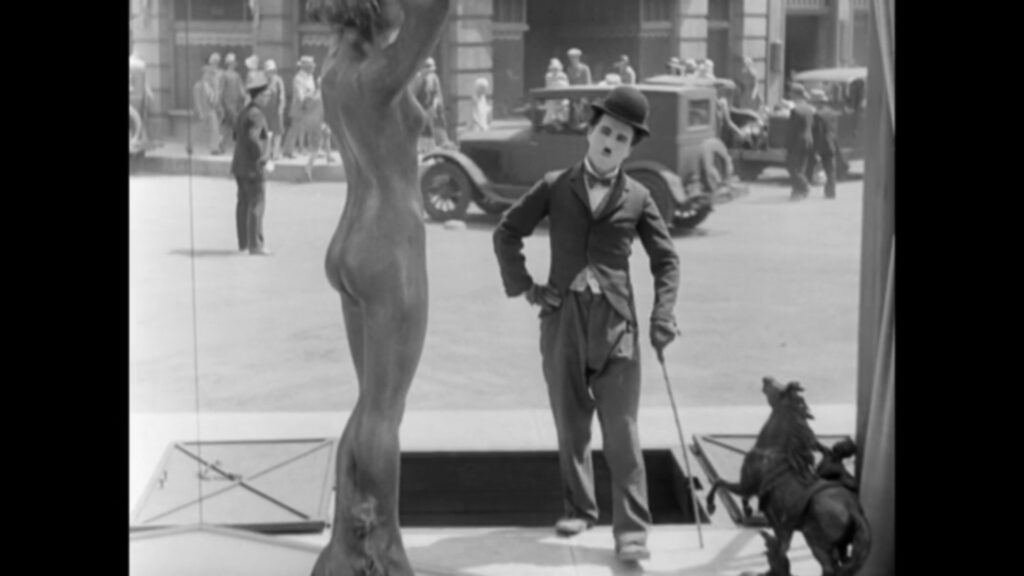 It's impressive to watch because Chaplin is very clearly standing on the edge of the drop into the sidewalk and gives no indication that he is even aware of it.

A bit later, he encounters a pretty young woman (played by Virginia Cherrill) with whom The Tramp is instantly smitten. He buys a flower from her and accidentally drops it, and after watching the girl feel around on the ground, he realizes that she is blind. When the girl mistakes the sound of an expensive car door closing as the Tramp leaving, she thinks him to be the owner of a chauffeured automobile. I want to highlight the scenes between the Tramp and the flower girl as Virginia Cherrill does a great job portraying the kind, sensitive soul that the Tramp is attracted to. Their scenes have some great chemistry. 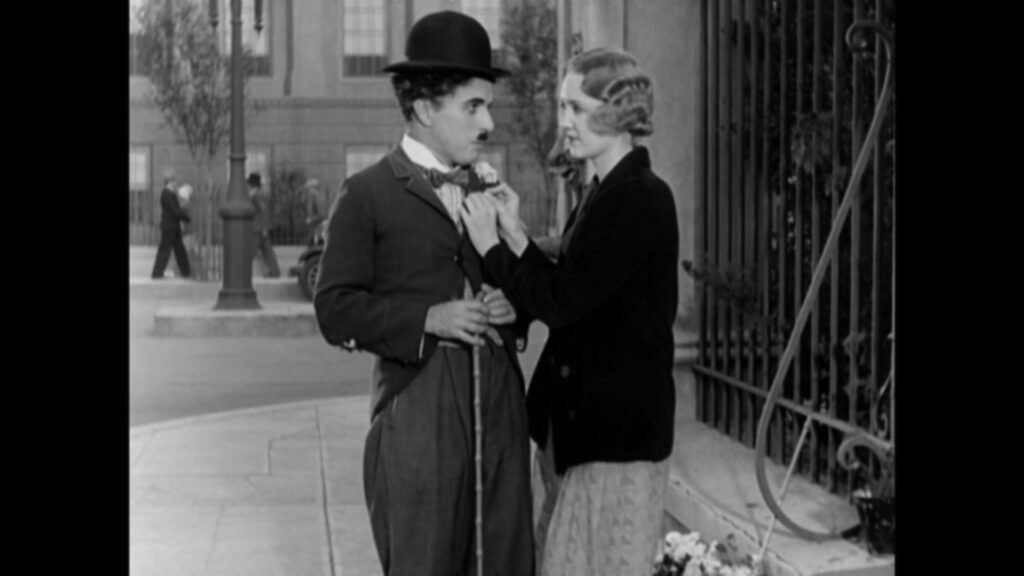 THESE TWO ARE ADORABLE

Later that evening, the Tramp happens upon a drunk man attempting to drown himself and manages to save his life. The man, who is, in fact, a Millionaire (played by Harry Myers) thanks the Tramp for saving him and says they're now friends. The Tramp helps him home and sees the flower girl going to her street corner. He gets money from the Millionaire and buys all the flowers from the girl who now thinks the Tramp is wealthy. The Tramp goes back to the Millionaire's house the next day, but the now sober man throws him out.

Later in the evening, the Tramp reencounters the drunken Millionaire, who only seems to recognize him when he's drunk off his ass, and he invites the Tramp out to a party. After a night of carousing, the two go back to the Millionaire's house, only for the Tramp to be thrown out again the next morning.

The Tramp goes to the flower girl's home and reads the newspaper to her, which has an article about a Vienna doctor who can cure her blindness. The Tramp gets a job as a street cleaner to help the girl but is eventually fired from it after being late too many times. The Tramp also finds out the girl and her grandmother will be evicted if they don't pay 22 dollars (about $375 in today's money). The Tramp enters into a boxing match where the winner walks away with 50 dollars. The Tramp has an agreement with another boxer that he'll lose, and they'll split the money, but the other fighter runs away when he hears the police are looking for him.

This leads to the Tramp getting put into the ring with an uncompromising hardass, leading to a fantastic comedic scene. The Tramp dances around the ring, keeping the referee between him and the other boxer, hitting him at opportune times. The amount of choreography that had to have gone on is undoubtedly impressive. 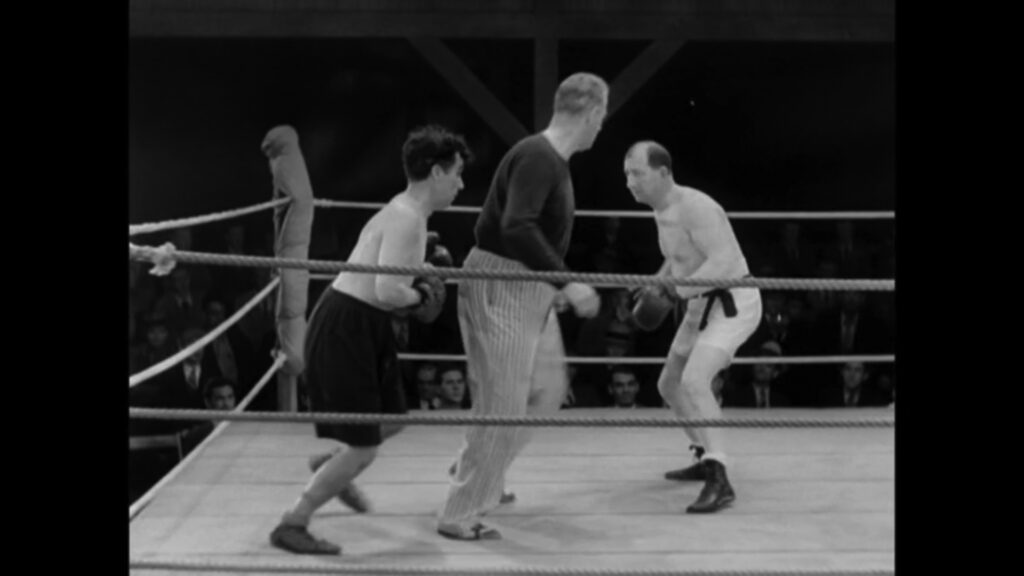 The amount of work this scene must've taken is insane

The Tramp does surprisingly well, even seeming like he might even win the fight against the other boxer, but he eventually gets knocked out and walks away with nothing. Despondent, he again runs into the drunk wealthy Millionaire who takes him home and says he'll help the girl out. He asked the Tramp, "Will a thousand dollars do?" which leads to Chaplin's fantastic reaction. 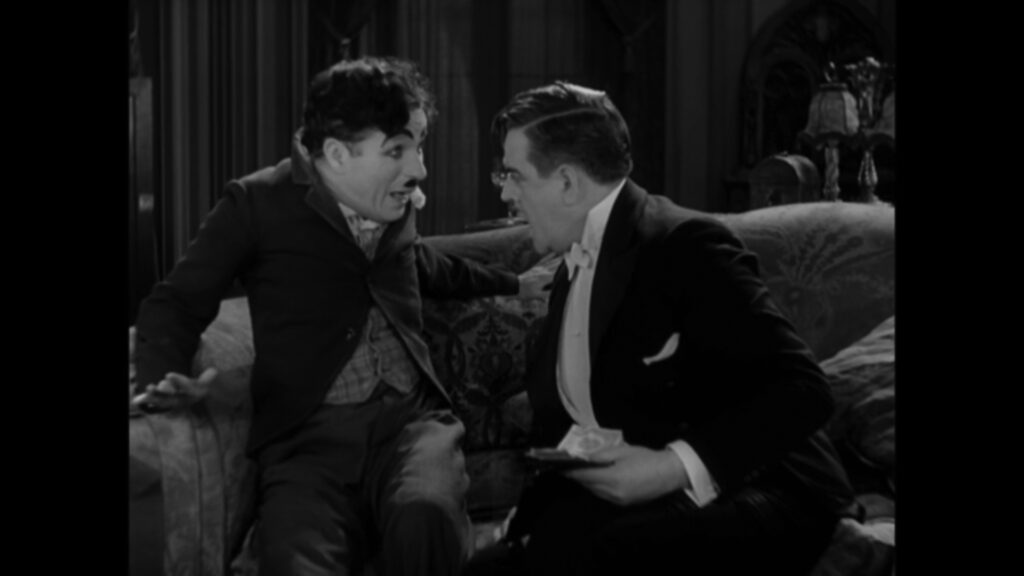 He went to Jared!

However, two burglars break into the house, knock out the Millionaire, and take the rest of his money. The police naturally think the Tramp did it and since the Millionaire can't remember, try to chase him. The Tramp manages to slip away from the police and gives the money to the flower girl. She asks him if he's going away, to which the Tramp dryly replies, "For a while." He gives her a kiss on her hand and leaves.

He then goes and turns himself in to the police and is locked up for a time. Walking the streets, he sees a flower like the same one the girl had pinned on him when they first met. He picks it up out of the gutter and turns to see the Flower Girl, who can now see and owns her own flower shop. She invites him inside, offering both a coin and a replacement flower for the one he has in his hand. Embarrassed that she'll discover who he is, The Tramp tries to leave. She reaches out and grabs his hand and, at that moment, recognizes who he is by the touch of his hand. 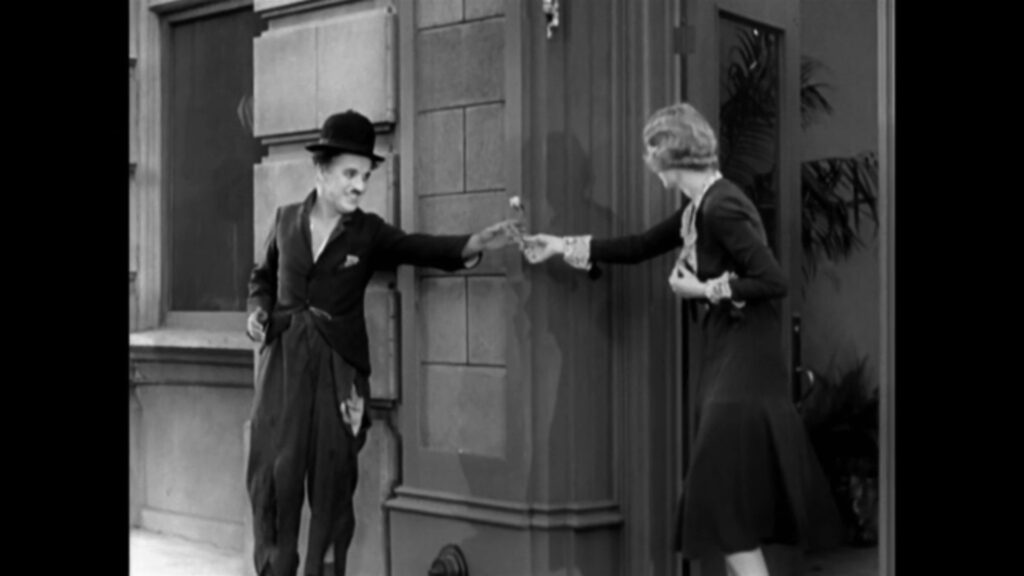 The girl says, "You?" The Tramp nods and asks if she can see, and when she says she can, the Tramp smiles in relief, and the movie ends.

Is it worth watching today?

City Lights is worth watching if you want to see the master of silent film era comedy do his thing. City Lights moves between comedy and drama in a way that many films fail to. Pretty much every central character nails their roles. The comedic timing of the movements is perfect, and it doesn't feel like a single scene is wasted. Chaplin wrote, directed, and produced City Lights, and one can tell that Chaplin demanded perfection in both himself and everything else in his movies.

I would say that modern audiences should watch City Lights because it shows what made Charlie Chaplin a star. The man could act without saying a single word. His facial expressions and movements show more emotion than many modern actors.  City Lights shows why Chaplin was and should still be considered a legend.

Ironically enough, no.  City Lights is defined by Charlie Chaplin, and I honestly can't think of any modern actor that could pull off what he does. Yes, you could remake City Lights, but I don't think it would have even remotely the same impact.  City Lights is tied to Charlie Chaplin, and without the man himself to make the movie, I don't think you should even attempt it. Furthermore, so much has changed that you would have to fundamentally re-do the entire premise. There are no flower girls, and homeless characters like The Tramp aren't viewed as lovable losers by the public.

City Lights is worthy of the praise it gets folks; Chaplin can reach across the decades and show that he can make a better movie than many directors and actors of today.