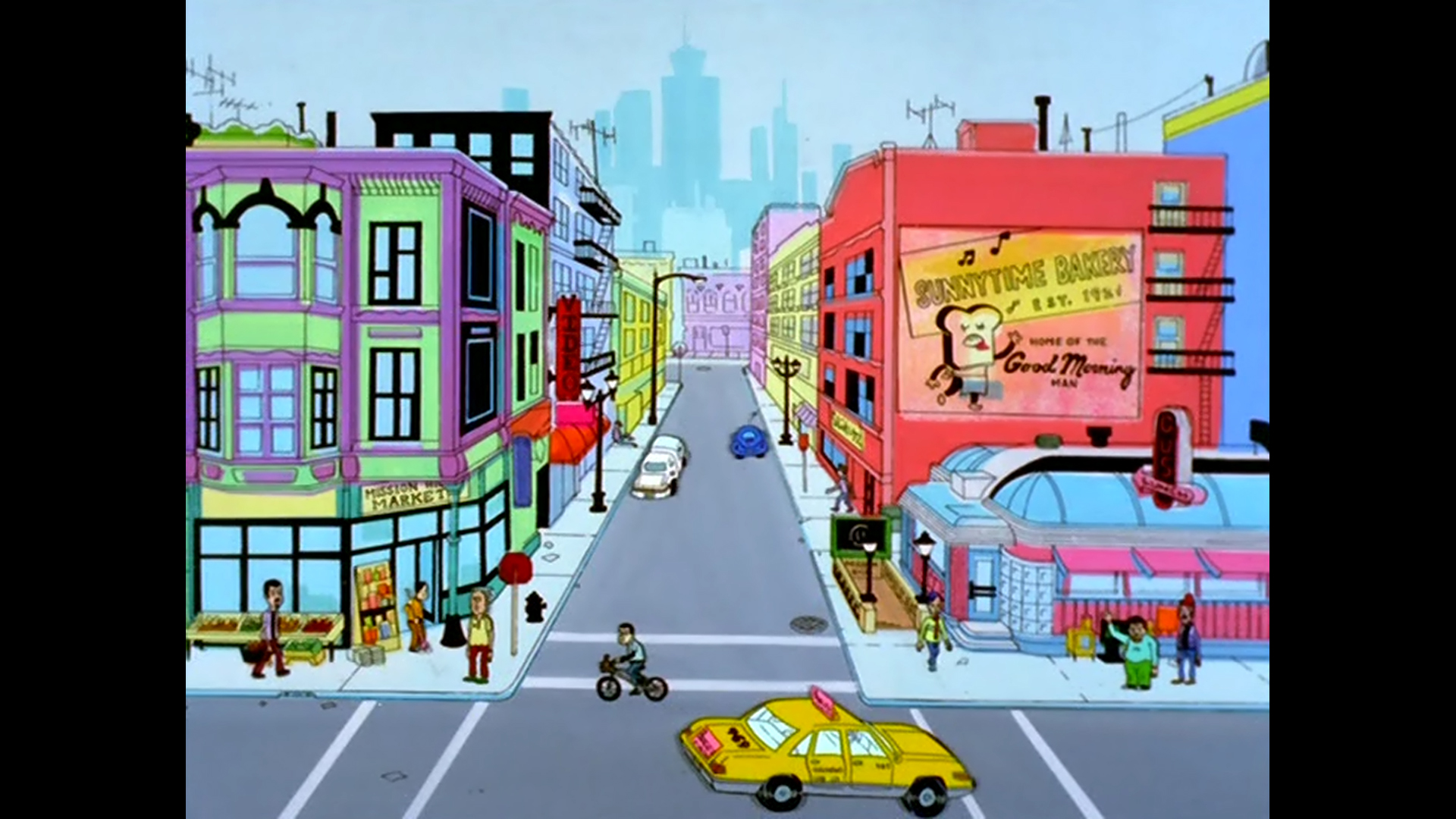 "Kevin, do something! How much fun is college going to be if everyone's drinking beer and having sex all the time?"

When I was growing up in the 80s and 90s, my brother and I were latchkey kids. For those of you who've never heard the term, it essentially means that you came home from school, let yourself into your house and were generally left to your own devices until one or both of your parents came home.

With my mother being a flight attendant and being away for days at a time and my father working at a hospital, which meant he usually didn't come home until 5 or 6 PM, it meant that my brother and I had a few hours of non-supervision. This lifestyle pretty much lasted my entire childhood and early adult life, and during this time, I watched a hell of a lot of animated shows.

That lifestyle of mine is what helped get me into a lot of the things I'm into today. Animated shows just spoke to me in a way that few things could, I always enjoyed the way that animation interestingly presents the mundane and love the way that it allows the imagination to run free when it wants to. There are a ton of animated shows, and one could argue that the late 90s to mid-2000s was an almost golden era of animation.

Having said all that, let me introduce you to my latest project, and that is Animation April. Throughout the month of April, we'll be revisiting TV shows from a mostly forgotten era of television. Some you may have seen, some you may have not. You may be meeting some new friends or remembering some old ones, but let's kick it all off with Mission Hill.

Mission Hill is the brainchild of Bill Oakley and Josh Weinstein. Ironically enough, I remember seeing both their names before, but until I researched writing this article, I didn't remember why. Both Oakley and Weinstein are former writers for The Simpsons and were responsible for writing some good classic episodes such as "Marge Gets a Job," "Bart vs. Australia," and "Who Shot Mr. Burns?" They later became executive producers and made other classic episodes like "Homer's Enemy" and "Two Bad Neighbors."

First airing in 1999 Mission Hill is set in the "fictional" neighborhood of a city called Cosmopolis. I put the word fictional into quotes because Mission Hill is an actual section of the city of Boston. Oakley and Weinstein said that they actually planned the city to be fictional. However, the world of Mission Hill was designed to not be real but very much "functional."

The series takes place around a set of characters. Older brother Andy French voiced by Wallace Langham, who would go on to star in CSI for 12 years after Mission Hill, and the younger brother, Kevin French voiced by Scott Menville whose main claim to fame has been the voice of Robin in both Teen Titans and Teen Titans Go! Jim Kuback, who was voiced by Brian Posehn, had roles on the Sarah Silverman Program and a guest role on the Big Bang Theory. Finally, Posey Tyler voiced by Vicki Lewis, who played Beth on the sitcom NewsRadio.

The show centers around the relationship of the two French brothers, Andy and Kevin, who have your standard, older "cooler" brother and younger, geekier one relationship. Kevin is dumped on Andy by his parents, who are moving to Wyoming, and Kevin would rather live with Andy in the city than with them.

The show mainly centers around the relationships of both Kevin and Andy, who are as different as one would expect. Andy is in his 20s and has obviously been living on his own for some time while Kevin is rather sheltered and socially awkward. Andy is an aspiring cartoonist who works at a mattress store while Kevin is looking to graduate high school and go onto big schools like Yale.

The fact that the two of them don't fully understand each other but still love and care for one another is one of the driving forces behind the show. Some episodes also have a storyline involving the two other roommates of the loft apartment that the French brothers inhabit. 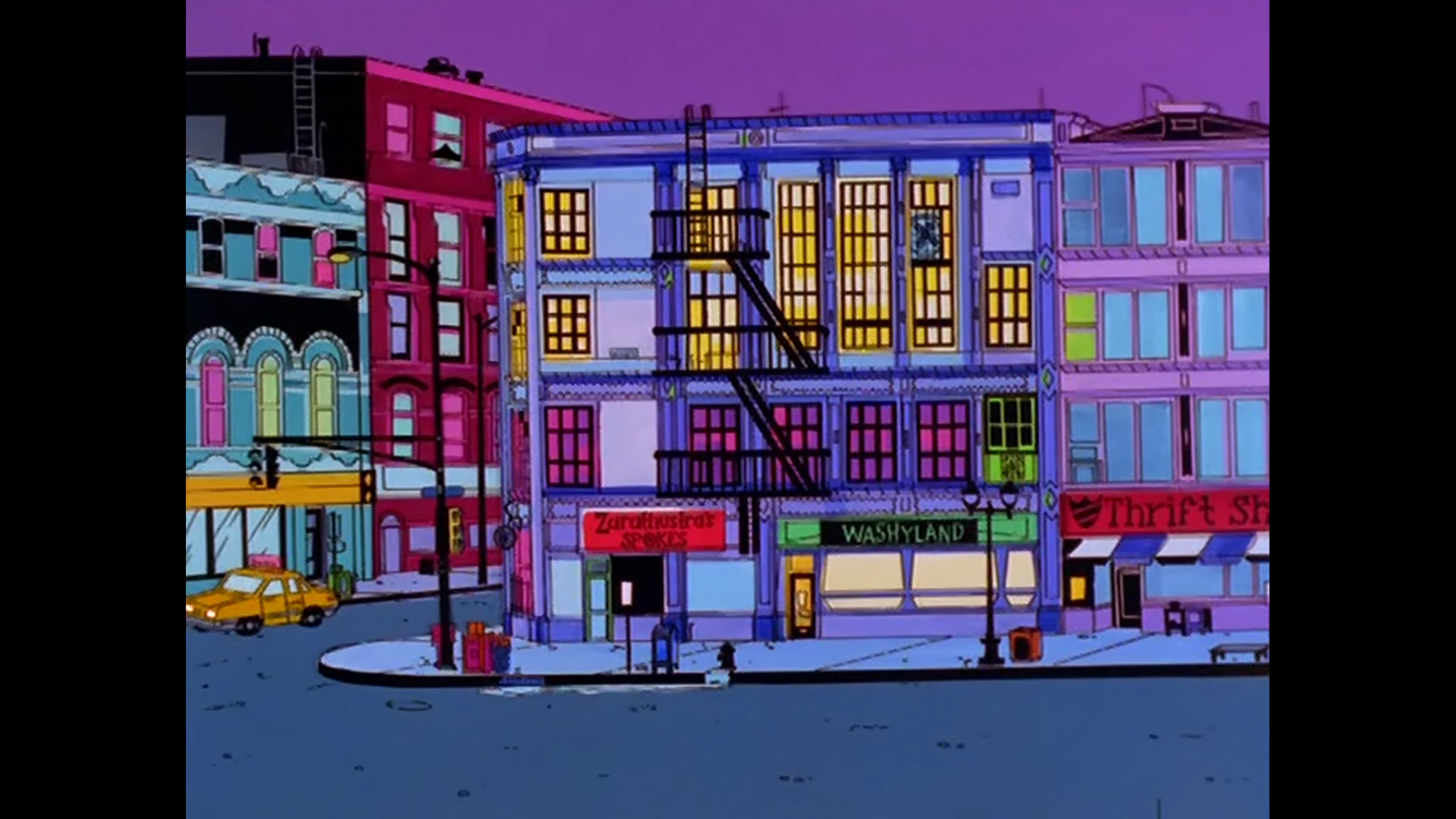 Jim Kuback is the bearded, tech-savvy guru who somehow maintains a calm demeanor in almost any situation. Out of all the roommates in the apartment, he is probably the one that brings in the most money, but Jim is the type of guy who never holds that above your head, he is loyal and the chill friend we all wish we had. The other roommate, Posey Tyler, is a late 90s hippie that often permeated the pop culture landscape at that time.

Some of Mission Hill's greatest moments, however, come from both Gus and Wally, an older gay couple. Gus is a large bald man who owns a diner while Wally is a projectionist at a movie theater. The two of them have some of the funniest interactions in the entire show. In one episode, when Gus gets stabbed in the head, he simply leaves the knife in while Wally freaks the hell out about it and tries to remove it using methods a kid would try and get out a loose tooth. The introduction of the two is them kissing, which was the first time I could remember an animated show portraying a gay couple kissing. 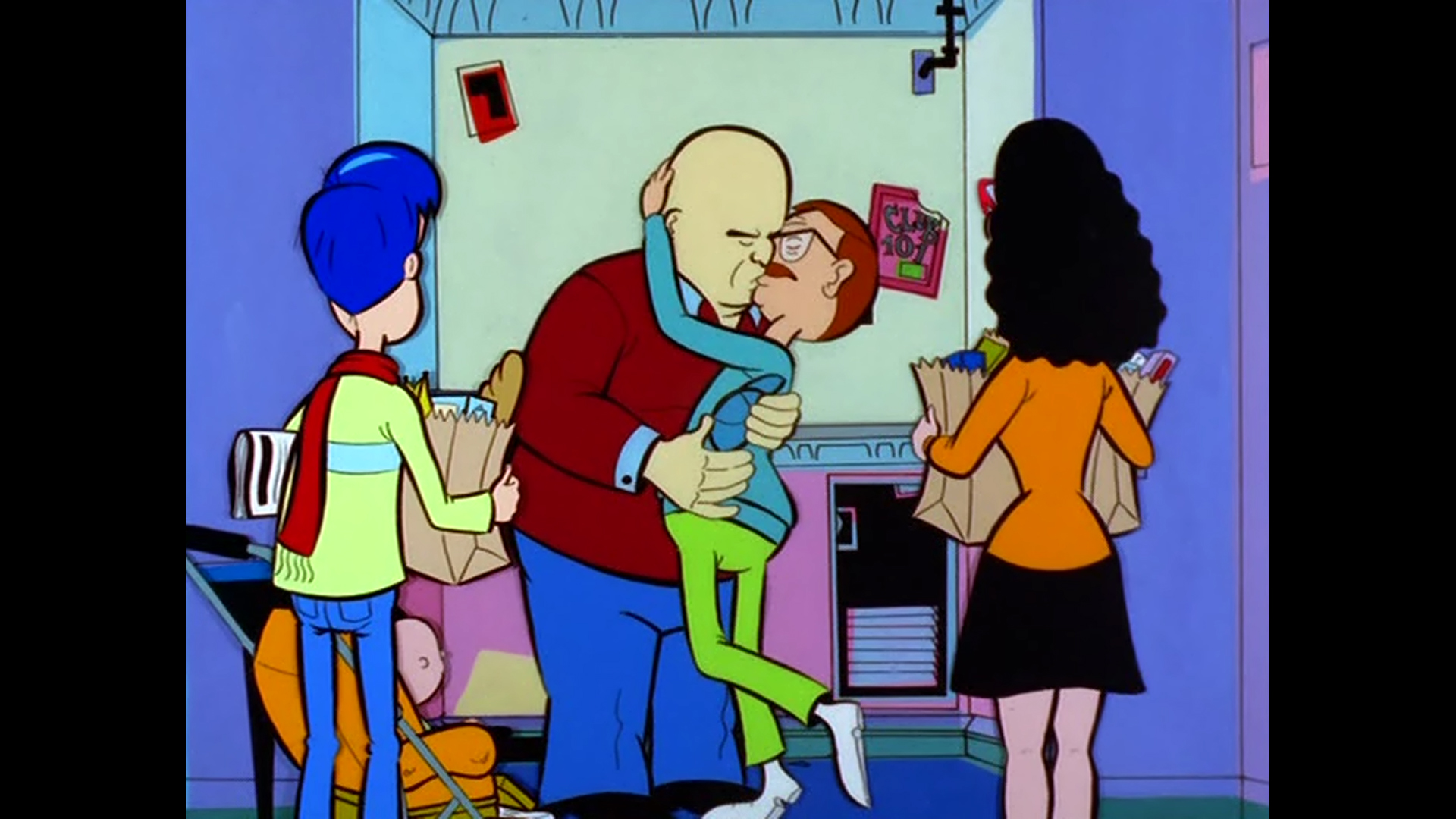 Remember, this show first aired a mere two years after Ellen Degeneres' famous "coming out" episode. It was genuinely surprising for an animated show to do this, and the show didn't treat the two of them differently.

The art style for Mission Hill can be hit or miss honestly, and the settings can have a "paint outside the lines" feel to them. You'll see colors that don't fit within the lines, and here is an example of it. 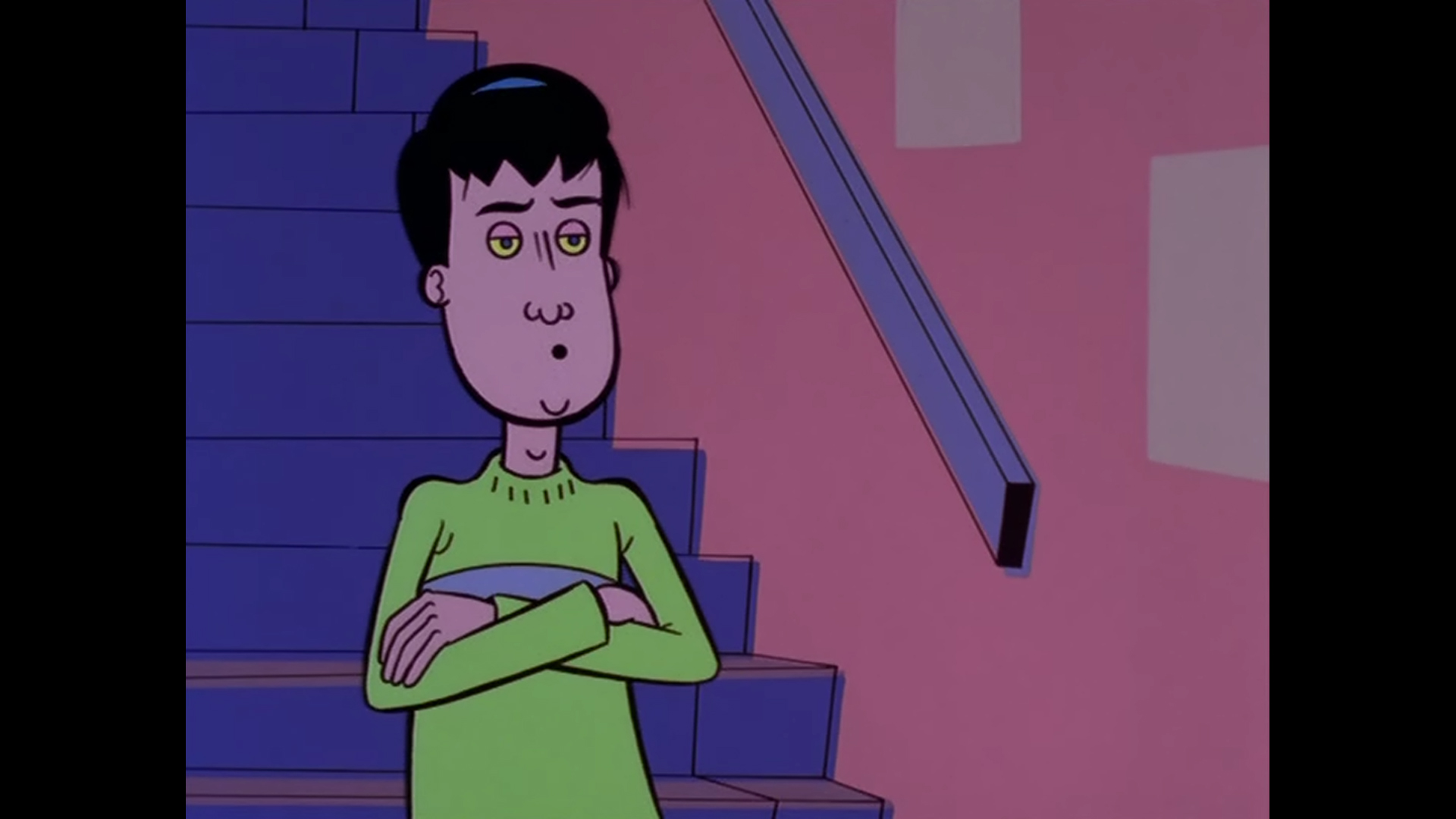 Look at the bottom of the railing

The colors of the settings and characters are unique and varied, while the blue hair of the French brothers is more at home in an anime than your standard American animated show. However, Mission Hill is supposed to look like that by design, but if you're the type of person who enjoys your animation to be a little "cleaner," it might jar you slightly.

Mission Hill first aired in 1999 but didn't finish airing until 2002. It was first broadcast on the WB Network but was on hiatus after two episodes. It came back again in the Summer of 2000 but once again was canceled after four more episodes. The show found new life on Adult Swim but even though 18 episodes were planned and written for, only 13 were ever produced.

I should also mention the intro music, which is catchy as hell and always stuck in my head. I discovered it was a sped-up version of the Cake song Italian Leather Sofa, Never heard of Cake? Does "Reluctantly crouched at the starting line" sound familiar?

Mission Hill got a DVD release in 2005 which is currently the only way you can ever watch it legitimately without resorting to Youtube. It hasn't made it to any streaming services and is generally forgotten about in the pop culture world. While it's not a perfect show by any stretch of the imagination, it's worth watching for how it was a pioneer for certain issues and doing it in an honest and forthright manner.

You can score the DVDs for less than 20 dollars if you're interested in watching it go out and give it a try you might enjoy this piece of late 90s animation.