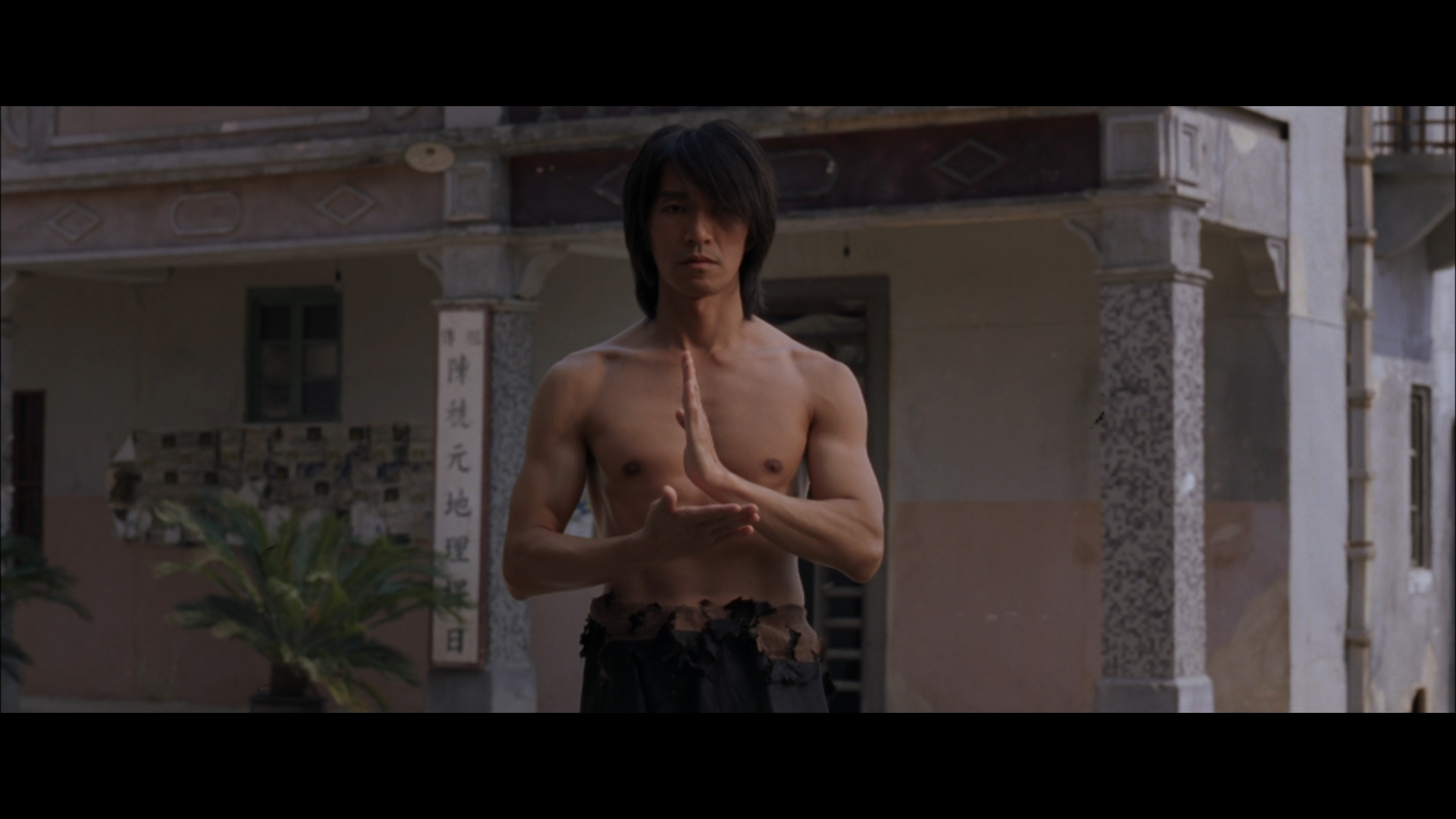 "Becoming a top Fighter takes time, unless you're a natural-born kung-fu genius, and they're 1 in a million."

Welcome back to Martial Arts March! In week one, I talked about Zhang Yimou's 2004 film, Hero. Having discussed Hero at length last week, I will say that it took it's characters, story, and setting, and gave them a very serious tone. However, we don't have that issue with week two's film, Stephen Chow's Kung Fu Hustle.

Released in the United States in 2005, Kung Fu Hustle is a movie I saw in theaters when it was given its wide release stateside. I don't remember how I first became aware of Kung Fu Hustle, but I was eager to see it when it came out.

Kung Fu Hustle was directed by Stephen Chow, who was approached to make the movie after the success of 2001's Shaolin Soccer, a movie I haven't yet seen but probably need to put on my "must watch" list after seeing scenes like this one.

If you watch that scene, it gives you a sharp look into the mind of Stephen Chow, and how he goes about making his films. Chow is a guy who has a lot of fun making his films and isn't bogged down by overly dramatic material. His movies are there to tell a story but do it in a fun and engaging way.

Set in the 1940s, Kung Fu Hustle tells the tale of the residents of Pig Sty Alley, a slum where the people live in relative peace away from the big city where the notorious Axe Gang has seized bloody control. During these events, two dim-witted criminals attempt to lie and say they are members of the Axe Gang in an attempt to extort the residents of Pig Sty Alley and actually join the gang itself. Their actions bring the attention of the Axe Gang to the Pig Sty and its residents, some of whom aren't necessarily who they seem to be.

Stephen Chow not only directed Kung Fu Hustle, but he also stars in the film, playing the character of Sing, who is desperately trying to join the Axe Gang because he's convinced that the good guys can't win in the long run. The leader of the Axe Gang, Brother Sum, is played by Danny Chan, and I love almost every scene he's in. Chan comes off as just a ruthless criminal, willing to kill anyone for even the slightest perceived offense, but he does it with such style that I couldn't help but love the character.

The couple who run Pig Sty Alley, know only as the Landlord and Landlady are played by Yuen Wah and Yuen Qiu. The Landlord is lazy, greedy, and obviously willing to take bribes from the residents while the Landlady is every ballbusting stereotype you can think of. She always has a cigarette in her mouth and berates every single person she comes in contact with. The sheer comedy that these two bring to the table in some scenes is terrific to watch, and one scene in particular I remember had the theater laughing loudly when I first saw Kung Fu Hustle in 2005. 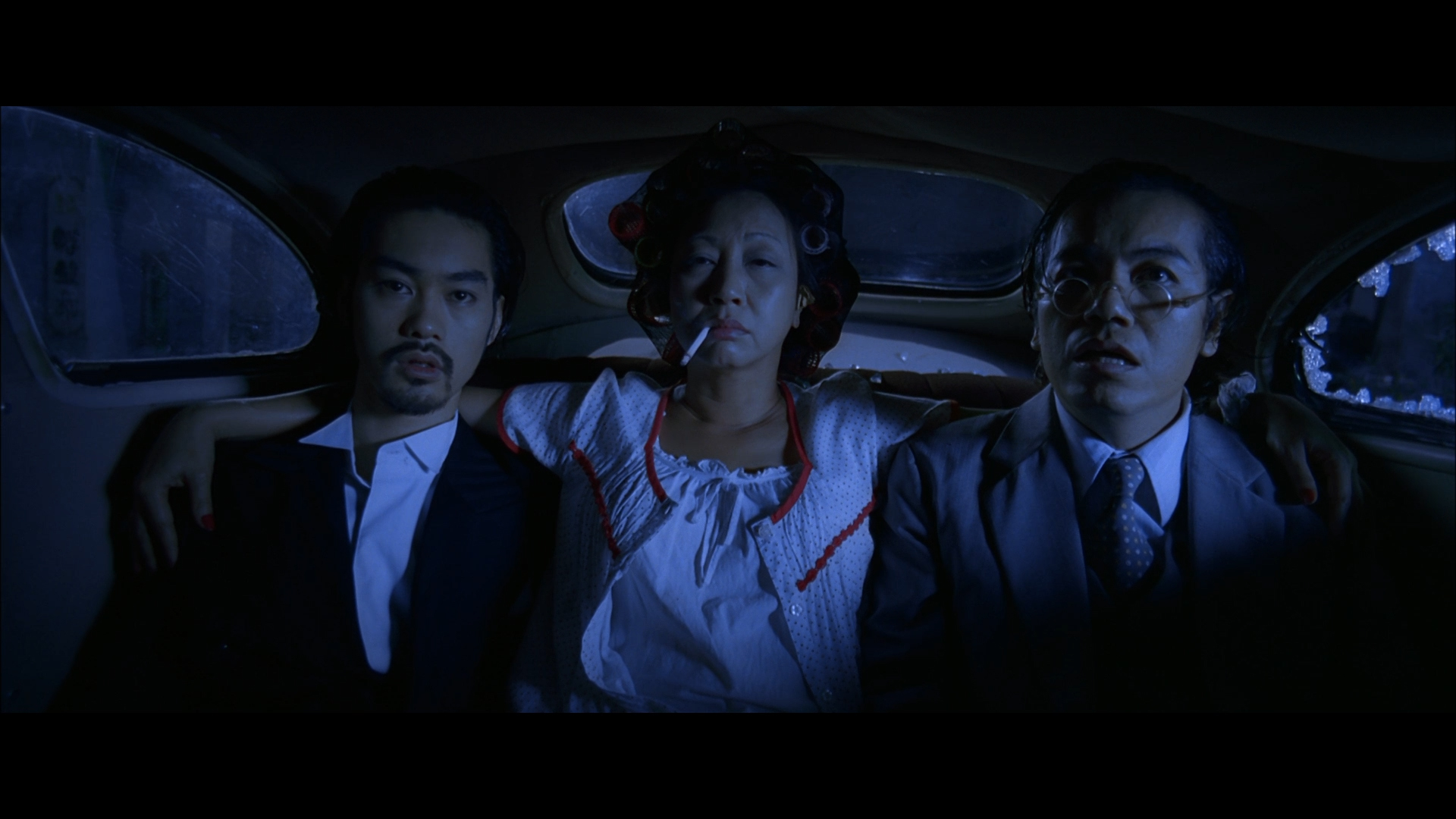 And despite not showing up until after the hour mark of the film, my favorite character in Kung Fu Hustle is the main villain, known as The Beast, played by Bruce Leung. The Beast goes down as one of my favorite villains ever not because of how evil he is (he even says he just wants to fight the best and either kill them or be killed by them), but because the guy is just so unassuming. Hell, the first time he appears in the film, he is sitting on a toilet, reading a newspaper, and wearing flip flops. 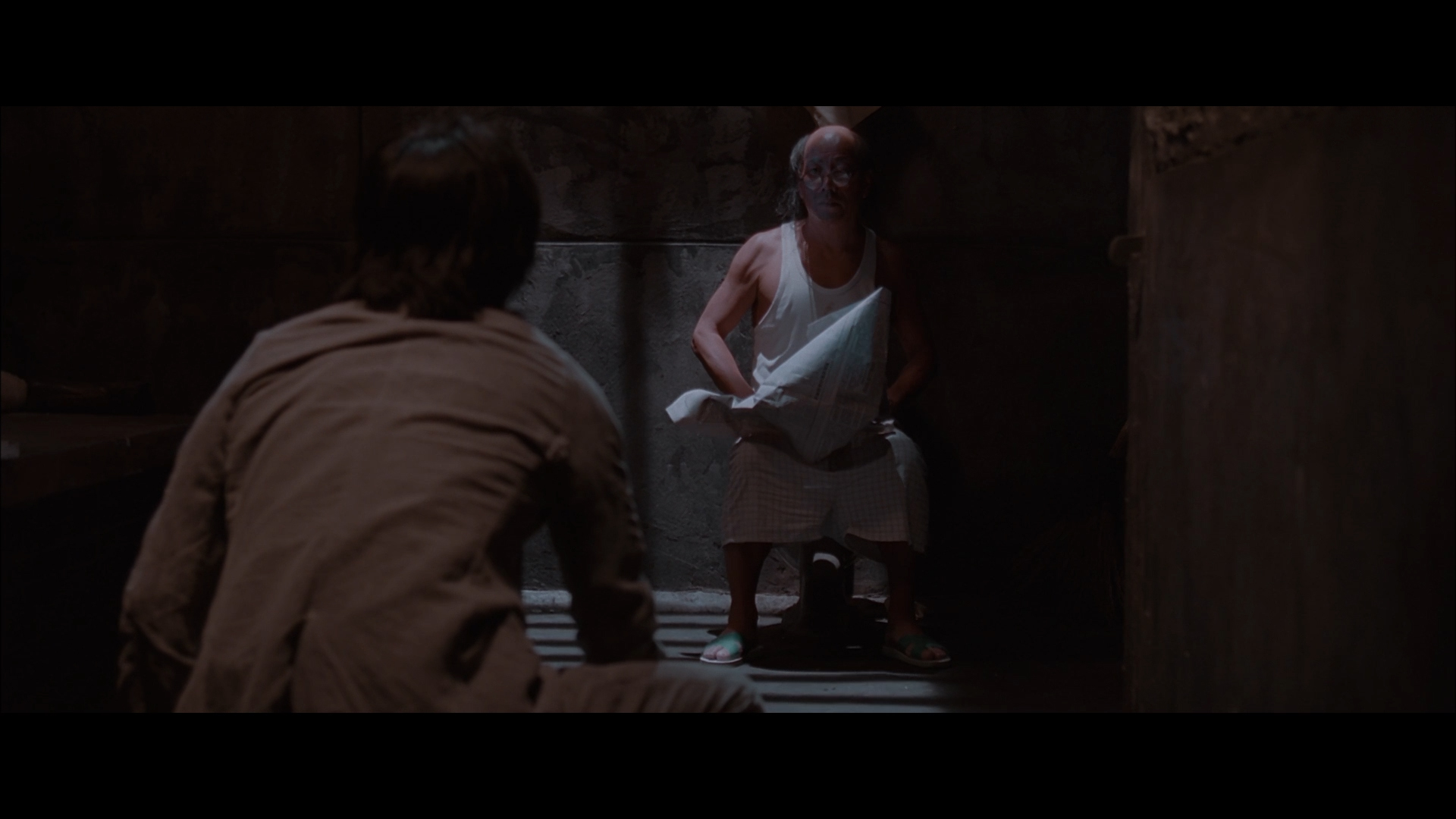 The main villain of "Kung Fu Hustle" makes his entrance.

When The Beast shows us what he can do, you are taken aback at just how powerful this guy is. It's one trope of most western movies that the villain is super sleek, or demonic in nature. The Beast is basically a slob that looks like he might ask you for money when you first see him (though he cleans up later in the film, and I enjoy the change in appearance he makes).

I don't usually do this, but I will talk about one of my favorite fight scenes ever. It's the musician fight scene, and anyone who has seen Kung Fu Hustle knows the fight I'm talking about. Two "musicians" are hired to defeat some members of Pig Sty. The ensuing fight scene, which runs a total of about five minutes, is an imaginative take on a martial arts fight. The music and how it perfectly flows with the actions of the fighters is just one reason this fight is so good. The fact that the two musicians use what I can only describe as a magical Guzhen, which is apparently different from a Guqin, blew me away.

I mentioned a Guqin in my Hero review, and if you'd like to know the difference, the Guzhen has 21 strings, while a Guqin has 7. Here is a blog post that discusses more differences between the two instruments. When I first saw that scene, it took me from "this movie is pretty decent" to "holy shit, I love this movie" in five minutes.

Earlier I said that Kung Fu Hustle doesn't take itself seriously. For example, some of the fighting and action are what I can only describe as "cartoonish" in nature. For example, a foot chase between Sing and the Landlady shows their feet moving as you'd see in an old Looney Toons cartoon.

Kung Fu Hustle does know when to be serious and when it needs the humor, and although this can be a tricky tightrope to navigate when making a film like this, Kung Fu Hustle does it better than most. The movie is able to turn a comedic moment to a serious one and back again with almost effortless ease.

If there are some negatives I can say about the film, some of the CGI is a little lacking, especially when Sing "heals" himself. Even for 2005, the CG left a lot to be desired. I also felt let down by the final fight scene between The Beast and Sing. Without spoiling it, you're expecting this vast epic fight between the two, and while it does have an epic ending, the conflict leading up to it isn't.

I will say the same thing about Kung Fu Hustle that I said in 2005: go and watch it. It's a ton of fun, and even watching it again for this review made me appreciate it all over again. 4.5 out of 5 film reels.

Coming up next week, we're going to look at Curse of the Golden Flower.