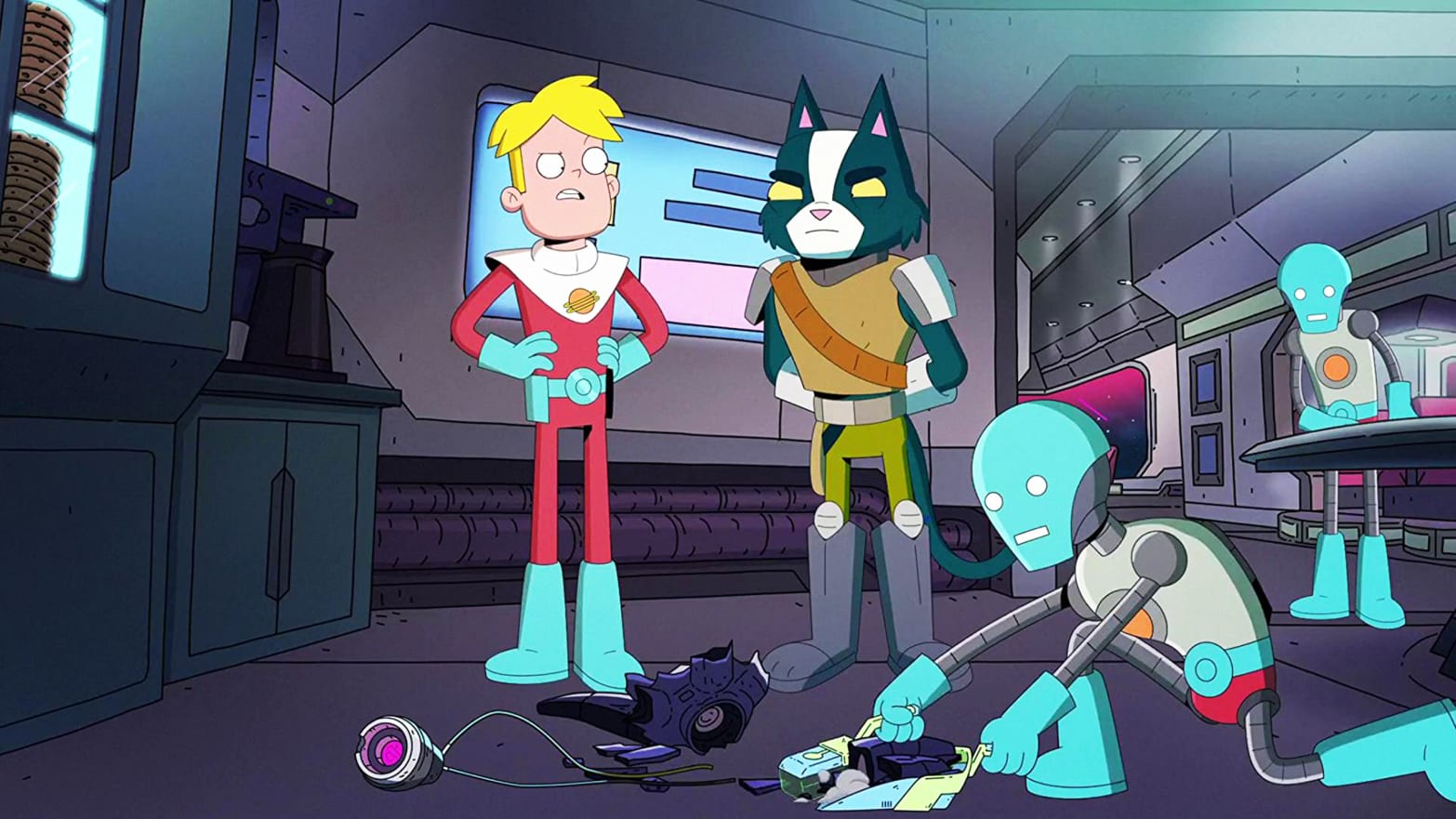 Back in late 2017, I began to see a trailer for a tv show that was debuting in early 2018. The show was called Final Space, and boy did it check a bunch of my boxes. Sci-fi? Check. Gorgeous-looking animation? Check. Good cast of voice actors? Check-a-roonie. Trailers like this one got me pumped for its debut. What did I think? It's complicated but I'll try to explain why.

So for those who've never heard of Final Space, it is the creation of Olan Rogers who honestly doesn't have a vast list of achievements before the debut of the show. He played Walt Disney in the film As Dreamers Do, a film I didn't know existed and you probably didn't either so here's a trailer for it. He also had a guest appearance on Conan and also...sigh...Annoying Orange.

From what I've been able to determine Olan Rogers wasn't some guy with a lot of pull to his name. It's not like Tom Hanks who was able to use his fame, money, and connections to get Band of Brothers made. I don't know what made Conan O'Brien throw his money and resources behind Rogers, but I'm glad that he did.

Final Space takes place in the future where humanity can travel among the stars using starships and something called light fold drives. The show centers around the protagonist, Gary Goodspeed (voiced by Olan Rogers himself), an inept astronaut who is imprisoned aboard the Galaxy One for five years after accidentally destroying 92 Star Cruisers while posing as a member of the Infinity Guard(the elite force of the galaxy), just to try and impress Quinn Ergon (voiced by Tika Sumpter) who is also a member of the Infinity Guard.

Gary, to put it mildly, has been going stir crazy on the Galaxy One being at the mercy of the ship's AI computer, Heuristic Unified Entity, or for short HUE (voiced by Tom Kenny). HUE is essentially Gary's warden and supervisor all rolled into one. HUE has pretty much been Gary's closest thing to what could be called a "friend" over his five-year sentence, which is the exact opposite of KVN (pronounced Kevin and voiced by Fred Armisen) who Gary hates with an utter passion.

KVN is designated as Gary's "Deep Space Insanity Avoidance Companion" and his nonstop bothering of Gary plus his other antics made him utterly loathe KVN. One of the funniest moments of the show comes from a later episode between Gary and KVN that I won't dare spoil for you.

In the first episode, Gary encounters a creature flying through space that he names Mooncake (also voiced by Olan Rogers). Gary instantly takes to Mooncake, which could best be described as a flying green blob that can destroy planets. Mooncake himself is being pursued by dark and evil forces led by the Lord Commander (David Tennant) and bounty hunters like Avocato (Coty Galloway), who in the middle of all this is looking for his son Little Cato (Steven Yueng).

The Lord Commander intends to use Mooncake to open a portal to something called Final Space, leaving Gary and his crew as the only ones that can stop him.

If that premise is interesting to you I would certainly encourage you to give the show a watch. If I could think of a show to loosely compare Final Space too that would be Futurama. Both are science fiction and use humor throughout their episodes. Both deal with deep and depressing subjects, but that's where they diverge.

Futurama I would place as probably the greatest TV shows of all time, while Final Space I would put in the "good but not great" tier for one reason I'll get into later. Final Space does have some hard-hitting moments, in particular, the interaction between Gary and his father John Goodspeed (voiced by Ron-freaking-Perlman). In a later episode, they have one of my favorite interactions from the TV series to date.

The true star of the first season, however, is David Tennant. Tennant for many nerds should need no introduction. Doctor Who, Good Omens, Jessica Jones, and Duck Tales are just some of the projects on his resume. Tennant doesn't normally play villains and to hear Tennant voice one is a real treat.

When the Lord Commander is introduced, the character who sees him starts laughing at how short he is (the Final Space wiki lists him at 3'3) to which the Lord Commander does not take kindly. The man is tortured until death using the Lord Commander's abilities and his corpse is disposed of for one of his underlings to eat. It happens in the first episode and pretty much drives home that this is NOT a kid's show.

Having talked about the characters a bit, I want to touch upon the animation.  Final Space is one of the most beautifully animated shows I've seen in recent years, and some of the scenes, particularly the ones that take place in space, are just a marvel to look at and I have to give the animators and artists all immense credit for the style and feel of the show. One particular highlight of the show in terms of animation, music, and sound comes from the fourth episode when Gary has to go and capture energy from a dying star to transfer to the Galaxy One. As Gary hops into his spacesuit to travel towards the star he tells Hue to "play the good stuff," and Shelby Merry's "Gallows" begins to play as he flies towards the star. The entire scene is just so damn cool and one that I've watched several times over. I do have one major issue with Final Space and that is the main character Gary Goodspeed himself. Olan Rogers' voice just doesn't fit for him. I know that sometimes voice actors can take a season or two to settle into their roles and find their groove.

In season one of Final Space, I found Gary's voice and personality sometimes annoying, which isn't something you really want when you're supposed to be rooting for this guy. There are some moments of the show I feel are really hurt by Rogers' voice acting, which is a real shame in my opinion.

Even with such a large issue, I would recommend Final Space to lovers of science fiction or just good stories in general. While Final Space isn't perfect by any stretch of the imagination, it's a new idea that I want to follow and see if the show can settle into its own as time goes on.

The second season of Final Space has already aired and the show's official Twitter account has apparently already teased that the show has been renewed for a third season, though nothing has been officially announced.

Four out of five film reels.