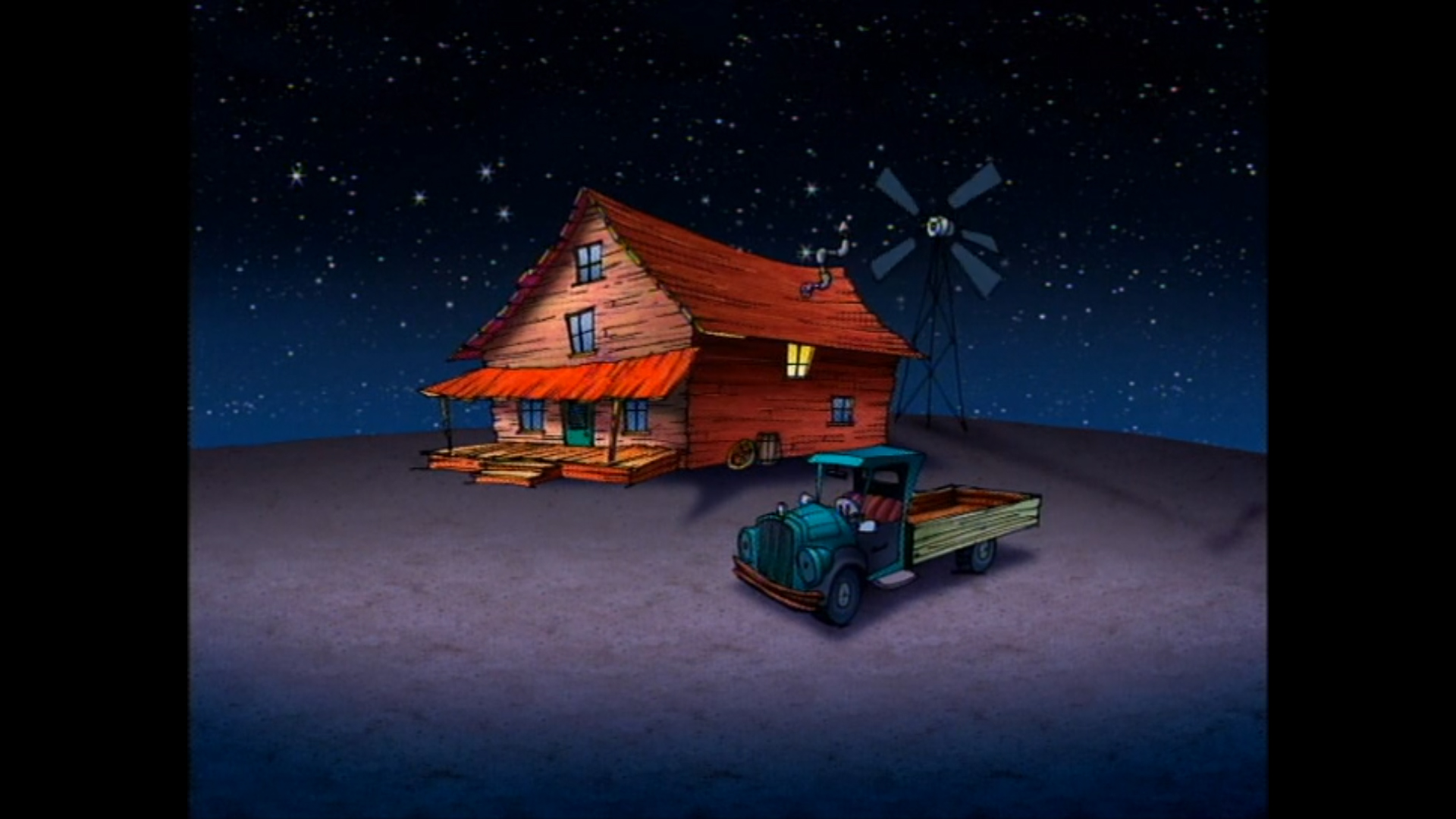 With Animation April ending, I decided that I wanted to discuss a show that most people have seen or at a bare minimum heard of. The first three weeks covered shows that were underrated gems that didn't make it past one season, but I wanted to sink my teeth into a show that had multiple seasons and is fondly remembered. That show is, of course, Courage the Cowardly Dog.

In doing my research for this article, I discovered that Courage the Cowardly Dog began it's life years before it was a TV show. It was an animated short that was produced by Hanna-Barbera and funded by Cartoon Network. Courage was brought into existence by John R. Dilworth, who made the short, The Chicken From Outer Space in 1994-1995. The original short is on youtube, and while the quality isn't great, you can view it here.

I have some takeaways from watching that clip. The animation was a little rough looking, though it was the style that would come to define the show. Courage's voice was a bit off even though the screams are similar to what he would sound like. Finally, Courage had some dark moments in it, for example, when the Outerspace Chicken gets into the Chicken Coop and kills every chicken in there just in time for Courage to see it holding the last chicken by its neck and snapping it (albeit offscreen).

The short, however, was nominated for an Academy Award for Best Animated Feature in 1995, where it lost to A Close Shave, probably one of the best Wallace & Gromit films ever made, so I don't feel Courage got robbed here.

The movie was aired in 1996 on Cartoon Network and would become the defacto "Pilot," and then the show itself didn't debut for a full three years after that in 1999. Courage's premiere was the highest-rated episode of television in Cartoon Network's history at that time.

Courage the Cowardly Dog centers around three main characters and numerous side characters appear sporadically throughout the series. Still, it would take way too long for me to discuss them all at length. But the three main characters are Courage himself, voiced in the show by Marty Grabstein who from what I've found on his IMDB page had some appearances in Law & Order and a few voice acting roles here and there.

The Farmer, Eustace Bagge, was voiced by two different actors, in episodes 1-33. It was veteran stage and voice actor Lionel Wilson, but after he left midway through the third season, the role was taken over by another veteran actor, Arthur Anderson, for the remainder of the show. Anderson has a little gee-whiz fact as he was the voice of Lucky the Leprechaun from Lucky Charms cereal from 1963 up into the 1990s.

The last character is Muriel Bagge, Eustace's wife, who was voiced by Thea White. It seems her role in Courage was the only notable highlight of her career.

The intro of Courage the Cowardly Dog, which I would describe as iconic, is simple and sets up the show's premise. Courage was abandoned as a puppy and found by the kind and loving Muriel, who lives in the middle of Nowhere with Eustace. Eustace is the polar opposite of Muriel, vindictive, greedy, and cruel. But a bunch of creepy stuff happens in the middle of Nowhere, and Courage must protect both Muriel and Eustace and his home.

It's a simple premise, one that holds a ton of potential, and let me be the first to give John R. Dilworth and every single person who worked on the show all the credit in the world.  Courage the Cowardly Dog is probably one of the most unique shows ever created; the story ideas are all creative and memorable, and the villains range from fun to downright naughty. 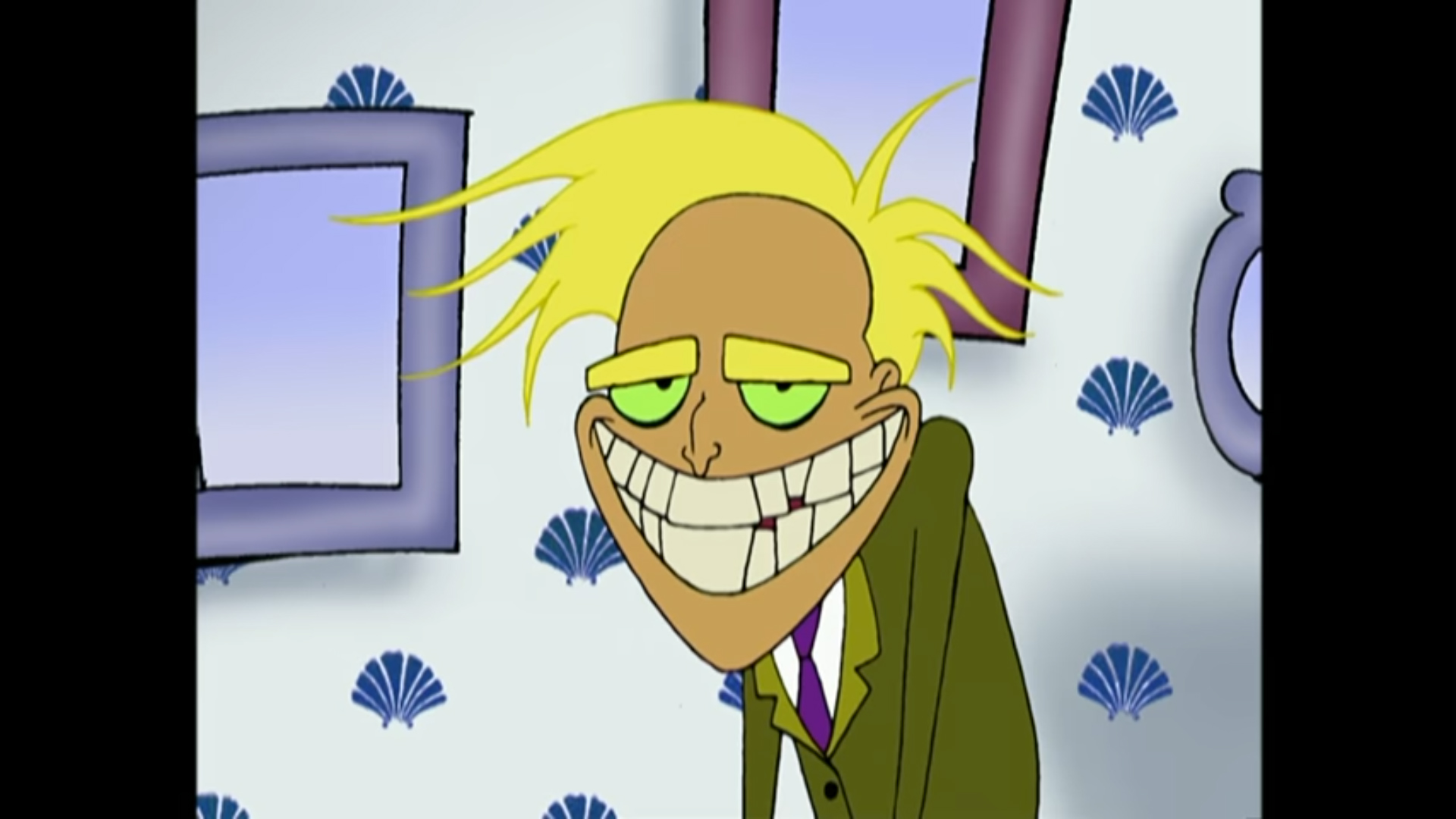 Admit it, you can hear this picture

Courage the Cowardly Dog dips into several different animation styles throughout it's run, traditional hand-drawn, computer-generated, and stop motion. The voice acting on virtually every side character is always spot on from the sinister gentlemen Jeeves Weevil to the echoing whisper of King Ramses. 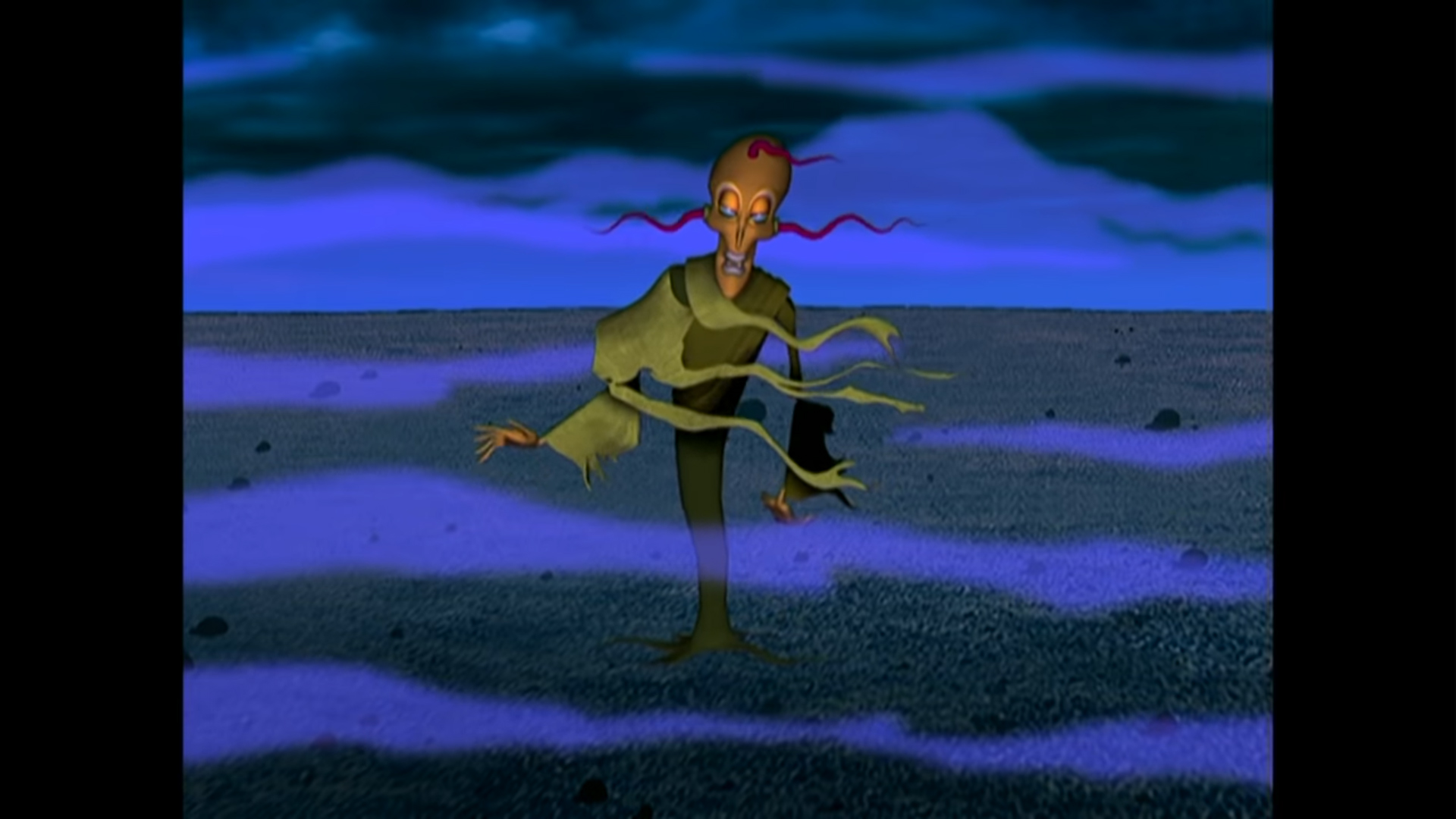 Courage the Cowardly Dog's greatest strength is the fact that it throws you curveballs with every single episode. When episodes with titles like "Freaky Fred," "The Magic Tree of Nowhere," "The Sandman Sleeps," or "The Uncommon Cold" start-up, you honestly just want to see what the writers, artists, and animators were able to create for that episode.

There are some recurring villains like Le Quack or Katz, but most of the villains are one and done, and that's a good thing because you don't want them to overstay their welcome.

Picking some favorite episodes for a show as great as Courage the Cowardly Dog is a tough one for me, but I particularly love episodes like "Freaky Fred," "King Ramses Curse," "Evil Weevil," "Robot Randy," and "Hothead." But I could watch any episode and have a great time.

Courage the Cowardly Dog garnered a ton of critical acclaim during it's run. However, the greatest mystery I've encountered during my research for this piece has nothing to do with any of Courage's rogues' gallery but as to why it was ever canceled/not renewed.

In my research for this article, I wanted to detail why a show as well-received as Courage seemed to not continue longer than it did. The problem is that with almost 20 years since Courage the Cowardly Dog ended, there is nothing concrete about it. I've seen everything from the show was too scary for children, which is a hilarious complaint to level against the show since the whole point of it was to be weird and unsettling.

The show also depicted a lesbian relationship in the season four episode "The Mask" between Kitty and Bunny. Conservative moms in the early 2000s didn't like that and threatened to sue Cartoon Network over the show, which, if true, isn't any less stupid than it would have been in 2002.

Whatever the case for its demise, Courage the Cowardly Dog has never truly left the cultural memory. It's fondly remembered by virtually every person who saw it and people who grew up watching it, particularly holding it in high regard. I would be remiss to not mention that last year a bunch of artists and animators came together to redo the entire episode of "Freaky Fred" with each artist/animator putting their own unique twist on parts of the episode. If you've already seen the episode and want to re-live it again, give it a watch, you won't be disappointed.

Courage the character taught many kids that it was okay to be scared of things, but true courage was facing your problems and trying to help others in the process. Courage was kind, loving, and willing to tackle otherwordly horrors to protect the ones he cared about and even total strangers.

Courage the Cowardly Dog is a fantastic show and a true masterpiece that stands the test of time to this day. If you have Amazon Prime, you can watch the series for free there, and there was a complete series DVD release. Honestly, it's almost criminal that Courage the Cowardly Dog hasn't gotten the Blu-ray treatment, and I'm hoping that Cartoon Network eventually gets around to releasing some of its old shows this way.

A timeless classic, if you've never seen it go watch it right now and experience it for the first time. 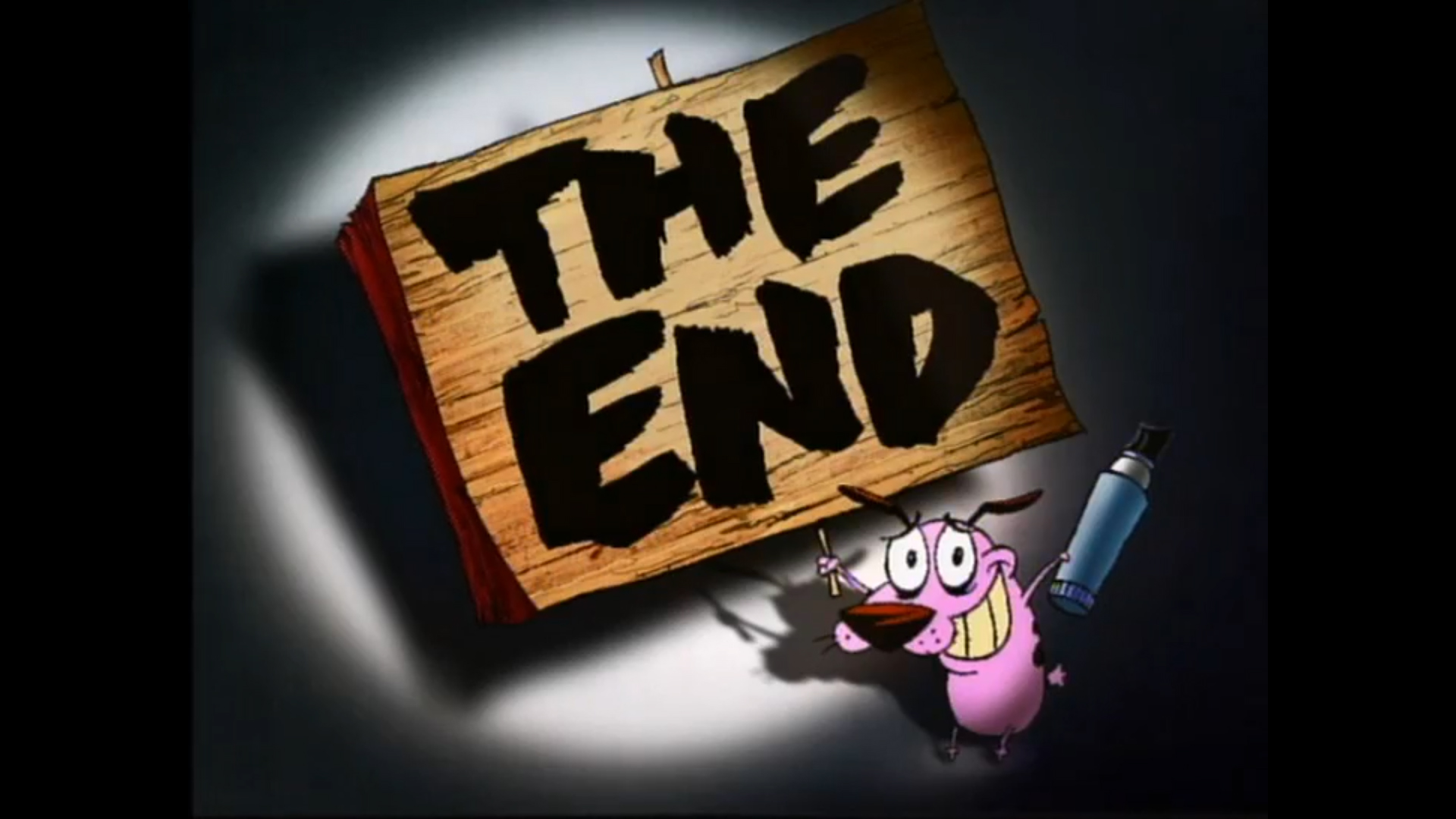