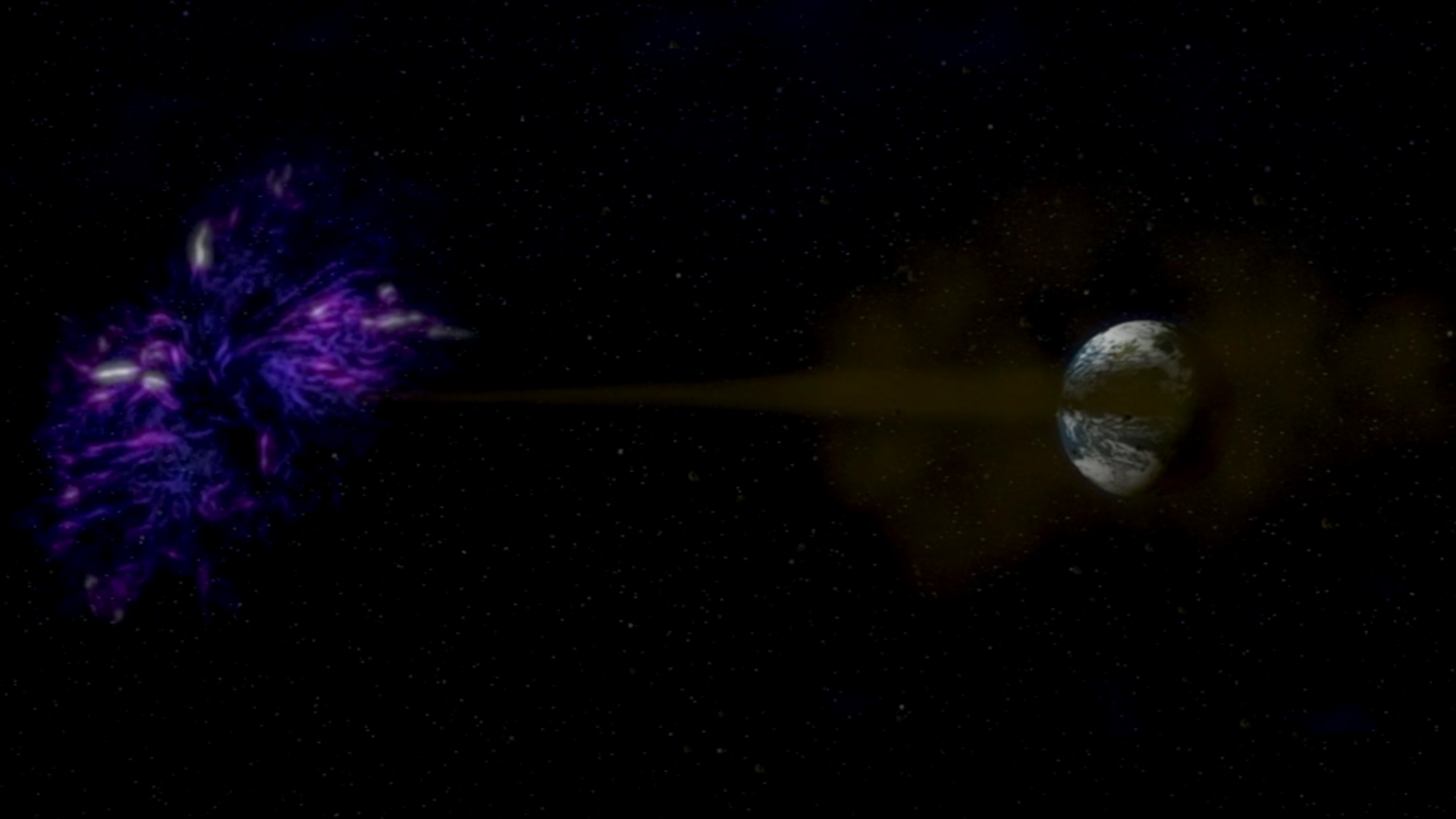 Note to self. Never do another Awful August again. That is if I want to keep my sanity. Never the less, here we are moving along towards the conclusion of Awful August, and man, did the random picker pick a movie. The title this time is Quantum Apocalypse.

Released in 2010 as what I assume was direct-to-video, this may have also appeared on the SyFy network since it's release occurred right around the time they changed the name from Sci-Fi to SyFy, and honestly, this movie is pretty much in their wheelhouse.

Quantum Apocalypse is in a genre that I have a great deal of experience with throughout my life, and that's the disaster movie genre. More than likely, you've seen one or more in your lifetime, and whether you like them or not is another matter, but for me, if they're done well, I've enjoyed many a disaster movie over time.  Independence Day, The Poseidon Adventure, and Twister are some classics that I enjoy watching to this day. While I'm not going to say every disaster movie is necessarily a good movie by unbiased standards, many are at least enjoyable. So, does Quantum Apocalypse fall into that category?

Of course it doesn't; this is Awful August. Let's dive in.

Quantum Apocalypse is the story of a bunch of people you couldn't possibly give a shit about who try and survive what has to be the most improbable natural disaster I've ever seen in a movie. This includes crap like The Day After Tomorrow's supercooled air being pulled down from the upper troposphere. The film describes what's happening as a black hole but not which is traveling into Earth's orbital path. It does things like mess with Earth's weather and even affects its gravity as it gets closer.

But you don't want to hear about that, let's spend a nice chunk of the opening watching mundane crap in the character's lives. For example, one of the characters, the President of the United States, President Scott, is given some news. For a solid 15 seconds, we watch him fail to register any kind of significant reaction to the news that the world is going to end.

Another character, Ben, is the mayor of some small town in Texas, and we get to watch him go into work and discuss day to day business with his subordinates. There's one point where Ben and a woman who works for the town are talking about economic plans for a solid 25 seconds, and it feels like it goes on even longer than that. It's not shot in an exciting way, and there is zero charisma from any of the actors. I went back to time the exchange just to see how much time was wasted. 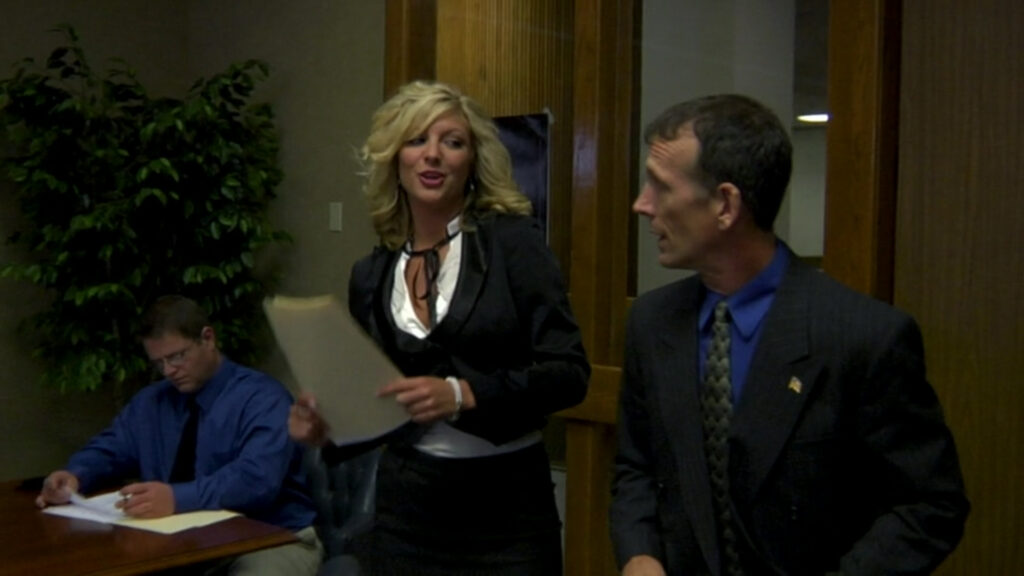 "I'm sorry I don't have any cash to make up the budget shortfall."

The hero of the movie is Ben's brother Terry, who is said to be autistic. In case you are wondering how autism is portrayed in Quantum Apocolypse, think Dustin Hoffman from Rain Man, and you're pretty much there. I'm pretty sure the actor watched said movie and based his performance off that. And while that would have been bad enough, they even reference Rain Man when Ben has a brief conversation with Terry about maybe getting his driver's license.

Terry looks for a way out of this movie

Trouble is afoot when the United States Space Agency detect an anomaly that is moving towards Earth. The USSA calls in two of the top minds to help solve this issue, and I hated both characters as soon as they showed up on the screen. The first is your standard nerd character who was so uninteresting I can't even remember his name. The second is Trish, and she is annoying as hell. They wanted to make her quirky and "out there" by having her dress like she just finished working a shift at Hot Topic. But I could forgive all that if the character displayed some kind of gravitas to make me respect her, but she does not. 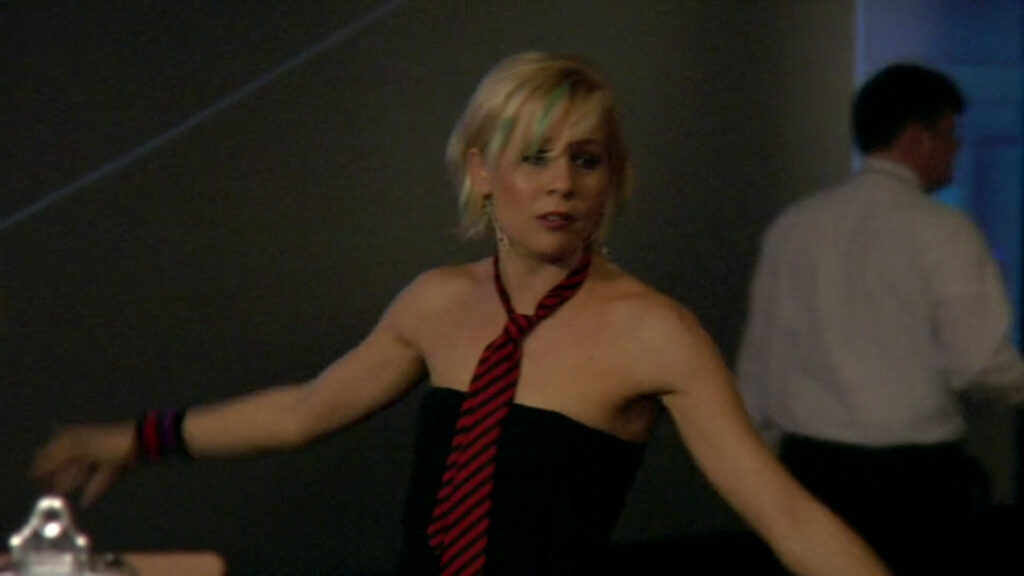 "I'm quirky because I wear a tie!"

The Long story short? The thing that looks like a black hole, but its not is going to hit Earth in a few days. The plan to stop it? By getting Terry to Houston to work with the USSA. Of course, Terry is super-smart and has figured out how to stop this "black hole." In the meantime, we need to have a lot of crappy CG shots of things going on. 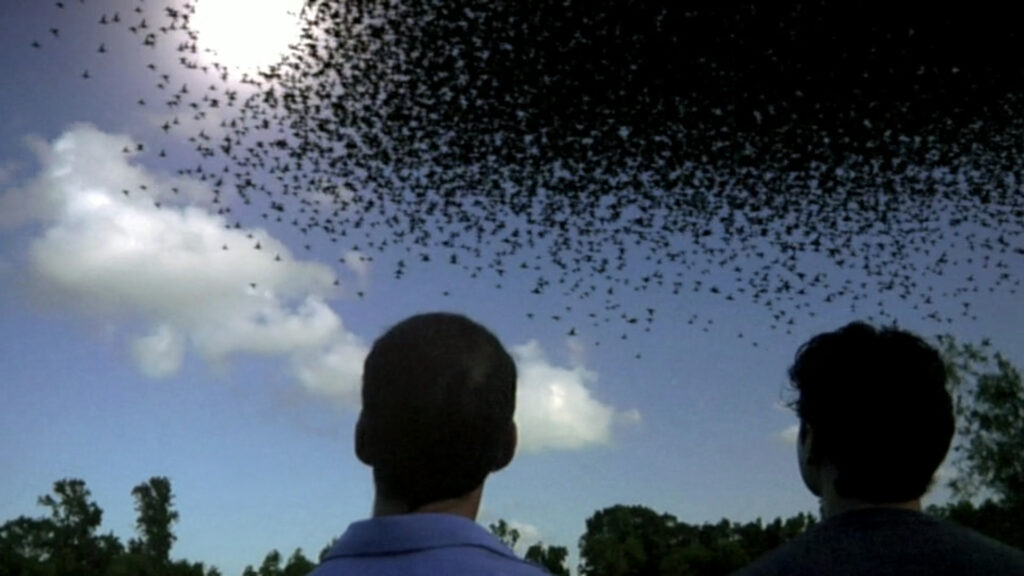 "Hey should we have the birds fly in FRONT of the sun in this shot?" "Nah, it's cool the audience won't notice." 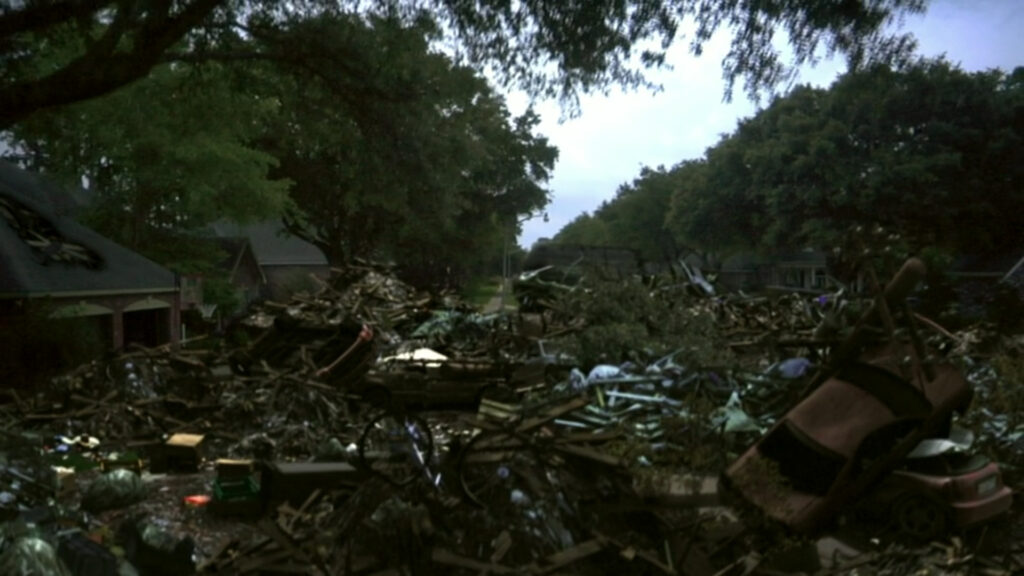 "Casualties were said to be in the millions of Pixels."

Those screenshots don't do it justice, but seeing this stuff in motion makes you wonder what the hell the people involved in this were thinking when they made it. Besides standard weather stuff that happens as the "black hole" gets closer to Earth, we seriously have a scene where Ben and Leo literally lift a car off a woman and throw it aside. 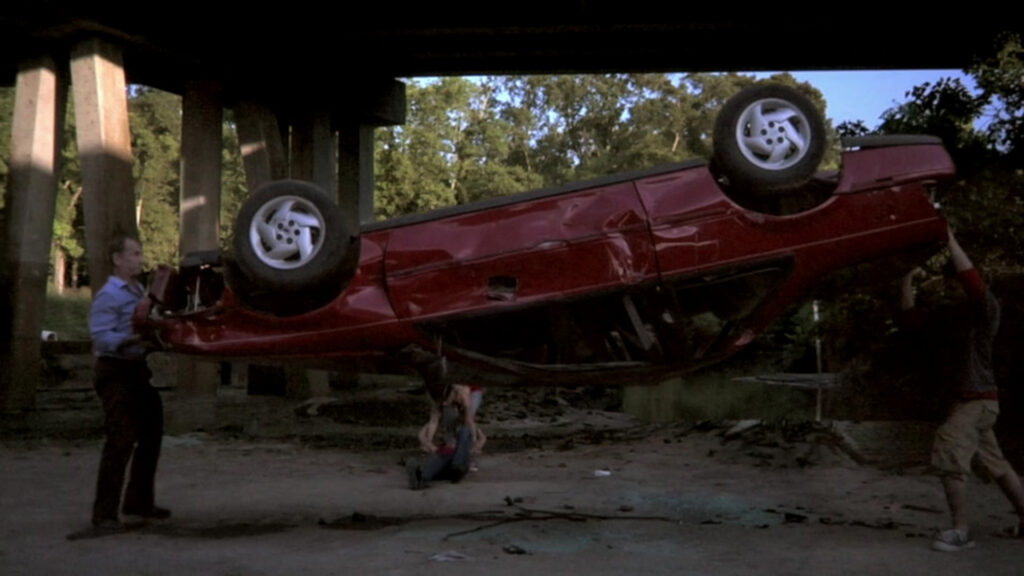 Eat your heart out Superman 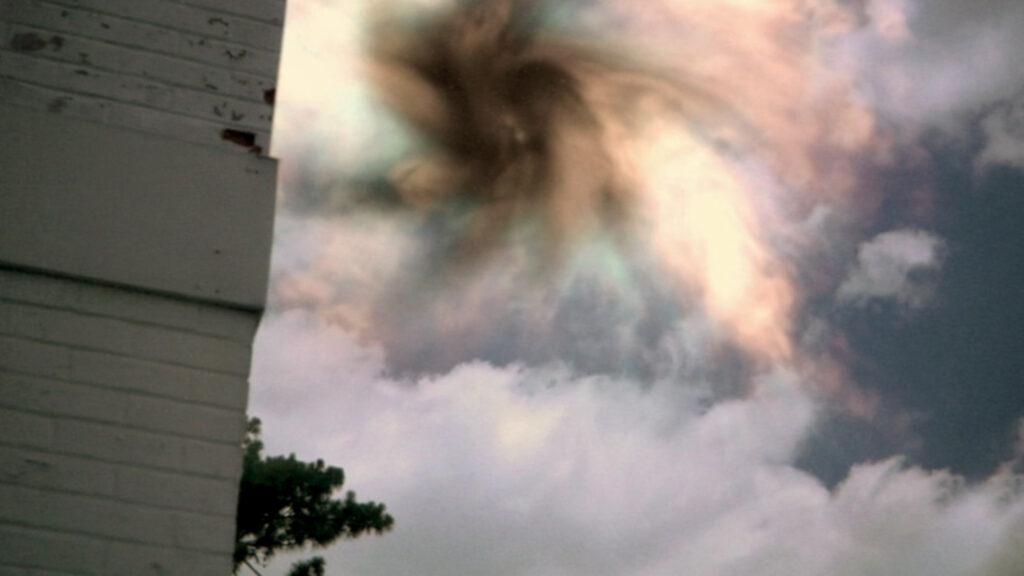 Oh, hey, may have a bit of a thundercloud in the distance there.

Of course, Ben and Leo separate with Ben telling Leo to stay with his stepmom and little sister. Of course, Ben takes Lindsey back to her house where they run into her crazy ex, who of course, takes the opportunity to shoot and mortally wound Leo and attempts to rape Lindsey. After stepmom shows up and shoots the ex-boyfriend (which happens entirely off-screen) the house is attacked by shitty CG. 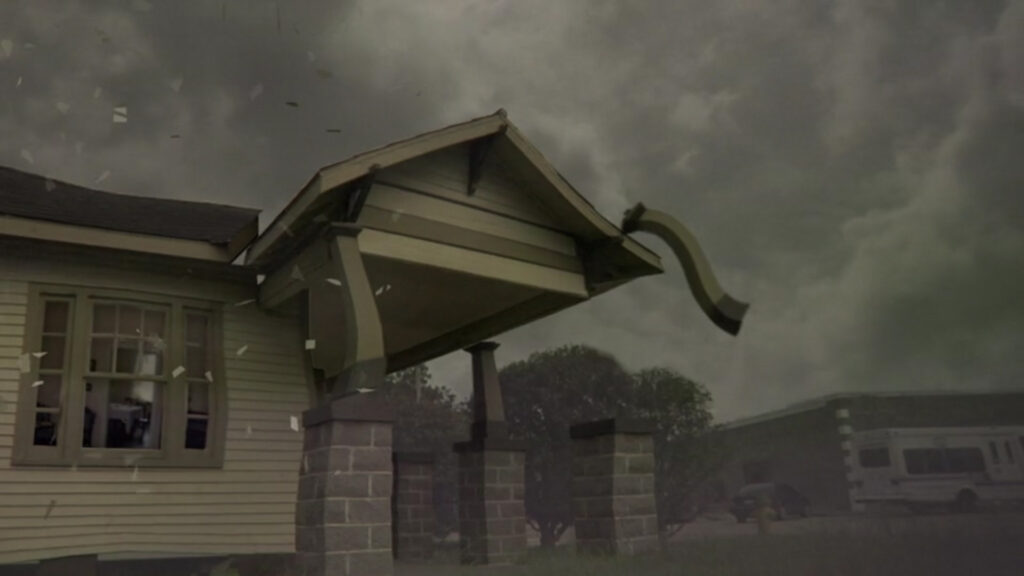 Ben gets Terry to Houston to bring it all home where he links up with Trish and nerd guy, and the solution they come up with to save the Earth is...shoot a nuke at it. Seriously, they shoot a  nuke, and that somehow negates this thing, and because it's gravitational pull is so powerful, it messes with time itself and causes everything to revert to before the whole mess started.

I'm glad my experience with this movie is over. There is more crap that I skipped or glossed over from the subplot with stepmom and Leo, to Ben's heart condition. But the movie's rewinding to the start pretty much means that it's all futile in being entertaining.