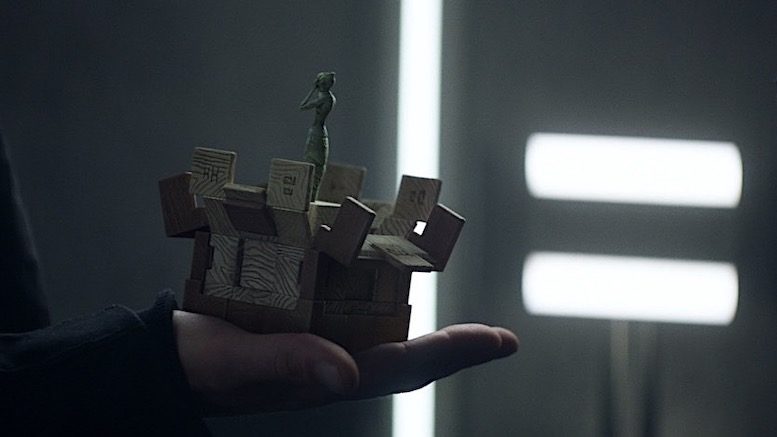 "The Collective do not forget one of their own..."

It should come as no surprise that the back end of any television season usually picks up steam. But there was undoubtedly a worry after four episodes of Picard, that the show was not progressing along fast enough. Luckily, an intense fifth episode got the latest Star Trek series back on course, and "The Impossible Box," the series sixth episode, sets a high bar for the rest of the series.

"The Impossible Box" has Picard and his ragtag crew finally reaching the Borg Cube, or Artifact, as they call it on the show. While Picard deals with the anxiety and stress of stepping foot on a Borg cube for the first time since his assimilation, Narek seems to have finally unlocked the key to extracting the information he needs from Soji.

Unlike this young series past episodes, "The Impossible Box" does an excellent job of evenly focusing on our two main plots: Picard's need and mission to protect and find Soji, and Narek and Narissa's mission to infiltrate Soji's mind to get the information they need. It was refreshing to have such a good balance, as this was one of the issues plaguing some of the previous episodes.

While we're on the subject of things being refreshing, this week's episode didn't start with a flashback, at least not a flashback in the true sense of the word. Instead, "The Impossible Box" begins with a dream sequence, with a young Soji waking up from a nightmare, looking for comfort from her father. This entire sequence, which is also revisited later in the episode, is brilliantly shot. Ella Gross, who plays the young Soji, was perfect in the role, and it's quite eerie how similar Gross and Briones look like they could actually be sisters.

And while I generally have found the Narek/Soji relationship and subplot annoying and even cringeworthy at times, I found it to work this week. In past episodes, you never quite knew whether Narek was actually in love with Soji, or if he was playing the long game. It becomes quite clear this week that it was, in fact, that latter, even while arriving at the final stage of his plan.

The scene Narek shared with his sister was also incredibly well done, and showed a turning point between the two. Narissa, finally having to admit, though reluctantly, that his plan was working. Even her astonishment, played out by Peyton List, later in the episode after Narek has extracted what he needs from Soji. That line, "Well done, little brother." The hint of surprise and approval, but with also the slightest hint of annoyance.

Even before getting to the Zhal Makh scene, there are some great beats between Narek and Soji, specifically Narek sewing what seemed to be the final seed of doubt within her. Seventy seconds, the length of every transmission Soji has had with her "mother," which, of course, we all know is an AI. Soji's immediate reaction, knowing that isn't possible, to using the Romulan scanning device and finding out the truth was thrilling.

"A sub-commander's bars are not for idiots. You risk losing them." -Narek

When we finally do get to the Zhal Makh chamber, another beautiful set, and masterfully shot, Soji has no one left, not even herself to trust, leaving only Narek to help her fill in the gaps. We go back to the dream sequence, and this time, Soji can see past the orchards and her father, only to see herself, almost like Pinocchio, on a workbench. Let the heartbreak ensue. Narek has fallen in love with Soji, but he also has what he needs. Even I was shocked when he did not hesitate to kill her, even with all the tears.

Both Harry Treadway and Isa Briones brilliantly performed in their roles here; Narek fighting back the tears while leaving Soji locked in the radiation flooded chamber, then turning on the Tal Shair cunning and preparedness when she escapes. And of course, Soji, giving Narek that look of betrayal as she punches a hole through the floor and runs away, all while becoming active and figuring out who she is.

Back onboard La Sirena, Dr. Jurati is doing a pretty decent job pretending like she didn't just kill the former love of her life, Bruce Maddox. Allison Pill does a superb job here because whether or not Agnus is being brainwashed or mind-controlled, she is still obviously reeling from the fact that she lost someone that she genuinely cared about, Even if she is directly responsible for the loss of said person.

For those on team Jurios (best I could come up with on short notice), you get a point. The chemistry these two have has been oozing with sexual tension for a few episodes now, and it certainly seems like these two loaded the torpedo bay. What's better than some, "I just killed my ex-boyfriend and covered it up," rebound sex?

Side note. Rios dribbling a soccer ball on a starship was written into this episode for me, and me alone. Maybe for my buddy, Simon too.

Raffi also has a great rebound episode, as she gets to use some of those ex-Starfleet Security skills to good use. While I may not have liked the scene with her son in the previous episode, it did give us back the version of Raffi I like best, and that's the one that was able to sweet talk a Starfleet Captain into giving Jean-Luc diplomatic clearance to board the Artifact.

"Change? The Borg? They cooly assimilate entire civilizations, entire systems in a matter of hours! The don't change, they metastasize!" - Jean-Luc Picard to Dr. Jurati

I saved the best for last because Patrick Stewart was at his absolute best in "The Impossible Box." Not since the episode "Family," at least in my opinion, has Sir Patrick put on such an emotionally riveting performance in Star Trek. The minute Jurati brings up his assimilation, Picard is not the same for almost the entirety of the episode. Before my wife fell asleep, I was telling her how I could feel Picard's fear and hatred for the Borg as Jean-Luc talked about their capacity to "cooly assimilate whole worlds," and how they "don't change, they metastasize."

For lack of a better term, Picard has PTSD, a couple of decades removed from his assimilation and later recovery from the Borg. Whenever they've been involved, Patrick Stewart has always turned it on, and Picard's fear and anxiety continue when he retreats to his study. The way Jean-Luc hesitantly asks for files on the Borg, Romulans, and the Treaty, you can feel that he knows he's about to have to relive some memories he doesn't want to.

This leads to the most riveting moment of the episode, and possibly of the series so far as Jean-Luc scrolls through the Federation's history with the Romulans and Borg. The Enterprise-E engaging the Borg Cube in Star Trek: First Contact, Hugh, than Hugh as Director of the Borg Reclamation Program, and then finally…Locutus. Picard's face perfectly overlaps over the face of assimilated self, and Jean-Luc proceeds to feel around for the Borg Implants over the side of his head that are not there anymore. The episode then goes to the opening credits. I was left absolutely shook, and had tears in my eyes.

And Picard's PTSD doesn't end there. He has beamed aboard the cube alone, and when he gets there, he is greeted by no one, at least not initially. Here is a man, standing alone on the one thing that haunts him the most, and I swear had Hugh not been there to calm him down and bring him back, his full-on Panic Attack, flashbacks and all, may have given him some form of a cardiac event. That's not meant to be funny. That's how much his past experiences with the Borg haunt him, and Patrick Stewart was pouring maximum effort into portraying that.

But Hugh is there; the Borg Picard almost used as a WMD to bring him back to reality. The way Picard is just so grateful, and then overjoyed to see Hugh was such a heartwarming moment. Here is someone who knows precisely what Picard has been through, and not only that, a familiar face, and a friend. Much credit has to be given to Jonathan Del Arco, who has come back into the role of Hugh so naturally, yet is very much not the same character he played in TNG.

There is this great moment when Picard is still coming down from his panic attack, and Hugh straight up tells him, "This is not a Borg Cube, anymore. This is the Artifact. And you are Jean-Luc Picard, not Locutus." It's such a reversal of their characters, right? In TNG, it was Picard and the crew who help Hugh find his humanity, and now it's Hugh reminding Picard of his humanity. Such an intense moment between these two.

Picard being reminded of his humanity was also a way to open his eyes to the reclamation program. How despite all his reservations, finally, for the first time looking at the Borg, even ones currently assimilated, he saw them as the victims they are. Even so, that doesn't stop one of the ex-borg from calling him Locutus as Picard and Hugh search for Soji, which actually ended up playing as an almost humorous moment, but oh well.

And that's the ultimate climax of "The Impossible Box." Picard has found Soji and offered his help, as the two escape the Artifact thanks to Hugh and the use of the Borg Queen's secret escape room. Let's not forget Elnor saving the day. Poor Elnor, who has been massively underused since joining the crew. It certainly looks like that will change next week, as he'll have to in all likelihood fight his way off the cube.

For once, even with the previews for next week's episode, I genuinely have no idea what's going to happen, and I like the excitement and mystery of that. Soji has been activated, and on the run. La Sirena is in serious trouble, and Elnor and Hugh are trapped on the Artifact. It's the most excited I've been going into a new episode of Picard, and I'm rife with anticipation for it to be next Thursday.